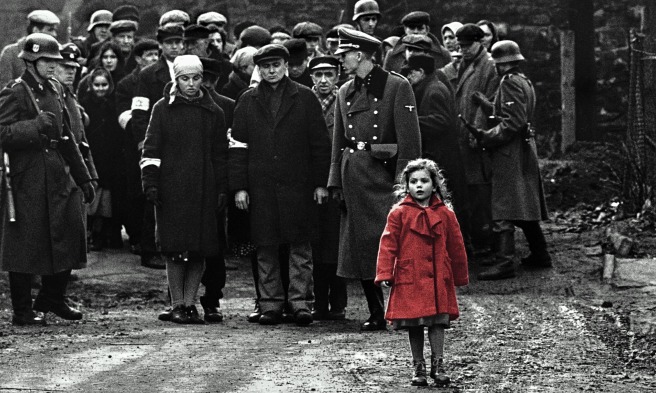 Okay, Jesus, what a movie.  I guess I should’ve known how deep into the Holocaust this film was was going to thrust its audience, but I probably wasn’t prepared.  I read somewhere, years ago, someone had said the best way to teach children about the Holocaust is to have them know nothing for years until they get to a certain age, and then to take them to the Holocaust museum so they can see the horrors for themselves.  It always seemed to me like it would certainly make an impact.  I don’t know when I first learned about the Holocaust and the goings on of the second world war, but it was long enough ago that it’s hard to really understand emotionally what went on.  It just sort of happened.  That number, 6 million dead, is so huge that it’s hard to wrap your mind around it.

Well, I think Schindler’s List is the best way to force you to comprehend the horror of what happened.  Before watching this film I saw that it had a runtime of over three hours, and I guess that made sense considering the material, but I wasn’t eagerly anticipating 180+ minutes of staring at a screen (ignoring the fact that I do that a lot anyways).  But near the hour mark, during a long sequence in which the Nazis liquidated the Krakow ghetto, I was both glued to the screen and desperately wanted to stop watching.  In other words, the movie does its job very well.

There are multiple moments in which someone is shot in the head, and in several instances you learn their name and get just enough time to form a picture of that character in your mind… right before they’re executed.  It got to the point where anytime someone said “hi my name is” I winced, as if someone was about to slap me across the face.

The film’s brutality is relentless, but it is also mostly pushed into that one sequence of the movie.  The rest of the film is equally terrifying and dreadful, but it’s really based on the sour taste left in your mouth from the ghetto liquidation scene.  I think the point was to show the constant fear under which people in the concentration camps lived.  Not everyone died, but they were always afraid they might, and as a viewer no one felt safe.

The film is centered on German Oskar Schindler (Liam Neeson), a businessman who really just wants to be successful and make money.  When the film begins, Oskar sits quietly at a table by himself, surrounded by celebratory Germans.  He eyes the room like a snake if I were more sure that snakes like to feel out a crowd. 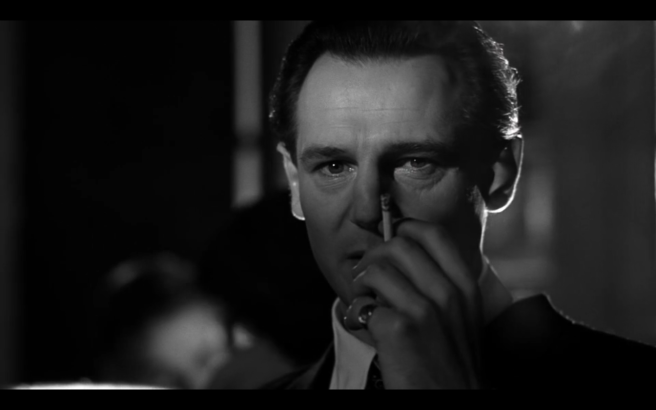 I mean look at that guy, he either wants to make love to you or kill you, and he’s the good guy.  The point is, from the very start, Oskar is up to something.  I had never seen this film before, and I had the feeling that he was already planning on undermining the Nazis, trying to smuggle out a bunch of Jewish people or something like that.  I wasn’t really sure what his list was, but it was clear he was a man on a mission.  In this scene he targets the Nazi military generals who are in the room, and he buys them a round a drinks.  By the end of the night Oskar is drinking and celebrating with them, posing for photos.  In one shot, the Nazi general blocks an attractive woman out of the photo so he can be closer to Oskar.  The scene sets up that he is charismatic, charming and, again, up to something.

Oskar’s celebrating always feels like its leading to something, but that something is not helping out the Jews, yet.  Instead he wants to set up a business, and all he cares about is making money.  In fact, Oskar knows he can profit off the war, and that’s why he’s cuddling up to the generals.

He starts a factory to produce enamelware (pots and pans), and he hires a workforce composed almost entirely of Jewish workers, with the help of Itzhak Stern (Ben Kinglsey) who has connections within the local Jewish community.  Right away business is booming, and in a conversation with a woman one night (Oskar is also a womanizer), he says explicitly that this business is outperforming any of his past businesses because of the war.

So Oskar’s not the knight in shining armor I thought he was, but that also makes sense considering he’s a German, and, you know, most German Nazis sort of thought the Nazis were good.  This also means Oskar will go on his own journey and become a changed man which is better than something like Superman where he’s just the same the entire time.

Oskar’s factory uses a Jewish workforce because they’re cheaper to hire, and Stern ensures that the workers are all considered necessary by the Nazis so that they can remain at the factory rather than be shipped off to concentration camps.  During this time, Oskar Schindler still cozies up to the Nazis, knowing that being on their good side is good for business.  He bribes them, sends them gift baskets, etc.

We are then introduced to Amon Goth (Ralph Fiennes), the true villain of the story.  He is the Nazi general assigned to set up the Plasznow concentration camp, and he oversees the ghetto liquidation.  He’s horrible, and he’s ruthless.  Once all of Schindler’s workforce is rounded up, he angrily confronts Goth, though not until he charms him first, and says this is killing his business.  Schindler and Goth work out an agreement in which Schindler can keep his workforce.  As time goes on, they continue a working relationship in which Schindler supplies Goth and the other generals with alcohol for their parties, and Goth gets extremely drunk.  It’s odd to watch the movie’s hero have such a strong working relationship with the devil, but it’s all in service of his business.

In one scene, a woman tells Schindler that many of the Jews consider his factory to be a safe haven because if you work there, you won’t be killed.  Schindler lashes out at her, demanding that people not say these things.  The woman was hoping he would hire her parents, thus ensuring their safety, and Schindler eventually does.  This is during his transformation from a money-first businessman to a people-first human.  It seemed unclear to me if he realized that his factory was considered a “safe haven,” or if he just didn’t want people to go around saying that, knowing that his working relationship with Jewish workers could antagonize him with the Nazis.

As the story progresses and the German begin to lose the war effort, Goth ships people to Auschwitz.  This is when Schindler and Stern make Schindler’s list, a list of people who will be protected from the infamous concentration camp and instead sent to work at his factory, now making ammunitions for the German war effort (though purposefully unusable ammunitions).  The list is as long as he can possibly make it, and he saves approximately 1,100 people.

The war ends when the Germans surrender, and Schindler flees but not before saying goodbye to his workforce which acknowledges his role in saving their lives.

This film is visually very beautiful, shot in black and white with images that feel very much like portraits of tragedy that you’d walk by in a museum.  Of course, the content is horrifying and disgusting, and that’s mostly embodied in Goth, who shoots people in the camp from his balcony while walking around shirtless and, at night, often very drunk.

I’m trying to think of what this film is about, other than showing the horrors of World War II and the Holocaust.  Beyond the value of a human life, I think this film is about power.  There is a scene, up in Goth’s balcony safely above the concentration camp below, in which Goth and Schindler discuss what power means, after a long night of drinking.  Goth is so drunk that he stumbles over himself, his hair no longer firmly stretched over his head as it is when he’s put together in the mornings.  Schindler, though, is still composed.  He’s always composed, and Goth notes that Schindler’s ability to keep his cool is a sign of power.  Schindler then goes on to discuss how real power is having the ability to do something and then not doing it.  His example is an emperor pardoning a man who would surely be killed for his alleged crimes.  He is telling Goth, basically, to not kill so many Jews.  Sure you can, because during the war there were no negative consequences for the Germans (obviously this would change), but you shouldn’t.

Throughout the film Schindler has his own power.  He’s always in command, whether it’s through bribery or charisma or because he’s saving someone’s life.  He does experience his own personal growth, but from the moment we first see him onscreen, he’s a very powerful man.  It helps that the actor is incredibly tall so he often towers over people.

So back to that other thing about the value of a human life.  The film does a good job of making everyone feel expendable, thus recreating the feeling of what the Jewish people felt during this time.  Watching a woman be shot in the head moments after introducing herself and briefly discussing her time at the University of Milan was troubling to watch.  I can’t count how many bullets to the head there were in this movie, but that image of a person falling limply to the ground is deeply disturbing.  It really did make each person look like nothing more than a dead person who is waiting to die, and that’s how it felt to be in those camps, at least based on the discussions among the Jews we see onscreen.  In one scene, Goth’s personally-picked maid (also Jewish) describes her intense fear to Schindler, saying she’s 100% sure she’ll be shot in the head like the others.

This film made me think about mortality and life in a different way for a little while as I watched it.  The effect it had on me was the same one as what the writers of The Walking Dead aspire to, but it had a reason to exist in this case.

The events of this film were so horrible and vile that despite the happy ending, you’re left with a sick feeling.  In some ways it feels like Spielberg tried to bring his customary Spielbergian uplifting ending to this story, but it was washed out like a flash flood of misery.  It’s really like you were stuck in a nightmare and then you just finally woke up.

But the story also tries to tell us that there is still good in the world and there was some good in the world at that time.  The film ends with the freed Jewish workers walking across a field, still in black and white.  Then it fades into color as many of the remaining survivors (at the time of the movie’s filming in the early 90s) continued the walk across the field.  The story then tells us about the survivors and their offspring.  Schindler’s list led to over 6,000 people being alive when you account for future generations after the war ended.

So the movie tells you that something good happened.  It’s a familiar Spielbergian ending, and while that may seem cheap, as if we’re supposed to smile in spite of all the violence we just watched, maybe it’s supposed to comfort us when we need it most.  It’s like the final sentence of his thesis paper on what it means to be human, and the frightening gap between existence and life.