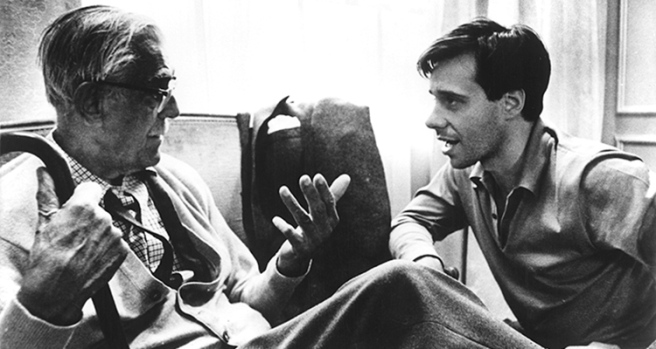 Duel and Nocturnal Animals made me afraid of a lonely highway, and Targets makes me afraid of drive-in movie theaters.  I had no idea what this film was about going in, and it’s about a serial killer with a sniper.  So, just be aware of that.  Beyond the mass killings, though, this film is about old and new.  It’s about a transitional period in society, and if anything, the 60s feel like a blend of past and present.

The story begins with a horror film, and we quickly realize that we are at a film screening for a new picture directed by young Sammy Michaels (Peter Bogdanovich) and starring Byron Orlok (Boris Karloff), an aging movie star who declares his retirement from the movie business following this latest picture.  The announcement angers the studio head and worries Sammy who had Byron in mind for his next project.

*The film was put together by producer Roger Corman, angling to assemble something based around previous footage of Boris Karloff (in the movie within a movie) and the two shooting days for which he still had him under contract.  When Bogdanovich came aboard and worked up a story outline with then partner Polly Platt and was able to get Karloff to sign on for five days.

The story bounces back and forth between Byron’s internal crisis and the life of a young man named Bobby (Tim O’Kelly).  Now, our introduction to Bobby follows a conversation between Byron and Sammy in which Byron says that he’s too old for Hollywood.  We then glimpse Byron through the crosshairs of a gun held by Bobby, really proving the point that the young are taking over the old.

Bobby likes guns, and in this time period that only seems to add to his image as a nice young man with a bright future.  He’s married, has a great relationship with his parents and hunts with his father.  On multiple occasions we see him chewing a candy bar, cruising down the road in his Mustang convertible and eating a packed lunch like a middle school kid… only he does the latter while sniping innocent people on the freeway.

See, Bobby’s a bit of psychopath.  He almost confesses his urge to kill to his young wife, only to back off the topic.  The next day Bobby shoots both his wife and his mother and leaves behind a note indicating the premeditation of the murders as well as his intention to kill more.  He begins a shooting spree on the freeway before a brief car chase takes him to a nearby outdoor movie theater.  The movie being shown that night is the one we were shown at the very beginning of this film.  It’s the premiere of Sammy’s collaboration with Byron, and both he and Byron are expected to be in attendance.

While Bobby’s journey of self-discovery and real world horror continue, we occasionally return to Byron’s self-assigned misery.  He holes himself up in a hotel room, drinking and trying to get out of his obligation to attend the film’s premiere.  Sammy comes by to berate his actor for his retirement, and Byron’s outgoing serenity contrasts with Sammy’s intoxication and dread for the future.  But Byron is drunk too, and both of them pass out side by side on the bed, equally miserable.

Based on everything we know, Byron and Sammy are nice people.  Sure they each might have a bit of an ego, but that’s more of a product of their industry than anything on the inside.  Byron is tired of “play acting,” implying that he wants to do something more honest, and Sammy is depressed by Byron’s rejection of his next script because he genuinely seems to believe it’s something special.  They have aspirations, but the industry has gotten them down.  In other words, their misery started from the outside and worked its way in.

Bobby’s misery, on the other hand, starts from deep within and then works its way out.  Like a stable oil rig that finally bursts, Bobby’s darkness bubbles to the top.  Well, it bursts rather than bubbles.  Bobby is the portrait of a good, hard working kid, and his evil is important to the story as a symbol of the youthful takeover of the world more than as a plot point.  He and Byron do not know each other, and their confrontation at the end is more about coincidence than the resolution of any conflict between them.  In fact, Bobby doesn’t matter to Byron.  He’s just another young kid who’s threatening the way the world works, and that’s what Byron has been afraid of.  The confrontation itself isn’t all that climactic.  Bobby tries to shoot Byron, misses, and then Byron slaps him like a father scolding a child with outdated parenting techniques.  Bobby then cowers in the corner, crying.  When Sammy runs to Byron’s side, the elderly man softly asks, “is this what I was afraid of?”

Maybe it’s simply the fact that Bobby’s shot missed Byron that he realizes he isn’t so close to death as he once thought.  It shows that his internal exile was the product of years in an industry hollowing him out from the inside.  In that moment, though, it becomes clear that there is enough humanity left for him to overcome the hole that he had let occupy him.  To put it another way, there is enough of himself left to survive, and he’s not the ghost he pretended to be.

So if Bobby represents a fear of the youthful takeover (Byron at one point observes a newspaper articled titled “youth kills 6 in supermarket”), what does Bobby’s imprisonment mean?  It’s startlingly quick, although he does inflict serious carnage.  This film came out in 1968, a notoriously violent year (assassinations of Martin Luther King and Robert Kennedy), so maybe the audience, or just Bogdanovich himself, feels desensitize to the gun violence in the news.  The violence in the news clearly influences this story as he focuses on the feeling (fear) created by those news events rather than any sort of realistic depiction of such violence.  In the end the gunman is subdued and made out to be a crying kid.  So I take it to reflect a perspective of the violence of the 60s as temporary.  Bogdanovich might be trying to say that behind every gun is a confused, fearful not even angry person, just a person.  Or, because of Bobby’s ability to look like just another regular kid, maybe Bogdanovich is saying that violence is senseless and unpredictable.  Bobby, the clear villain, isn’t anything like a monster, the type that Boris Karloff has played multiple times in his career.  Instead he’s one of us, showing that the real threat is something within our culture already.  The danger is a product of the world we have created, not something that comes from outside our borders.

This film is very quiet and very dramatic.  A shot that looks through the scope of a rifle is inherently dramatic because we are shown the potential victim, yet we can’t tell them to watch their back.  We see the damage from Bobby’s perspective, and not only does it put us on the edge of our seat with dread, but it places us in his world.  We see the violence as if we’re behind it.

I also can’t remember how many lines of dialogue Bobby has, but it’s certainly not much.  He’s very quiet, and this makes him feel like a blank slate.  Even his appearance (white clothing, neat blond hair) feels like it has no definable qualities.  He’s just a guy, and we’re meant to see him as being anyone and everyone.  He’s an archetype more than a character, meaning his actions can be applied on a broader level.  He represents the whole just as much as the whole represents him.

This film does a great job of creating the feeling of dread.  Now every time i see a white Ford Mustang convertible, I’m going to think of this film.  It’s just like how every time I see a white Ford Bronco I think of OJ Simpson.  Spielberg produced a similar effect with the red convertible in Duel.  Looking it up right now, I see that the Ford Mustang was brand new in the 60s, with the first version released in 1965.  So the car itself is iconographic of this time.  It’s new to the world just like Bobby is new to the world.  He is young, and the car is young.

Now that I think about it, this film feels like it was filmed in two different styles, one for Byron’s story and one for Bobby’s story.  When we see Bobby in his car, he’s driving, and the camera is in the car with him.  It feels natural, and it’s clear that he’s really on the road (rather than in a studio).  In Byron’s car scenes, he is seated in the back with his assistant, Jenny.  They are in a much older car, something out of the 30s or 40s, and it appears as though his scenes were filmed inside a studio.  Apparently Boris Karloff was very ill at the time the film was made, so it makes more sense that his scenes would be filmed in a more controllable environment like a studio.  Further separation is drawn between the two characters as Byron is hardly ever alone, and Bobby is almost exclusively alone.  Even when he’s with other people, Bobby stays within himself.  As his family watches a late night variety show, he sits quietly, barely participating in his own life.  Then he takes control with devastating consequences.  Similarly, it’s not until Byron takes control of his own life that he puts a stop to Bobby’s violence nonsense.