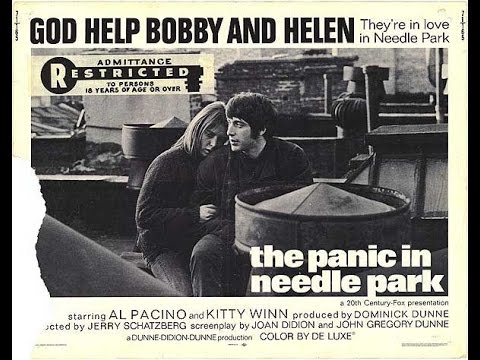 Bobby’s (Al Pacino) and Helen’s (Kity Winn) life is not pretty, and yet there’s something in me that really wanted to buy in to the fragile life they tried to make together.  I found Helen to be adorable and Bobby to be incredibly charismatic.  This film is about devastating drugs, but to call their lives drug-fueled doesn’t feel quite right.  When I think of “drug-fueled” in movies, I think of The Wolf of Wall Street or any other number of energetic, crazy stories usually involving cocaine.  But in The Panic in Needle Park, once we first see Bobby inject himself with heroin, neither character ever really feels alive.  What this film does incredibly well is show the consequences of drug addiction.  Bobby is funny, talks fast and is incredibly confident.  All of his charisma that he builds up in the first fifteen minutes of the film, as he courts Helen, is thrown out the window once he we see how far down the rabbit hole of drug use he is.

Bobby’s heart seems as though it beats 200 times a minute.  He walks with short, quick steps, has something to say about everything, and he’s always motoring through another stick of gum.  He can’t settle down, and he feels like he has a plan to conquer the world.  Then he shoots heroin, and he basically becomes a corpse.

Helen, is sweet and shy.  When Bobby first meets her, she’s sick, and he takes care of her.  Soon they go everywhere, and it’s hard not to see Bobby as her protector.  Helen is like a sheep, and Bobby is a friendly wolf.  He knows everyone on the streets, and he knows how the streets work.  Helen needs someone to look after her after her last sort of boyfriend, an artist, bails.  Helen tells Bobby one morning that she hates to wake up alone.

Helen is in such dire need of someone to watch over her, that she doesn’t bat an eye at Bobby’s intense drug use.  She babies him while he falls into the lulls of a dose of heroin.  She’s like a sponsor, but the worst sponsor of all time.  No, scratch that, she’s like a cheerleader.

One night Helen finally (and inevitably) tries heroin for herself.  She has seen it shot up so many times as if she was a junkie apprentice, so now she knows exactly how it works.  Next thing we know, Helen is in deep.  Her addiction doesn’t get any better, as you imagine.  At one point Bobby is arrested for burglary (alongside his burglar brother), and when he gets out he learns that Helen has started prostituting herself for drug money.

This makes him furious, but it’s not long before Helen’s prostitution becomes a staple of their lives.  In one scene she sleeps with a young man, and Bobby shows up, yelling at the frightened boy, asking if he knew Helen was his wife.  The kid is scared out of his mind, and Bobby empties his wallet before pushing him out of the room.  He starts laughing, and the two junkies embrace each other and start laughing.  Helen remarks that they haven’t laughed like that in a long time.

So I suppose the most striking thing about drug use, as it’s presented in this movie, is the sudden normalization of extreme behavior.  Everything becomes more palatable when the end goal is heroin.  People will do anything and they’ll feel nothing until they get their intended high.

Helen had told Bobby that she’d love to one day live in the country.  For a moment it seems like this might come true.  They take the ferry out of Manhattan, and they buy a puppy.  For once they look like a young, happy couple with their entire lives in front of them.  On the ferry ride back, however, Bobby insists on shooting up and making Helen shoot up as well, reasoning that he doesn’t want their highs to not match up (he doesn’t want to get high as she’s coming down).  Bobby tells her to leave the dog outside, and moments later Helen watches as the dog runs right off the edge and into the swarm of water below.

This begins an extended low point for Helen, though she has already experienced a number of low points.  She considers returning to her ex-boyfriend, but that doesn’t work out, and she tries anything she can to get high, even claiming she has kidney stones to a doctor in an effort to get any kinds of drugs she can.

Later she is arrested and a detective (who previously held her overnight earlier in the film) asks her to give them Bobby who in turn can lead them to his boss, the biggest supplier in town.  Helen resists but ultimately gives him up.

Months later, when Bobby is released, Helen is right there waiting for him as if he never left.  Bobby seems to turn his back on her, but she keeps following albeit at a distance.  Eventually Bobby simply says, “Well?” and Helen catches up to him.  They walk on together, likely to continue on the same vicious cycle downward.

This is a pretty grim film.  It’s never too extreme or violent or tough to stomach in the moment, but the accumulation of moments and highs makes this film hard to handle.  You can feel the characters’ desperations and the lifelessness of their brief attempts at sobriety.  When they’re high or about to be high, their judgment is clouded by their mania.  They think they can do anything, but we know when their mind clears up they will have the will to do nothing.

It’s even more tragic knowing how Bobby has ruined Helen.  Not to say her life was perfect before, but he made an unspoken promise to take care of her, and he has turned her into just another junkie.  Their story begins with him putting a scarf around her to keep her warm, and it ends with him yanking an invisible chain, dragging her along in his wake.

So this story is about Bobby escorting Helen into a world he knows all too well and she doesn’t know at all.  I can’t figure what it is about Helen that attracted Bobby?  He is a somewhat functioning addict in that he can feel things outside of his drug addiction.  He feels enough to pursue Helen, and he knows enough to make a plan to finance his drug habit and stick to that plan (even if it is misguided and dangerous).

On a couple occasions, Bobby tells Helen, “you’re my girl,” as if he owns her.  It feels like Helen is just another thing he thinks he needs in order to build the perfect life.  In some ways he acts and feels like royalty.  Bobby knows no life outside of his part of New York, near needle park.  He knows everyone, and they know and respect him.  He even knows the cops and vice versa.  When the detective arrests Helen early on in the film, he knows she is working for Bobby.

And in an earlier diner scene, Bobby sits down with Helen and then seems to recognize everyone on the street.  This is his world, and Helen is his queen.  He never considers the life he is giving to her.  He just wants her around because he needs “his girl.”  He protects her like the kindest guy in the world and then later tries to beat her as the realities of his drug use become momentarily crystal clear.  His whole life is in service to his drug use, but the highs of his drug use convince him he can and does have it all.  When Helen, with he new puppy, brings up again the idea of moving out of needle park, Bobby won’t hear it.  He doesn’t argue, he just states as fact that needle park is his home.  The idea of moving doesn’t compute to him.

Ultimately it’s Helen who suffers the most throughout the film.  She experiences the real lows of her addiction because she isn’t as prepared for it as Bobby.  She is the one who watches her life completely devolve (whether or not she’s aware of it), and she’s the one who starts prostituting herself to feed her habit.

Bobby, despite his multiple arrests and near overdose, never seems to waver.  He is used to this lifestyle, both highs and lows.  In one scene, Bobby tells Helen that some of the money he has saved will remain untouched except to be used to get a lawyer if he’s arrested.  Bobby prepares for the fallout because he expects it.  Helen does not, so it hits her harder.

In the end, Bobby’s arrest isn’t the end of the world.  He is ready to march on and continue as if nothing changed.  Helen follows him because she has to.  She has been remade in his image, even if he doesn’t consciously know it.  I suppose the death of Helen’s puppy is symbolic.  She tried to care for this pup, only to watch him/her die due to her negligence (with some help from Bobby).  This moment is a representation of her relationship with Bobby.  He is the one with the intention of caring for another, and she is the one being cared for.  In the end, his negligence will be the end of her (and already is).