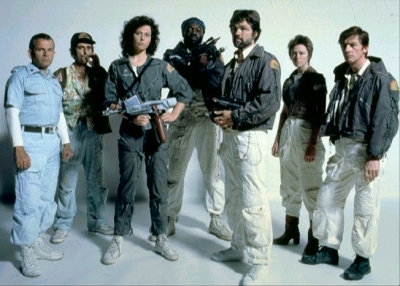 Well, this film scared the hell out of me.  I guess I should’ve remembered that this is a horror film set in space, particularly with the tagline “in space no one can hear you scream,” but somewhere along the way I forgot and thought of this as another thrilling jaunt through space.

What I appreciate most about this movie is how straightforward and simple the story is.  A bunch of astronauts wake up from a long sleep, celebrating their return trip home which should be over pretty soon.  Then they realize that the ship didn’t take them closer to home at all.  Instead it responded to a signal on another planet, and when they investigate, things start to go horribly.

First, I should say that Ridley Scott does a tremendous job of creating a feeling of dread.  He clues you into the horror before it even happens.  This isn’t a film about people reacting to a disaster, it’s a movie about people anticipating that disaster.

When they’re on the strange planet, Ripley (Sigourney Weaver) says that the signal they received wasn’t an SOS like they thought.  Instead it’s a warning (cue shivers down your spine).

The movie is very quiet, starting with the long 2001: A Space Odyssey-esque silent shots moving through the space ship.  Everything is crisp, sleek and cold.  It’s so neat that you know something will spoil all this.  Then again, on the planet, the scene quiets down as the astronauts observe this strange sighting.  There is a dead alien (shiver) and a bunch of eggs.  Again, this is just like a horror film as you hope to god they just get out of there before the inevitable nightmare begins.  One crew member suggests they ditch this joint, but they don’t.  One crew member is jumped by a small alien which latches on his face but doesn’t kill him.

This, again, is truly horrific.  The alien doesn’t just kill the guy, it invades his body and keeps him alive.  The sight of him lying motionless on a table with this silent octopus-like leech on his face isn’t just frightening, it’s creepy and unsettling.  I was both scared about what would/could happen and what had already happened.  The alien has stuck tentacles into the guy’s stomach, and then it later unlatches itself from his face.  The guy feels good again, but at dinner he collapses in pain, and we get the famous scene of the alien emerging from his stomach in birth.  The crew member is the first to die.

The alien has scurried away from the crew, and we’ve established that they can’t simply shoot and kill the alien because it is filled with acid that could destroy the ship from the inside out.  Thus they’re stuck trying to pursue this alien somewhere inside their ship.  Over the course of the movie, everyone dies except for Ripley and one crew member, Ash, turns out to be a robot.  He was programmed to ensure that they picked up this life form and brought it back to be studied.  The lives of the rest of the crew were deemed unimportant in this mission.  Basically, they’re all supposed to die.

The scene in which Ash is killed is particularly frightening.  It wasn’t clear to me that he was a robot when his head is bashed off of his body, revealing cords and tubes and slime underneath.  I thought he had been invaded by some kind of alien pest, and all I wanted to do was throw up.

There is a lot of imagery of body invasion, which is a special brand of horror.  Body invasion or body horror (like Human Centipede or Rosemary’s Baby or that one scene from The Last King of Scotland) has always bothered me, so Alien was particularly unsettling.  The first crew member is infected with this alien parasite before his death, and Ash feels infected even though we learn that he was a robot the entire time.  It creates a feeling of nothing being safe or what it seems.  Underneath the surface is only chaos.

The space ship is ultimately blown up as Ripley escapes, showing another example of body horror (or space ship horror), and then just as Ripley thinks she’s safe, she finds the alien once more hiding in her escape pod.  Everything is infected.

This movie is incredibly tense and simply scary.  In one scene, a guy has to crawl through the dark ventilation system, looking for the alien so he can burn him alive with a flamethrower.  In another great moment of suspense, the other crew watches his whereabouts on a monitor, also tracking the location of the alien.  The alien seems to approach him, but then it disappears.  Suddenly the blinking dot appears again and heads straight for the guy.  Similar to the limitations that forced Steven Spielberg not to show the malfunctioning shark in Jaws, this means of storytelling is much more dramatic than if we just saw the alien hurrying towards the guy we don’t want to die.

Oftentimes it’s better not to show the scary thing because what we imagine the scary thing to be is much scarier than what it actually looks like.  After that guy is killed, we still only see the alien for a split second before we cut away.  Thematically it also makes sense not to show the alien, because part of the terror is not knowing where the alien is or what it really looks like.  Most of the film, in fact, is a bunch of people wandering slowly and with dreadful anticipation.

Every horror-ish movie tries to accomplish this effect.  Jaws opened with a deadly shark attack so that from that point on, we understood the power and danger the shark represented, even if the characters didn’t.  In Jurassic Park we received a similar cold open with a veliciraptor killing a man so that from then on we knew the dinosaurs were dangerous.  You have to establish the danger or at least imply it, and then you don’t really have to show it again for a while, so long as the threat remains.  That’s what’s so amazing about horror films and why they can be made so cheaply.  You only really need a few scenes of actual damage, and the rest is foreboding silence.  With Alien, you tell the studio you want to make this alien movie, and you say you only really need an alien puppet for a total of, say 7 minutes in the movie (complete guess).  The rest of the time we’re fearful because it feels like the alien could show up at any minute, even if in the scriptwriting process, they’re planning it out so the alien shows up every 15 minutes and even then maybe only for a few seconds.

So yeah, great movie, terrifying movie, and well-made and lean.  Everything felt essential, and everything either served the character and/or the horror.  There were no wasted subplots, and the general withholding of information pertaining to the crews’ family lives made the film more tense.  Since we never saw the crew on earth before or after the plot, they felt even more isolated, and that’s the feeling the movie wanted.  The story is more haunting at the end, despite Ridley’s survival, because she’s alone.  We don’t know that she’s going home to meet anyone or that anyone cares.  To us, the entire world has been destroyed (in the form of the 6 other crew members) and now she has nothing.