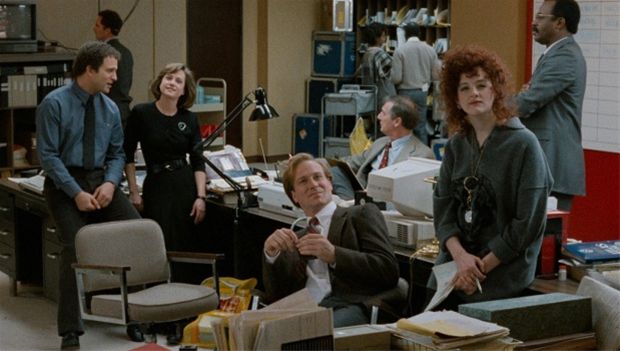 Broadcast News is a romantic comedy about a producer, her reporter friend and the new hotshot reporter who knows nothing about the news.  Jane Craig (Holly Hunter), is a news producer who thrives for authenticity and never seems to sleep.  She works most closely with her friend Aaron Altman (Albert Brooks), a dedicated reporter who often feels victimized by the his childhood bullies who are now disguised as adults.  One of these ‘bullies,’ isn’t really a bully, but he represents the same group of people who tortured Aaron as a child.  This is Tom Grunick (William Hurt), a new reporter who’s only skills seem to be his charm and good looks.  Whereas Jane and Aaron operate outside of the spotlight (hoping for a pat on the back from the network’s news anchor played by Jack Nicholson), Tom can only exist in the spotlight.  He was a sports reporter who was thrown into a local news anchor chair and then given a reporter assignment alongside Aaron and Jane.

We establish right away Jane’s attraction to Tom, but it is temporarily undermined by their different professional approaches and background.  Tom knows that he knows nothing about the news, and Jane rips into him one night (after feeling sexually spurned), saying he should do something to get up to speed rather than just complain about his lack of knowledge.

Tom is always presented as a pretty good guy whose only faults are that people give him things.  He seems genuine about learning the way the newsroom works, but his devotion to the job differs from Jane’s and Aaron’s devotion in that he probably knows this is only a stepping stone to the next job.  Ultimately, after a heavy round of layoffs, Tom tells Jane that he’s not broken up about the firings because he’s been in plenty of newsrooms that suffered similar fates.  To Tom this is all temporary, so he gathers what information he can and uses it to boost his own career.

When Jane tells Aaron that she is falling in love with Tom, he tells her that Tom is the devil.  Though he is acting from a place of fear and insecurity, Aaron’s point is that Jane values her career almost above all else, and Tom’s approach to their shared line of work completely contradicts hers.  Tom is uninformed, and try as he might, he will always be a step behind.  There are countless moments in which we see how little Tom knows, and it’s daunting to imagine the reading and studying he will need to catch up.  All the pieces are set up at the beginning of the story for us to imagine Tom ascending through the ranks and sitting in the anchor’s chair (which he ultimately does).  We know he will one day be in a position of power, so observing his limited knowledge is frightening.  There is a responsibility by the news (embodied within Jane and Aaron who will go to great lengths for their story) to be educated and balanced.  Tom is a pretty face and nothing more.  Though he demonstrates the right acting chops for the anchor chair, he is almost an empty vessel through which anything can pass unfiltered, and that’s dangerous.

So Aaron points out a flaw in Tom’s plan, one that won’t hurt him professionally in the slightest but that will drive a wrench between Tom and Jane.  Earlier in the movie, Tom conducts his first solo report, a story on date rape.  It’s a well-done piece, and everyone in the office is impressed and enraptured by his story as they watch (except for Aaron who doesn’t want to like the piece).  There is a shot in which we see Tom with tears in his eyes as a date rape victim tells him her personal story.  Everyone compliments this added touch, but it’s Aaron who realizes that this moment was staged (there was only one camera, meaning the choice to shoot Tom was deliberate).  By this time we’ve already established how Jane refuses to stage anything, even if it is just a simple shot of a man putting on his boot (which he does anyway).

So when Jane learns about this moment, it might as well be her learning that Tom murdered someone.  This part of the story coincides with the series of layoffs at the network.  Jane gets a promotion, however, and Tom also gets a promotion but is sent to London.  As Aaron remarks, this is a huge promotion which all but signals that Tom will one day sit in the anchor’s chair.  Aaron, meanwhile, quits his post and takes another job across the country in Portland, Oregon.

Aaron’s decision to quit appears to be just as influenced by Jane’s rejection of him (he confesses his love, kind of, for her) as it is by anything to do with the network.  Though, to be fair, the network chose Tom over him, so Aaron recognizes that he can only go so far here.

The movie began with a couple scenes showing Tom and Jane as children, demonstrating qualities that would later tie into their adult personas and enable them to better do their jobs.  The movie ends a few years after the characters all part ways.  Tom is now set to inherit the coveted anchor position, Aaron is married and has a son, and Jane accepts a position to Executive Produce Tom’s program.  It’s a sweet ending in which the characters all come together and are willing to laugh about their conflicts (which occasionally became very heated and personal) rather than to dwell on them.

This film feels messy in a lot of ways, but no one is every a hero or a villain.  Tom is the closet thing to a villain, but he shows a remarkable willingness to admit what he doesn’t know and an eagerness to learn.  He wants to work with Jane because he knows how valuable she is, and he eventually gets her to work alongside him.  Someone like Tom in the anchor chair is much more palatable and enticing with someone like Jane in his ear at all times.

Aaron is in many ways the de facto hero of the story, at least on the surface.  He is a little schlubby where Tom is tall and handsome.  When Tom is given something, Aaron has something taken away.  We are likely to identify with him because he looks more like your average, hardworking person than Tom, and he doesn’t get many breaks.  We’re meant to want to see him succeed, yet he’s also kind of an asshole.  When he feels cornered, he begins lashing out like a feral cat, and he’s occasionally hard to love.

This aggression towards Jane helps us feel more sympathy for her because we understand her attraction to Tom and might even support it, even if we know the quality of her relationship with Tom is pretty much inversely related to the one she shares with Aaron.  So the film doesn’t give us a clear person to root for.

What I liked so much about the ending was that with a kid in hand, I could feel the sense of healthy detachment Aaron experienced from the events of this story.  I know that many things feel incredibly vivid and painful in the moment, but years later you can often look back and admire how messy it all felt.  And when you have a kid, I imagine a lot of the perceived severity of old relationships feels a little toned down.

There are certainly stakes in this movie, and several times it feels like Aaron’s and Jane’s long-tenured friendship might flame out, but in the end it’s not really that big of a deal.  These are just stubborn people who rather fight for their vision than take a back seat.  And we need those people.  It’s better to fight ideologically in this way than to submit to a higher authority you don’t agree with.  This story suggests that it’s okay to ruffle some feathers if you’re defending something you believe in and ultimately you won’t feel worse off, even if you don’t win.