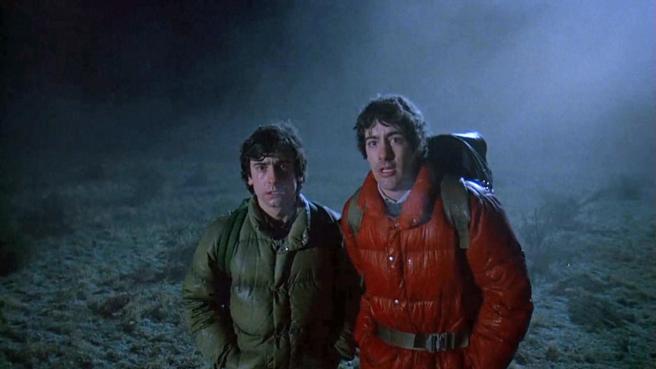 An American Werewolf in London is one of those silly, colorful 1980s films that you think will just be kind of fun and entertaining but is actually quite scary.  It’s directed by John Landis who also directed Animal House, The Blues Brothers, Spies Like Us, Coming to America and Trading Places.  He directs comedies, and there is plenty of comedy in this film, but Landis demonstrates an impeccable timing with his comedy that translates equally as well to horror.

Comedy and horror aren’t all that different, I’d say.  They both involve, typically, a stretch of the imagination and depend on crucial performances, mise en scene and, most importantly, timing.

Near the end of the film, as the werewolf stalks London at night, a man finds himself alone in a subway station.  The werewolf’s howls are heard in the distance, and a chase ensues before the man is killed.  In the scene, we hear the werewolf, but we don’t see him, even after the man has seen the wolf and hurried away.  Instead we see the camera occasionally reflect the wolf’s perspective, and we see the man’s terrified expressions.  When he falls on an escalator, the camera cuts to a shot at the top of the escalator as the wolf very slowly enters frame, far from the camera.  It’s an oddly quiet scene for a grissly murder, but it’s silence is effective because up until this point, all the wolf attacks have been loud and sudden, with close ups of the wolf’s face in split-second shots that both frighten you and hide the totality of the wolf (since it’s really nothing more than a puppet).

So in this subway scene, the movie reacts against itself, playing on your expectation as a viewer.  The wolf doesn’t leap out.  Instead it holds back, and this creates a feeling of dread as you already know what’s about to happen.

So there is plenty of violence and horror in this film, but it is also a bit of a comedy.  The story opens with David (David Naughton) and Jack (Griffin Dunne), two American post-grads, backpacking through Europe.  We meet them in a small, rural English town where they are attacked by a werewolf which kills Jack and injures David.

David doesn’t completely remember the attack when he wakes up in  London hospital 3 weeks later, but the events start coming back to him, even though it is in opposition to the story told by the witnesses.  They claimed the attacker was simply a lunatic, the man who we know had transformed into the werewolf and then changed right back into a human once he was killed mid-attack.

David begins to fall for his nurse, Alex (Jenny Agutter), and is then visited by his now undead pal, Jack, who bears the gruesome marks of his slaying.  Jack tells David that he is now a werewolf, and the werewolf’s bloodline needs to end, with Jack himself.  David cheerfully tells Jack that being undead (and talking to corpses) is horribly boring, and he can’t ever rest until David kills himself.

David denies this at first, and he is discharged from the hospital and goes to stay with Alex, as their relationship blossoms.  Jack returns, however, even more decayed than last time, and he reminds David of his duty to commit suicide.  David considers that he might be going crazy, and in the second half of the film he deals with his inevitable transformation into a werewolf during the next full moon.

Meanwhile his doctor visits the small English town where the original attack took place, and he figures out that David is a werewolf.

I won’t go too much into the details, but chaos ensues, and it’s brilliant, fun and terrifying, like a combination between the campiness of Gremlins and the terror of a modern zombie film, something like 28 Days Later.

Along the way, some of the real scares come from David’s won nightmares, in which he and the people he loves are haunted and hunted by men in gorillas masks.  The movie keeps you on your toes, taking delight in making you laugh and making you scream.

This film reminded me a lot of Gremlins, Jaws, George A. Romero movies and Back to the Future, but I think that last one is really only because of the colorful Marty McFly-like vests that David and Jack wear when we first meet them.  This whole film, as I’ve said, is so campy and fun, that it creates an almost bipolar-esque tonal perspective.  On one hand, everything is funny or shown with a winking nod, such as when Jack’s undead body first appears, and the deep gashes in his face and torso don’t vibe with his happy-go-lucky attitude.  On the other hand, the werewolf itself and David’s own nightmares (as well as transformation into the wolf) are truly unsettling, like something out of a John Carpenter movie, I suppose.

These scary moments are scary because they hit you on multiple levels.  It’s almost like they’re most scary because so much of the rest of the film is fun and playful.  The first half of the film, in spite of Jack’s death scene, feels like a comedy.  It’s a horror-comedy, with the latter emphasize and the former only in service of the comedy.  But the second half of the movie hits you in the jaw.  It’s like you’re in a pillow fight with a friend, and suddenly they pull a knife on you.

The terror works by jumping out at you, like David’s nightmare in which gorilla-masked men assassinate his family and hold a knife to his throat, making him watch, before they ultimately slit his throat.  It’s incredibly gruesome and the type of scary that shouts at you.  Then David wakes up, but he’s still not awake as another gorilla man jumps out of the window and stabs nurse Alex to death.  When David wakes up after this, you’re not sure that he’s even awake, and that keeps you leaning forward.  This does a great job of putting you in his headspace as he’s not even sure of the authenticity of the danger or when it will strike.

Then you have the dread I mentioned previously, in the subway scene, after we’ve already seen the explosive terror.  Add to that the increasingly hard to bear decomposition of Jack’s undead body as he reappears to David, ultimately looking like little more than a rotten skeleton.  These moments of happy-go-lucky meets zombie are unsettling because it, I suppose, creates this idea of death as only temporary, with the real horror soon to follow.  Actually, that might not even be it.  David will meet other undead characters with similarly jovial personalities as Jack’s, all in various states of gore and decay.  They plead for David to kill himself so they can go to rest.  Their happiness is in complete opposition to how they should feel if they’re effectively dead but able to see the world around them.

Jack, for instance, says early in the film that he loves a particular girl they both knew from school.  After his death, he tells David that she came to his funeral, but that she was so distraught over Jack’s death that she went home with another guy.  Jack laughs it off as more of his familiar bad luck, but that’s awful, to see a loved one go into the arms of another when there’s nothing you can do to stop it.  I’m imagining that Jack still has the same desires, fears and grudges of a living person because he does express desire over the girl.  So I don’t completely know what kind of feeling this creates.

These are powerless characters who are stuck in purgatory, and even if you argue that, once dead/undead they are stripped of human burdens like desire, fear, etc. well then that’s just as horrifying, I think, because it suggests that everything we feel is a lie, just chemicals and brain composition that tells us how to feel.

This all somehow undermines our entire life, exposing it as one big game of charades.  Perhaps what I’m getting at is that the undead characters, stuck between living and dying, never once consider tying to come back to life.  There is no question to them that they’re dead, and all they want is to really die.  Would there not be some question as to the possibility of returning to life?  Now I’m overthinking it.

I just find a lot of this kind of tongue-in-cheek horror more unsettling than horror that takes itself so seriously.  This is like the gallows humor of someone who works closely with death and can only joke about it because they’re so disenchanted with the idea of an afterlife.  To put it one more way, if Jack were to die in pain and torment, and the movie played some somber music on his way out, then it would suggest that he’s going through something real, that he’s really transitioning into another state of existence or lack of existence.  But this movie shows you that he dies and… he’s still just right there.  Death, in this film, is just as irreversible as in other films, but there is no celebration or mourning of the dead.  They’re just pests, to David, and variations of themselves, stripped of undamaged skin and the ability to feel hunger.

Again, I’m overthinking this.  An American Werewolf in London is playful and violent.  It felt like a movie that would be a lot of fun to make and work on, and it delighted in playing with the audience, making you feel all kinds of things.  It’s the opposite of Batman V. Superman in that way, I suppose.  American Werewolf pushes and pulls you, shoves you down and helps you back up.  In a lot of ways, it’s what the default movie should be.  It’s not trying to be a prestige picture or to mock or satirize any kind of political or social constructions.  Instead it’s just here to entertain and make you feel like your money was well spent.