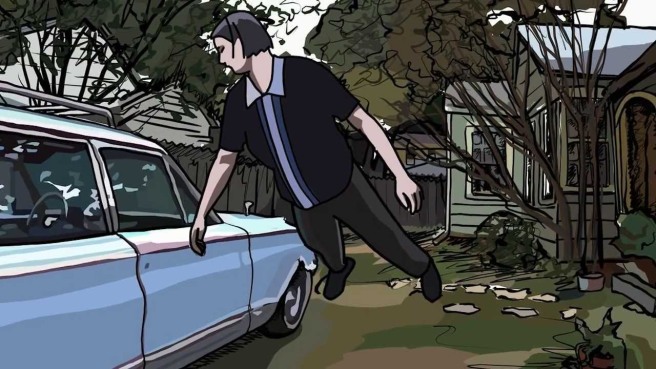 Waking Life is all a dream, but it’s not a dream like Inception is a dream.  The point is never really to determine whether or not you’re awake or dreaming.  The point is to just go with it.

The protagonist is an unnamed character, a young man played by Wiley Wiggins who you may recognize as one of the freshmen from Dazed and Confused.  There isn’t much to say about him or the plot other than he goes from place to place, never really focused on how he gets there, and interacts with people who all have some kind of philosophy on life.  Most of the time Wiley is there to listen, but other times it’s just two characters talking who have nothing to do with Wiley.

They talk about life, death, determinism, existentialism, art, collective conscious and dreams themselves.  In one conversation, once Wiley realizes that he is in fact dreaming, he finally speaks himself.  In talking to a woman who asks him to be a part of a performance art show she’s putting on, Wiley asks her what it’s like to be nothing more than a character in his dream.

She asks him more questions, and Wiley begins to answer.  He says his silence within the conversations we’ve seen in the film suggest he is passive, but she tells him that silence doesn’t necessarily mean passivity.  Humans communicate in all kinds of ways, and words are only one of them.

None of the conversations or theories in this film claim to be definite or even correct.  Instead they mean more in the effort they convey by people to understand the world around them.  These characters feel very animated and wacky, suggesting that we’re meant to appreciate them more than their ideas.  This feeling is created mostly, I’d wager, due to the animation style of this film.  Every scene was filmed with live actors and then animated over, frame by frame, to give this surreal, dreamlike quality to the film in which nothing ever stays still.  It’s like you’re looking at the world through water. The people seem to flicker and the background moves as if simultaneously sinking and rising.

It creates a sensation that everything is alive as well as making it clear that we’re only in a vaguely recognizable world, like the settings in your dream, in which there is enough stimuli to make you know where you are, but it’s just a little off.

Linklater’s films all seem to be about something collective, whether it’s the collective unconscious or merely just experiences we’ve all had.  He’s made films about a group of people (Dazed and Confused, SubUrbia, Everybody Wants Some!!) and films about individuals (Slacker, Before Sunrise/Sunset/Midnight, Boyhood), and this all suggests to me a line drawn between the individual and the group.  Every group, on some level, seems like it becomes its own individual, defined partially but not wholly by each individual in the group, just like you are defined by a variety of characteristics, decisions and actions.

So Waking Life really focuses on this idea by showing a bunch of different people with very specific beliefs about life but then making it so that these are all aspects of the protagonist’s mind.  This is his dream, after all, and at a certain point he realizes that this is his dream and that these people are all buried deep within his mind.  As Wiley tells one girl, he doesn’t know where these ideas come from that people tell him, but he reasons that he must’ve had some knowledge of them somewhere within himself.

There are a lot of theories to discuss that are presented within this film, but there are too many to count.  Many of them got me thinking, but then we’d move onto the next person and their theory and suddenly I was off thinking about that way of life.  So I really don’t think this is about what life is or what it might be, it’s instead about the ways life can be interpreted and the people who choose to do the interpreting.

The common theme, I suppose, between all these characters and Wiley himself, is that they’re trying to figure it out.  In one conversation, a man describes the importance of a life observed.  Does that make a life well lived?  As Wiley was told, his silence doesn’t make him passive.  Through all these conversations we are given Wiley’s reaction shots to show just how engaged he is in what’s being said, no matter how odd or far out it is.

Someone, in a film being shown in an empty theater, talks about how film differs from other art forms, like a book.  In film you’re recreating reality because you’re showing not just a person at a bar but rather a specific person at a specific bar.  In another moment, a guy tells Wiley about lucid dreaming and the tricks to determine whether or not you’re dreaming.

At the end of the film, Richard Linklater himself plays a guy at a pinball machine who tells Wiley about the idea of timelessness.  He says that Philip K. Dick once wrote a story that he said he didn’t write so much as channelled some higher power.  Or maybe it was a Philip K. Dick story about someone who wrote such a story, I forget exactly.  But someone writes this story and then meets a girl with the same name as the girl in the story, and she’s dating a guy with the same name as the boyfriend in the story, and on and on, the point being that this actually happened.  The guy sees a priest or something who tells him that this is a biblical story from the year 50 AD.  The point of all this is that when Philip K. Dick or whoever writes this story, he is really puncturing through the misconception of time and accessing another story from 50 AD.  Time is a construct, then, a lie of sorts.  In reality, everything is happening right now.  Maybe it’s not 50 AD.  It doesn’t matter when it is because it’s now.

This feels very much like the end of Boyhood, in which Mason, a little stoned, says life is just a series of moments and it’s always right now.  This conversation also feels very similar to the one that started Slacker, Linklater’s first film.  In that story, Linklater plays a character who gets off a bus and starts talking to a cab driver about how when you make a choice, there is an alternate reality created in which you made a different choice and how every time you decide something, you’re splintering life so it goes multiple directions.

A lot of the conversations in Waking Life feel as convoluted but also somewhat pure as that one.  These are conversations with people who are either highly engaged with life or the furthest thing from it.  Are you supposed to just live or are you supposed to think about what living means?  What does it mean to engage with the world or people?  What’s even real?

This is all stuff explored in this film and like most Linklater films, there doesn’t seem to be a definite answer because how could anyone know?  The important thing is that we are all constantly exploring this, I’d say whether we know it or not.

The person who goes to work every day and gets mad at a friend or falls in love with a girl down the street is living.  The person who thinks about what it means to get mad and to fall in love is also living.  Linklater seems to fall into the category of people who reflect and take time to observe life, but he never shames the people who don’t.  Instead he celebrates them, almost as if he recognizes that the simple difference between how they approach life is life itself.