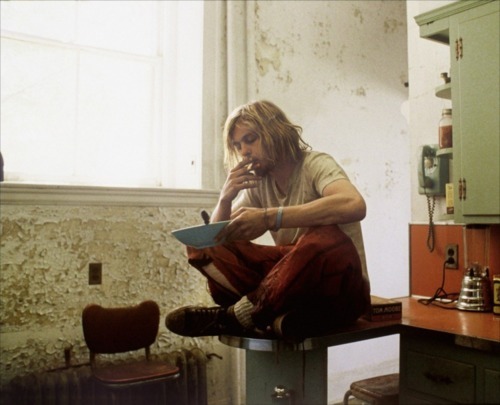 Last Days is a slightly fictional account of Kurt Cobain’s final days before his suicide in 1994.  It follows Blake (Michael Pitt), a guy who might as well be Kurt Cobain, based on his similarly long blond hair, female sunglasses and the setting of the film.  But other than that, the events of the story are complete fiction.  Van Sant takes what we know about Cobain and his death (the setting, the age, the musical persona) and elaborates on what could have been going on underneath.

In the end, Last Days is much more about the ways we react to someone like Cobain before and after his death, as fans, friends and strangers.  When we meet Blake, he has already lost something severe.  The similarities to Cobain’s death and the title of the film itself make it extremely clear that Blake is going to die in the coming days.  That’s not the point of the film.

But what’s interesting is that just because we know where he ends up, that doesn’t mean we know where he starts.  In any film with a built in ending, the characters can start as anything the director wants.  Take Breaking Bad for example.  Creator Vince Gilligan has said in multiple interviews that the goal of the series was to “take Mr. Chips and turn him into Scarface.”  The point of that series, ultimately, was the complete transformation of Walter White.

In Last Days, Blake is essentially a ghost from the first minute of the film.  This isn’t a film about what led to his demise.  Instead it’s a film about what it means to have lose yourself while you’re still alive and if that means anything at all.

Blake wanders a forrest, his head hung low, grunting all the while.  When he emerges from a small lake at the bottom of a waterfall, we see just how bony he is.  He’s not Christian Bale in The Machinist thin, but he’s wasting away all the same.  Blake likes to wander, but it’s not clear if he’s going towards or away from something.  He ends up at a large, almost rundown mansion in which he lives with a few friends with whom he hardly interacts.  They know he’s around, but they don’t seem concerned with talking to him.  If Blake wants to talk, they reason, then he’ll talk.  At first this feels like the compassion of understanding friends who know what Blake really needs (some quiet rest away from the world), but eventually it feels like they just don’t want to get involved.  That’s because they do talk to Blake eventually, but only when they need something.  One of them is broke, he explains, and needs money from Blake to get to Utah.  Another one wants help with a song he’s working on (which sounds horribly shitty from his description).  The man takes too long to explain the story behind the song: He met an attractive girl on tour, slept with her, and then didn’t call her back when she came through town.  His song is his way of apologizing, but it all comes off as a lame excuse to make up a song that doesn’t mean anything at all.

In contrast, we only see Blake play music two times, and each time it feels powerful and organic, made all the more impactful because Blake is a guy who hardly speaks throughout the film.  He can only express himself through his music, the same medium which his musical friend exploits to apologize to a girl he doesn’t really know.

In these two musical scenes, one right after the friend asks him for musical advice, Blake emerges from his shell just for a moment before retreating right back into it.  In the first scene, the camera lingers outside the window into the living room of the stone mansion.  It slowly pulls back over the course of a few minutes as Blake constructs loops on different guitars, plays the drums and then screams into the microphone.  The music isn’t chaotic, though.  It has a nice rhythm and energy, and when Blake screams into the microphone, it feels like the entire house is screaming.  Then he stops playing rather abruptly, and the scene ends.  In the other scene, the camera sits inside the same room with Blake.  His head hangs low over his guitar, his hair completely hiding his face, and he plays a beautiful song in which the only part of the song he doesn’t mumble is something about this ‘long, lonely journey from death to birth.’

Other than that, Blake mumbles and stumbles.  He hides behind his sunglasses and a parka, even though it is presumably spring outside, and he runs away from people when he spots them.  He’s either a ghost or a hermit or both.  Despite Blake’s foggy frame of mind, we never see him do any drugs or drink any alcohol.  He just is the way he is, and it’s up to us to imagine how he got there.

Blake’s self-expression over these final few days is all about how he dresses.  In one scene, a man comes over trying to sell Blake another ad in the yellow pages (he confuses him for someone with some sort of auto shop), and Blake slumps in his chair, fighting to stay awake, while he wears large boots, a black dress and an overcoat.  He experiences no shame about his appearance, because he is submerged so far below that where the only things he can feel are hunger and fatigue.  When he fights to stay awake, he might as well be fighting to stay alive.

Blake’s death is offscreen.  A gardener sees his body through the window, and then we linger on the group of friends crashing at his house as they decide what to do.  Their plan is simply to leave, a form of self-preservation.  As they drive away, one of them simply plays around on the guitar, either lost in thought or completely unfazed by what just happened.

As the credits roll, we watch the police try to carry Blake’s body away, and they drop him the first time.  This film could be about any number of things, but when they drop the body it feels so clearly about the way Blake is used up by his friends and his fame.  They simply put up with him when he’s alive (even though they depend on him), and when he dies they just move on, without any care in the world for anyone but themselves.

I think it’s safe to say that this is how the world feels about celebrities in general.  When a celebrity dies, it’s rare that you or anyone else is deeply affected because you never knew that person.  Their deaths serve as morbid entertainment whether we want to think of it that way or not.  Just look at the fascination with murder mysteries, true crime stories, Serial or Making a Murderer.  These are stories about real people in which some of them die, and we consume like we would with Game of Thrones.

It’s important, then, that Blake so closely resemble Kurt Cobain.  This story is about celebrity, and Van Sant plays off our preexisting knowledge of that celebrity in particular.  He doesn’t have to waste time telling us that Blake is a famous musician with millions of fans and who is depressed.  We see the long hair, the guitar, the sunglasses and we know who it is.

A lot of Gus Van Sant’s films feel a little too long and at times boring, but the next day I always find myself thinking about them more than I would many other films.  I have to compare many of his works to Richard Linklater, but that might just be because I love Linklater and have very recently seen several of his films that I had never seen before.  So maybe this is just my own recency bias, but both directors take their time and paint a portrait of these characters.  Linklater likes to do it through conversation, and Van Sant enjoys the silences.  We’re all silent in different ways, I suppose.

In Last Days, the silence is often gently accompanied with various ambience.  In one scene, we see Blake digging in the backyard through an upstairs window.  In the foreground of this shot are two of his friends, still asleep.  Next to them a program plays on tv, and this is all we hear.  In another scene, Blake falls asleep on the hardwood floor, and the sound is of another tv, playing a Boyz II Men song that feels way too heavy-handed and aimed at middle school kids.

In other scenes, the sound is that of nature or just the ambience of the room.  I can’t remember all the details, but nothing was ever truly silent even though you would classify it as silent.  I took this all to demonstrate a form of Blake’s own expression, again whether he knows it or not.  In the absence of his own ability to talk through what he’s feeling, there are sounds and noises and other people and television programs that might  do it for him.

And in the end we learn the most about Blake through the company he keeps, even as he tries to avoid them.  In his silence, too, we make assumptions about him based on this company and again based on what we know about Kurt Cobain.  This leads to us forming our own opinions that are hardly based on the real person.

So I suppose that in Gus Van Sant’s effort to understand and empathize with this character, he showed that we can never understand him and maybe we should stop trying.  The point of the film is that his friends (aka us) consumed Blake like they would consume anything else, be it entertainment, food, money, etc.

There is so little to see in Blake since he is so covered up behind his own hair and layers of clothing, that all we end up seeing is what we want to see, and thus it’s a reflection of ourselves.