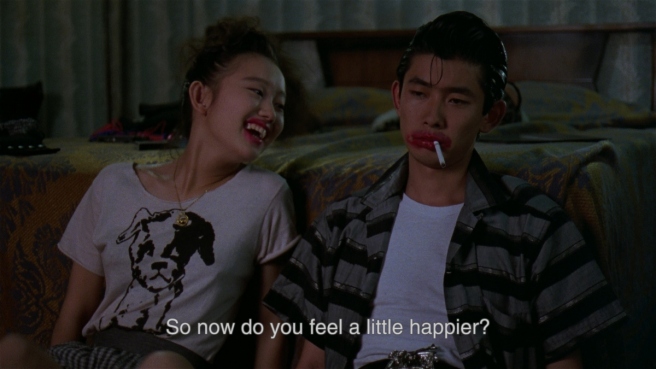 Jim Jarmusch likes to find small theaters in everyday life in which we all perform to some degree.  In Down By Law that theater is a prison cell in which three strangers become friends, and in his later films that theater would be a taxi cab (Night on Earth), a public bus (Paterson) and a conversation over coffee and cigarettes (Coffee and Cigarettes).

These are locations that we’re all familiar with where we can be different versions of ourselves.  That might mean we’re more purely ourselves or that we’re playing a role.  These places and moments are little bubbles both submerged in reality and also outside of the real world.  In Mystery Train that location is a small, seedy Memphis containing three stories that take place over the same night.

In the first story, “Far From Yokohama,” a young couple, Jun and Mitsuko, tour Memphis, looking for famous landmarks while lightly arguing about which location to visit first (Graceland or Sun Studios) and who’s the best artist (Carl Perkins or Elvis Presley).  Jun is silent and occasionally brooding.  He looks like a Jarmusch character with his hair slicked back, though this is an attempt to look like old singers that once populated Memphis.  Mitsuko is much more animated.  She loves Memphis, but she probably loves almost anywhere they go.  Jun is the one who stares out windows at night, thinking deeply or just pretending to be introspective.

In “A Ghost,” an Italian woman named Luisa, arrives in Memphis by plane, alongside the coffin containing her deceased husband.  She maintains a certain level of awe about Memphis, similar to Mitsuko, but there is no one with the guarded presence of Jun to protect her.  In a small convenience store, the cashier pushes her to buy an armful of magazines which she doesn’t need, and in a diner a peculiar man tells her a story about the ghost of Elvis before asking for $20 which she gives him, despite letting him know she knows she’s being conned.  Luisa wants to believe the Elvis story this man tells her, and later a woman named Dee Dee will tell her that this is a story that’s been told thousands of times, crushing what little hope Luisa had.

Luisa shares a hotel room with Dee Dee when she decides she doesn’t want to be alone, something we can understand after we’ve seen her be fooled and harassed a couple times.  At night, when Dee Dee has fallen asleep, Luisa sees Elvis’ ghost, but he has left before she can wake Dee Dee.

In “Lost in Space,” Charlie (Steve Buscemi), a barber, is tasked with helping pick up his drunk brother-in-law from a bar where he’s causing a scene.  His brother-in-law is named Johnny but is referred to as Elvis, which he resents.  When they leave the bar, along with another man named Will Robinson, they go to a liquor store where Elvis shoots the man behind the counter.  They flee the scene but end up drunkenly driving around the streets of Memphis with no destination until Charlie insists they hide out somewhere for the night.

They arrive at the hotel we’ve become accustomed to, and because we’ve heard a gunshot in each of the previous stories, we know Elvis’ gun will go off, creating a feeling of suspense.  In the morning Elvis tries to shoot himself before Charlie intervenes, and in the scuffle Charlie is shot in the leg.  They drive away, with Charlie in pain in the back of the truck, off to Arkansas or somewhere far away.

There are varying degrees of plot in each of these stories.  “Lost in Space” has the most story to pour through, with the stakes rising gradually while “Far From Yokohama” mostly deals with the young couple wandering around aimlessly.  They have nowhere to be right now and no reason to be there.  This first story feels more like an exploration of Memphis, history and America from an outsider’s perspective.  These characters want in while the characters in “Lost in Space” want out.  Charlie resents his brother-in-law, who turns out not to be his brother-in-law, Elvis resents his nickname, and even Will Robinson resents the fact that his name has a recognizable pop culture name.

Each story explores some aspect of Elvis Presley the symbol, not the person.  Mitsuko shows Jun her notebook with pictures of Elvis next to famous American icons to show their resemblance (this includes the Statue of Liberty and Madonna).  Luisa sees Elvis’ ghost after believing the peculiar man’s ghost Elvis story, despite claiming not to, because she wanted to believe.  Elvis represents some form of hope for her.  And in the final story, Elvis resents being called Elvis even though his hair is slicked back just like Elvis (and Jun).

The film ends with a shot of the train going one direction, the truck containing Charlie, Elvis and Will going another direction and a cop car going a third direction.  It’s a simple shot but it feels veery layered.  What’s most important, I think, is that Elvis and Will think the cop car is coming after them, but because it’s been hours since the liquor store shooting, it’s more likely that the cops are going after something that happened more recently.  They’re paranoid, and that says more about them than the world they inhabit (even as they run from this world).

The train, like the hotel, is a constant.  It always moves down those tracks because that’s what trains do.  In each story we see the train cross a bridge at night, viewed either from the hotel or the road below.  It’s always there like a seam holding the world together.  When the film ended, I got a sense, like in other Jarmusch films, that life just keeps going.  None of these characters, despite the experiences of the film, will be much different than they were at the start.  Instead they’ll feel the same joys, same pain and make the same mistakes in the future.

Jarmusch’s films feel like magnifying glasses, exposing some of the smaller moments in our lives.  In Mystery Train, there is just as much focus given to Mitsuko’s Elvis notebook or the bell hop swatting a large, decorative fly or Charlie reluctantly giving a haircut to an out of towner after hours or Jun lighting a cigar for a stranger or an awkward Sun Studios tour as there is to actual plot movements.  The details are what stand out the most in a film like this.  You can look for a thematic point, and there probably is one, but my takeaway is that this is what America looks like, though even that feels way too broad.

The Memphis in Mystery Train, like Times Square or Hollywood, feels like a bastardization of the American Dream.  It feels so American because it celebrates fame and idolatry (celebrities) as well as consumerism, and these all feel very, very American. Jun and Elvis both dress like they just picked their outfit out of a fashion magazine.  These aren’t unique choices so much as the influence of a culture so much bigger than themselves.  One of them is an outsider to this culture and the other… well he’s British so I suppose he might be an outsider too.  The culture and imagery of Elvis Presley and old rock and roll from Memphis hangs over them.  Luisa finds significance in the wake of her husband’s death in the image of Elvis, a dead celebrity, and everything Elvis from “Lost in Space” does seem to be an active rebellion against being called Elvis.

Everything these characters do is centered around how they feel about or act in regards to an entertainment and fame-based culture.  And that’s not entirely a bad thing.  These characters could be wandering through religious ruins on the other side of the world and you could tell a similar story.  These are characters in the shadow of a dominant ideology whose behavior is controlled by that ideology, either consciously or unconsciously.

I think, then, that this film is laying out how America’s religion is something much more modern than the conventional idea of religion.  Christianity and other religions were formed so long ago that they were simply handed to us.  To define these characters by a faith-based religion is to suggest that they grew up in such an environment and were made into that image.  But these are characters saturated in a modern ideology that they seem to have adopted themselves.  No one told Jun to dress like Elvis or for Mitsuko to investigate the similarities between Elvis Presley and other famous people and icons.  They define themselves by these qualities which they have themselves chosen.  The same can be said for Luisa’s obsession over the ghost of Elvis and the rebellion against Elvis (and Memphis) by Johnny/Elvis.

So our religion, I’d say, is more about what we use to define what life can be, in some way.  You can be Christian, for example, but define your life more in the context of your favorite celebrity or idol or athlete without realizing it.  Jarmusch might just be saying that our new religion is ever-changing and defined by the people we pay money to see.