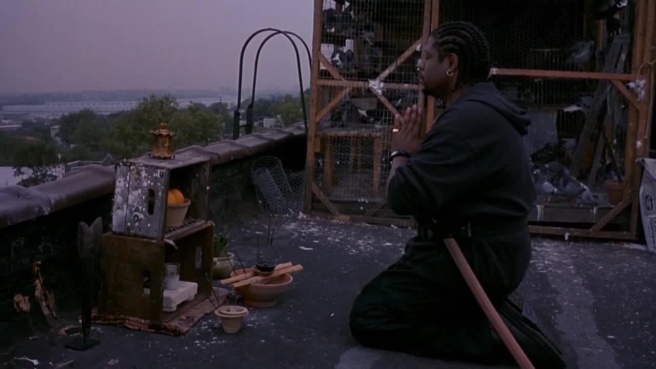 At first glance, Ghost Dog just seems like a silly movie, one you wouldn’t expect to find under Jim Jarmusch’s filmography, but the movie is ultimately perfectly Jarmuch-ian.  It’s a story about self-expression, taken to the extreme, and about tribes and modes of living that aren’t long for this world.  The plot of the film, in it’s conventionality, is secondary in importance to what the story has to say about community, ethics, personal codes and how people of different backgrounds communicate without a shared cultural history or even a shared language.

The entire film is scored by RZA (of Wu-Tang Clan) and hip hop feels thematically connected to the entire story.  In hip hop and rap, there is a focus on speaking through shared references and colloquialisms, almost like you’re making a new, collective language, one that is built from the ground up in a short period of time.  It’s why and how you could have first generation American citizens, from many different cultural backgrounds, understand a lyric in which a rap artist alludes to a popular athlete, because it’s from their (and our) time.  I speak English, but I wasn’t there when the English language was created.  It’s not like I was in a room when someone created the word “maniacal” and I said, ‘sure that sounds great, I’ll start using it.’  This was all built way before me, and that same goes for any language, clearly.

But with hip hop, a casual or intense fan might feel like he or she is there as the language is created.  It’s like crowd-funding a new way of speaking.  And in Ghost Dog, that idea of self-chosen expression is all over the place.  Forrest Whitaker plays Ghost Dog, a mysterious contract killer who identifies as a modern day Samurai either because of or in spite of the fact that samurai don’t exist anymore.  He takes pride in being one of a kind because it means he’s all that more unique.  Ghost Dog abides strictly by his own code, sharing with us verses from a book he reads about the way of the samurai throughout the film.

Ghost Dog works for a man named Louie (John Tormey), an Italian-American mobster more in the vein of The Sopranos than The Godfather.  Louie saved Ghost Dog’s life once upon a time, and ever since then Ghost Dog has devoted his life to paying Louie back, carrying out a dozen or so mob-funded murders.  When Ghost Dog kills one particular man, the mob decides that he needs to die because even though they ordered the killing, they need to make it look like they want revenge.

In one of the better scenes of the film, a few of the mobsters call Louie in to ask him what he knows about Ghost Dog.  When he tells them that the man’s name is Ghost Dog, they react in extreme disbelief before ruminating on the current trend of self-chosen names, like with rappers and Apache Indians.

As Ghost Dog fights back, eventually killing almost all of the mobsters, there is a parallel drawn not only between the end of the “way of the samurai” but also the way of the mafia.  Ghost Dog mows them down with remarkable precision and efficiency, but that’s never a surprise given what we know about him (Ghost Dog is basically a more thoughtful, poetic version of John Wick).  In one scene near the end of the film, a dying mobster tells Louie that there is a silver lining to Ghost Dog’s massacre of them and everyone they know: it makes them go out like “real” gangsters.

Just like Ghost Dog yearns for the days of old, so do the mobsters.  But everything they strive for, so ingrained in their respective “ways,” is something that was built before them, and what neither the mobsters nor Ghost Dog seem to acknowledge consciously is that they are busy creating their own language.

To return to hip hop, it’s a genre that mixes and matches, taking samples from other pieces of music of all genres and combining with a new beat or new lyrics to create something new.  Ghost Dog feels like a hip hop song.  He’s a collection of traits and cultures.  Ghost Dog is black, the way of life he lives by is grounded in Japanese lore, and he works for almost stereotypically Italian mobsters.  Ghost Dog’s best friend, to take it a step further, is a Frenchman who speaks no English.

In one scene, the Frenchman and Ghost Dog stand on a rooftop where they can see an Italian man building a beautiful boat on his own roof.  They both wonder aloud how this man plans on getting the boat off the roof.  First Ghost Dog’s friend poses the question, in French of course, and then Ghost Dog himself asks the same question, unaware that it has already been asked.  In several moments between the two friends, they are unable to  hold a conversation because of the language barrier, but they demonstrate a duality of thought, often wondering the same things and coming to the same conclusions.  Language goes beyond words, but they just don’t know it yet.

So the film shows the end of a couple ways of life which were ending before the film started.  At the same time, though, the story celebrates the ‘end,’ as Ghost Dog himself finds deep meaning in ‘ends,’ but most of all, Ghost Dog: The Way of the Samurai celebrates where we are right now.  There are a couple moments in which Ghost Dog reflects on the importance of the moment, but even he seems to overlook the meaning of the way we are now.

I think Jarmusch finds the most beauty in the quirks and possible contradictions of character.  I found so much joy in the character of Ghost Dog’s friend, the French ice cream truck owner.  The same goes for the little girl Ghost Dog befriends through a shared love of literature or for the all talk-no bark mobsters who debate the meaning of constructed rap names, the ways of the old timey (media-exaggerated) idea of a gangster and the ethics of killing a female cop versus a male cop.

The common theme among all these characters was a sense that they have put themselves together to be precisely the way they are.  In other words, their personas were adopted rather than given, constructed consciously, through a learned language that has developed as they themselves have developed.  Some of the chosen attributes are selected from old ways of living, sampling those ideas, and adapting them to fit in the new world.  It’s why Ghost Dog considers himself a samurai, but he mostly uses guns with silencers rather than katana swords.

So Jarmusch is celebrating the art of putting yourself together, pulling from a shared pool of ideas, looks, tools, clothes, etc.  I think it was Richard Linklater who once referred to each person being their own canvas to which they can add anything they want.  You create your own canvas by how you dress yourself but also by what you learn and hold onto and what you consciously choose to make meaningful.