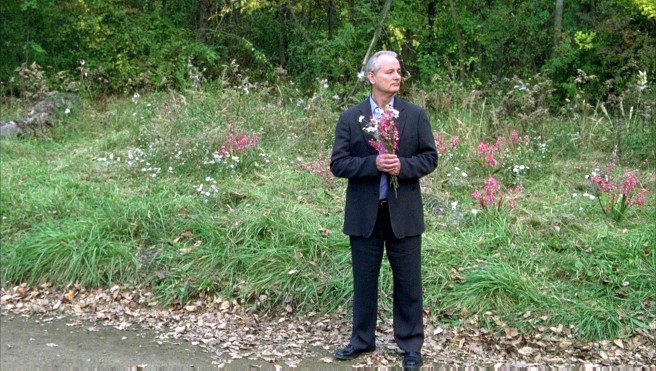 There’s something gripping about sad Bill Murray.  As Don Johnston in Broken Flowers, Murray mostly plays the same melancholic character as he did in Lost in Translation two years prior.  In both cases Murray feels like he’s playing a version of himself.  That’s because despite his own deep sadness, when he’s around other people he seems able to turn it on, to perform and in a sense, to keep up the ruse.  And who knows?  Maybe that’s what Murray is really like.  I would guess the answer to that is no, but the point is that we only know someone as famous as Bill Murray through their public image which is pretty much always some kind of performance.  So by portraying Murray’s character as someone who can continue to socially perform despite his intense despair, it feels like we’re watching someone we’ve known now for years.

And I think that helps us empathize with Don, as it probably did in Lost in Translation.  In Broken Flowers, Jarmusch gives us little to go off of, instead adding to the depth of the character through what Murray himself brings to the role.  The first act of the film is very quiet, with the bulk of the dialogue coming from Johnton’s neighbor, Winston (Jeffrey Wright).

Don’s girlfriend (Julie Delpy) leaves him one morning, and Don can hardly muster the fight to make her stay.  He spends the rest of the day sitting in the darkness of a home large enough to suggest he has nothing more to desire and small enough to suggest he may have settled somewhere along the way.  Don might just suffer from that illness which prevents you from feeling pleasure.  He might not describe himself as unhappy or depressed, but it’s clear he has nothing to wake up for in the morning.

Don’s life is profoundly sad.  To make matters worse (or maybe better), he lives next to a large family that looks like the perfect modern American family in ever sense of the word.  Winston, the father of this rambunctious family, is intent on helping Don solve a mystery he doesn’t really care about.  When Don receives a pink letter with a note typed in red ink, he is about to discard it, even though it’s from a mystery woman claiming he has a 19 year old son who has set out to find him.  It’s Winston who encourages Don to make up a list of former paramours so that he can help Don track down his son.

Although more than a little reluctant, once Winston organizes an entire trip (complete with flights, rental cars, hotels, etc.) Don decides to hit the road.  The second act plays like a series of short films or vignettes, often fading into and out of a scene like in Jarmusch’s Stranger Than Paradise (1984).  In these little vignettes, the only constant is Don.  We know that the other characters will appear and then most likely disappear from the story just as quickly, and Jarmusch does an incredible job of painting character portraits with the required efficiency to pull this off.  Like he did in Mystery Train (1989) and Night on Earth (1991), Jarmusch introduces empathy-inspiring characters that range from quirkily mundane to playfully obscure.  Hell, maybe those are the same things.

In the first encounter, Don reunites with Laura (Sharon Stone) who might, in other moments, be described as a hick.  She lives in one of those southern homes that looks like it could be vanquished by a small tornado in seconds, and she doesn’t seem to feel any horror as she describes how her husband died in a brutal car crash (race car driver).  But beyond this, Laura quickly becomes deeply vulnerable.  In one moment we suspect that Laura, based on the failure of all of Don’s romances, might want to tear Don apart, but in the next moment we’re worried that Don might incidentally tear her apart.  It’s unclear who hurt who or if anyone was hurt at all.

Don finds out pretty quickly that Laura is not the woman he’s looking for, despite a couple red herrings.  He spends the night with her and her daughter, Lolita, that night regardless.  Between the name Lolita and some of Lolita’s peculiar behavior, there is clear humor here, but the focus is still on Laura’s and Don’s shared vulnerability.  When he leaves the next morning, eyeballing Lolita as she continues to parade in and around the house, wanting to attract his gaze, we get the idea of how Don’s and Laura’s relationship ended, even if we don’t know what happened.

The next encounter is with Dora (Frances Conroy) and her husband, Ron (Christopher McDonald).  They live in a sterile home, and they don’t have children together, which, when it comes up in conversation, provides for a bleak glimpse into their marriage.  Like Laura, Dora comes across as vulnerable, but whereas Laura seemed to have the fight and the attitude to work with what she’s got, Dora feels weighed down by whatever it is that has happened to her in the past.  It’s in this part of the film that Ron tells Don, “It’s strange, how people’s lives change, isn’t it?”

By this point Don is ready to return home.  He’s no closer to finding out who the mother of his hypothetical son is, and it’s not clear that he wants to find out.  Winston encourages him to stay on this path, and Don then reunites with Carmen (Jessica Lange), a ‘pet communicator’  and Penny (Tilda Swinton), the youngest of the former lovers who also holds the most animosity towards Don.

These last two encounters come off as the most abrasive.  There is warmth between Don and Carmen, but it’s continually kept at a distance.  Don, perhaps incidentally, ridicules Carmen’s career choice, and she turns down his dinner offer after he pries a little too quickly into her personal life.

Penny doesn’t even want to hear Don speak.  He asks if she has a son, and she can’t even answer the question.  She calls over her biker boyfriend and his friend who beat Don up and send him packing.  Before he is knocked unconscious, Don notices a couple signs (pink typewriter) that suggest that Carmen is the woman who sent him the anonymous letter.

Before heading home, Don heads to a cemetery to visit the grave of another former lover.  All of these small reunions have slowly devolved from a casual night between old friends to death.  As Don went further down the rabbit hole, the women became more and more inaccessible.  It felt like, if Don had decided he wanted to marry Laura, she might’ve said yes, but that is absolutely not the case with any of the other women.

In the third act, Don returns home, defeated.  He receives a letter from Sherry, his girlfriend at the start of the film, which makes him think that the original letter might have been hers and been a trick.  Then Don sees a young man whom he thinks might be his son.  They have a delicate conversation in which he talks around the issue, but when Don brings up the issue of the boy’s father, he runs away, leaving Don alone in the middle of the street.  Then a car passes by, and Don makes eye contact with a young man in the passenger seat, played by Bill Murray’s real life son.

There is so much pain in this film and so many characters who either need a hug or therapy or both.  With Don, it feels like he’s both hurt past loves and been hurt by them.  The cycle is probably so constant and murky that he has no answers from failed relationships, just the pain of an open wound.

From some women, Don has run away, and with others, they have run away.  These relationships have all gotten to the point that they can never be repaired, whether because one of them is now married or simply emotionally-calcified or even dead.  When Don meets a boy he thinks might be his son, he tries his best to bridge this gap only for the boy to flee as fast as he can.  It’s the one relationship in the film that Don tries to improve, and it backfires horribly.

The two quotes that stick with me from this film are the one delivered by Christopher McDonald, saying “it’s strange, how people’s lives change, isn’t it?” And the second is when the boy at the end asks Don for some advice.  All Don can muster is how important the present is because the past can’t be changed and it’s pointless to worry about the future.  Though it’s something he may have read on the side of a starbucks cup, the boy approves of this advice, possibly because he knows it was pulled from thin air on the spot.

And so the film, then, seems to be about how things change and decay and how the only thing we can do is accept and even embrace it.  There is nothing Don can do to repair these old relationships, even though that wasn’t his intention, but there’s similarly nothing he can do for the future.  All he has is right now.

So Don will probably get back together with Sherry, and he’s most likely going to continue living as he was, because that’s all there is.  The rest will take care of itself over time, for better or worse.