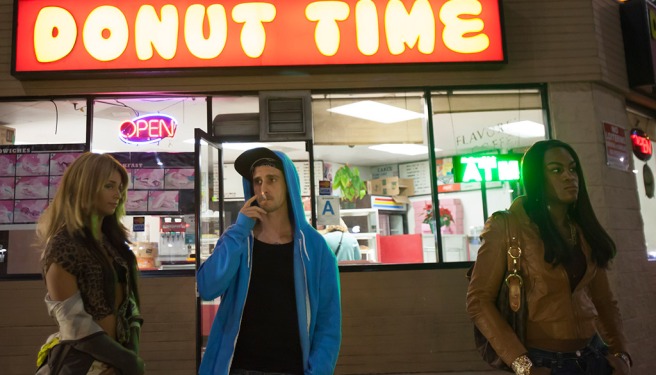 Tangerine, as a story, is about the friendship of two women in a community in Los Angeles that doesn’t have it easy.  They’re both transgender prostitutes of color, but the story focuses on their personal ambitions, which of course have nothing to do with their position in society.  Alexandra (Mya Taylor) wants to be a singer, and Sin-Dee (Kitana Kiki Rodriguez) wants to find out if her fiancee fooled around with another woman while she spent a month in jail.

The events of the story unfold over the course of a single night, Christmas Eve, and they play out as an elongated episode of television.  The plot of one person obsessively searching for the woman who may have slept with her fiancee is treated as a story arc in a comedy.  The viewing experience for the audience, is one of some amusement at first, but it evolves into one of empathy.  When we first meet these two friends, they speak quickly and in a lingo we may not be familiar with.  When they go on and on about one girl’s boyfriend, it’s easy to roll your eyes at their concerns.  Who cares?

The story cares, certainly, as it should.  The more we learn about these characters, the more we see how vulnerable and tough they are.  While both Sin-Dee and Alexandra have their goal for the movie, we follow them on a few side adventures as they pull tricks down various seedy streets.  This story is more about the world they inhabit than their personal stories, but those personal stories are our way into this world.

The movie might be a little heavy-handed if it introduces us to these characters as transgender prostitutes of color.  Instead it introduces us to Sin-Dee and Alexandra and fills in the blanks later.  They are people first, with goals and dreams, and demographic statistics second… perhaps not even second.

Now, Tangerine as a movie is about the process of director Sean Baker making a feature film on an iphone.  The entire movie was shot with the iphone 5s, two of them, as well as a couple camera stabilizers and accessories to make the picture work well enough not to distract from the story.  With an intense color grade to exaggerate the color in the scene, Baker uses the technology to his advantage, helping emphasize the fiery passion and energy of this almost invisible world and community.

The image of Tangerine at any given point in the movie is a bit grimy and undeniably colorful.  It’s sort of a duality of tarnished beauty that reflects the way Sin-Dee and Alexandra live.  Their clothing is sparkly, but it always feels like something you’d buy off a clearance rack or from garage sale.  This isn’t to speak down about the way they dress, but it’s unlikely they have the money to afford anything expensive.  It’s just that they want to look like they do have that kind of money and that kind of lifestyle.  In other words, they try to dress in a way that suggests they don’t live as close to the streets as they do.

The more I think about it, this movie reminds me of Sofia Coppola’s The Bling Ring, about a group of teenage burglars who rob the houses of the rich and the famous, adorning themselves in their clothing and jewelry.  It’s a story about people obsessed with fame and celebrity who attempt to remake themselves in that tabloid image.

The same goes for Sin-Dee and Alexandra.  Their image of a powerful, sexy, successful woman seems to be taken from a combination of E!, People Magazine and MTV.  It’s a fashion sense created by current popular trends, then filtered down through the ranks until it’s affordable.  Where one type of dress might have diamonds, theirs might have a plastic meant to look like diamonds.

In Tangerine, both Sin-Dee and Alexandra pursue their individual goals with an intense energy.  In both cases there is a degree of denial, as Alexandra can’t see how bleak her future as a singer is (she had to pay the bar to let her sing), and Sin-Dee avoids telling her friend that her boyfriend is her fiancee because deep down even she recognizes how unhealthy their romance is.  Sin-Dee’s boyfriend/fiancee is also her pimp, and he shows a lack of caring for her beyond as a commodity he can buy and sell.

Both women are marginalized and disrespected, and in the end all they have is each other.  The first time we see Sin-Dee and Alexandra stripped of their layers of clothing and wigs is in the laundromat late that night, when they’re alone together.

Having the story take place on Christmas Eve further emphasizes this idea of family between members of this community, specifically Sin-Dee and Alexandra.  Christmas Eve is a time meant to be spent with family, and all these two women have is each other.  There is a slight extension of this family in the form of Sin-Dee’s fiancee and an Armenian cab driver who leaves his own family to try and make it with Sin-Dee, but in both cases the man proves to be disappointing to say the least.

Perhaps there’s something to be said here about gender roles and gender oppression, but the heart of the story is about offering a glimpse into the lives of two people not often seen on movies and television.  The kinetic energy of these characters and of the filmmaking demonstrates Sin-Dee’s and Alexandra’s remarkable single-mindedness and toughness.  Nothing much fazes them because they’ve seen it all.  These are people who have been forced to accept the role society has given them and to harness their own sexuality as a tool.

And that’s the most tragic aspect of the story, but one which is mostly left uncommented upon.  These are women who were once men and grew into themselves, realizing that they identify as women sexually and beyond.  Yet because they need to survive, they’re forced to take this thing they’ve discovered about themselves and detach it from their hearts and souls in order to prostitute themselves and make money to get by.  It’s like discovering you know how to fly but then only using that ability to run drugs back and forth between countries.

Tangerine celebrates the people within the character.  This movie is tender and beautiful and fragile and occasionally tough to stomach.  It’s like a lower-budget version of an old Gus Van Sant film, like Mala Noche, Drugstore Cowboy or My Own Private Idaho.  These are all stories of characters who have to sell part of themselves to get by, and their ultimate battle is to retain enough of themselves to live and not just survive.