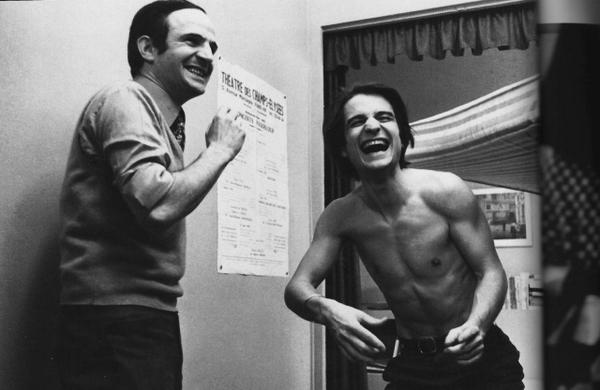 Bed and Board is the sequel to The 400 Blows (1959), Antoine et Colette (1962) and Stolen Kisses (1970).  Each film follows Antoine Doinel (Jean-Pierre Leaud) at different points in his life.  While The 400 Blows was fairly dramatic, showing a kid’s tough home life and his intense desire to escape that life, the following two films were much more comic, treating Antoine’s life and pursuit of love as a bit silly and mostly doomed.

At the end of Stolen Kisses Antoine gets together with a woman named Christine (Claude Jade), but the film implies that their forthcoming union is almost arranged, as if Antoine doesn’t want to be with her, he just thinks he should.  It’s the transition film between Antoine as a child, really figuring things out, and Antoine as an adult here in Bed and Board, having to commit to something.

Christine, in one scene, laments that she isn’t courageous enough to demand the mother of one of her pupils pay her for violin lessons, even if the money is rightfully hers.  So Antoine, along with Christine’s parents, come up with a plan in which Antoine will politely request the money for her.  And it works.  But then in another series of scenes, Antoine is shown lending money to a friend he sees on the street, and every subsequent time he sees this man, the man admits he owes Antoine money but asks for even more and says he’ll pay it all back at once.

So we are given opportunities to see the ways Antoine and Christine are more childlike than they realize.  Christine briefly touches on her attraction to a famous musician whom she has a framed picture of in their bedroom, and Antoine ultimately has an affair with Kyoko, a Japanese woman he meets at work.

The second half of the film, following the birth of their child and Antoine’s affair, feels like a Woody Allen movie.  Antoine becomes a little more disgusting and selfish, unaware that he’s letting his marriage fall into ruins like that of his parents which he so detested as a child.  I suppose the point of this film, within the context of the series of Antoine Doinel films is to show the pattern of life.  Antoine runs away from a life, as a child, which he is now helping to recreate himself.  He claims to fall in love not just with a woman but with her family, acknowledging that it’s because of his own poor experiences with his parents growing up, yet he can’t accept or even notice his own imminent failures as a husband and father.  He’s no better than his parents.

Once Christine discovers the affair, she kicks Antoine out of the house, and he simply goes to live with Kyoko.  Their relationship quickly stalls, and later Antoine starts to dish about their struggling relationship to Christine over the phone, as if she’s just his best friend.

In one dinner scene, Antoine excuses himself from the table with Kyoko more than a few times so he can go make a phone call and complain to Christine about how there’s nothing to talk about with Kyoko and how she insists on ordering dessert, prolonging the painful dinner conversation.  It’s incredibly petty and childish for him to complain like this, let alone to his wife on whom he so recently had an affair.  When Antoine returns to the table after the last of these calls, Kyoko has left, making it so he doesn’t even have to bother breaking up with her.

In the end, Antoine and Christine get back together, and we see them leaving the house for a show in the same fashion as two of their older neighbors, a married couple that once seemed to be having marital troubles only now we see that the strife is simply a part of the romance.

Whereas Stolen Kisses was in some ways a broad-ish comedy, finding comedy in Antoine’s antics and desperate search for love, Bed and Board feels more subversive but just as funny.  Truffaut paints marriage as something that can be tender but is more often just another thing to check off your bucket list.  Antoine and Christine share a few intimate moments, and they work well together, but most of the film shows them at odds with each other and yet still drawn back together.  Like Stolen Kisses, they end up together out of habit more than anything else.

Their neighbors, an older couple who is only seen fighting with each other (the man angrily throws the woman’s purse and jacket down the stairs to get her to hurry up), seem unhappy, almost as a warning of where Antoine and Christine may end up.  But when Antoine, in conversation with a friend, explains his dislike for his parents’ broken marriage, it’s clear he already has a warning of how things could end up.  The neighbors, then, aren’t a warning of where they could end up but a promise of where they will end up.  Antoine’s and Christine’s marital troubles, by the end, feel almost inevitable, even though he didn’t have to stray from their marriage in the first place.

Love in Bed and Board isn’t passionate or even thought through.  It’s neither primal nor everlasting.  Love in this film is more about finding a home, something to give you comfort from the world.  Antoine speaks more lovingly about his warm bed than he ever does about his wife.  Even outside of the marriage, Antoine finds something like love in Kyoko but quickly realizes the struggle to have even the simplest conversation with her or to live by her customs (he struggles to sit on the ground at dinner like she does, her legs folded simply beneath perfect posture).  In another scene Antoine visits a prostitute after lying to his estranged wife that he just wants to go for a walk (after she offered to stay with him when it seemed like that’s what he most desperately wanted).

Like the men of Woody Allen’s films (often Woody himself), Antoine comes off as selfish, petty, small, insecure and unable to take even the briefest look at himself in the mirror.  He doesn’t like how he feels so he reaches outside of himself to find comfort.  First, going back to Stolen Kisses, he finds that within Christine (after a previously failed relationship), then here he thinks he finds it in becoming a father but soon looks for it in Kyoko and then in the prostitute.  Ultimately, though, Antoine returns to Christine and it feels not like he’s making up for his own shortcomings but that he’s just adding another bandaid or a gaping wound in his psyche.

The image of the young couple at the end suggests they will stay together (like the neighbors), but that they will still argue about the small things and suffer through the big ones.  They might be creating an environment for their son like Antoine himself had growing up, or maybe it’s just that Truffaut is poking fun at marriage and how seriously we take it.  Perhaps Christine is right for taking Antoine back because they do share some kind of connection, even if it seems to work best when they act as friends, not spouses.

Either way, Christine was always likely to take him back because the theme of this series of films seems to be that life goes on, no matter what.  You’re a kid rebelling against something you end up fulfilling yourself.  On a wider level, people get married and often stay married, even if that’s not always the case.  There are marital crimes here and there, but humans grow up, marry, have kids and the cycle repeats.

Funny enough, in the follow up to this film, Love on the Run (1979), which I have not yet seen, Antoine and Christine get a divorce.  So the image of them at the end of Bed and Board does suggest some kind of future doom.