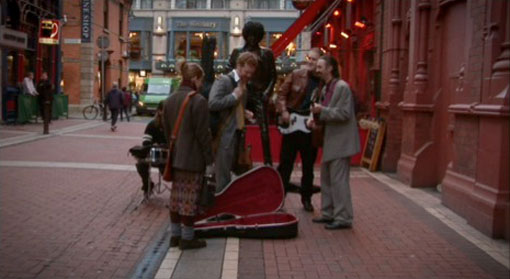 The title to Once could mean a variety of things, but within the movie it seems to me to imply the simple change from saying “no” to everything to saying “yes” to just one thing and getting out of your own way.

As I write this I’m in Dublin for the first time, and while I lie awake last night still waiting to adjust to this time zone, I pulled out my computer and watched this movie.  It’s a story that takes place right here in Dublin and a movie I’ve meant to watch for sometime now.  It’s one of those movies I had never seen but almost convinced myself I had.  I knew the general story, and I knew a few of the songs very well.  The music is tremendous, and watching Glen Hansard belt out “Say It To Me Now” on Grafton Street at the start of the movie is like watching a flower bloom before your eyes and then wilt and die just as quickly while still leaving you with a feeling of thankfulness rather than anything resembling morbidity.

Once is a movie about a guy, played by Hansard who busks on the Dublin streets while avoiding taking any actual steps towards his goal of making music professionally.  Then he meets a girl (Marketa Irglova), who approaches him on the street during the performance of that blooming flower of a song, and she encourages him to chase his dream.  Now, that’s basically the whole movie in a nutshell, but the guy (unnamed throughout the movie, just like the girl), doesn’t immediately take the necessary steps towards his emotional and professional growth.

The guy and the girl develop a quick bond, based on their shared love of music, and it never turns romantic even after a brief misstep on the guy’s part that might push her away for good but ultimately doesn’t.  In a lot of ways the two characters in this movie feel like Pixar protagonists.  Their affections are innocent, even childlike, and their chemistry is so dissingly tender and warm-hearted.  They’re like the couple at the beginning of Up as they play a borrowed piano together in a music shop or sit in the back of a bus making up songs on the fly.

These are two characters who, judging on their circumstances and relative poverty, have been through the ringer, but they’ve maintained some kind of core, spiritual well-being.  They’re dreamers, like those of La La Land, but they’re dreams have been tied down and restrained like Daenerys’ dragons for a season or two in Game of Thrones.

There’s plenty of reason for pessimism, and certainly the guy seems dour on the surface when he’s not performing, yet he performs all the same.  In the very first scene, the guy bickers with a seedy bystander who circles him and his open guitar case (with enough money for a pint, maybe three) and ultimately snatches the case and runs off.  The guy, knowing this is coming, chases after him when they catch up, the thief draws the reluctant guy in for an embrace, explaining how much he’s struggling and just needs a little cash, which the guy gives to him.

Next we watch the first full song of the movie, as the camera slowly walks in on the guy playing his heart out to the empty night on Grafton street, but when he’s done, the camera walks back and we meet the girl.  She praises the guy’s performance while giving him less than a euro, which he sarcastically but playfully mocks, reacting more from the exhaustion of wearing your heart on your sleeve than any actual disdain for the small size of her donation.

The guy is an interesting, complex character, but he seems quite simple at first.  He’s a guy who wants to make a buck but really wants to find a meaningful connection, and when the girl offers him one, he first considers the amount of money he gave her, almost completely writing off the possibility of friendship she represents.  And I guess none of that is a surprise.  It’s not like we walk around the street believing that a complete stranger could soon become a dear friend.  We’re all trained by our own instincts and experiences, sometimes making us feel and act like stray dogs on a cold night.

The point is that the guy demonstrates an incredible musical talent and voice, but he doesn’t expect anything to come of it.  He is resigned to whatever this kind of life is, completely unaware that he’s trapping this caged bird of a voice he has on his own accord.  He’s a person in prison, unable to see that the key is in the lock and completely reachable.  As a side note, I looked at an Ireland guidebook today, and it described Dublin as “pulsating and manageable,” and I think that also describes the guy’s life as a musician.  It is at once completely alive and completely held in check.

But the girl brings it out of him.  She encourages him to record his music, and along the way their friendship blossoms.  The girl has an entire life of which the guy is completely unaware as is the audience.  The reveal that the girl lives in a lower end part of town with her mother and two year old daughter feels quite sudden because it’s so unexpected.  At first she comes across as the “Manic Pixie Dream Girl,” a character who exists only to get the sullen male protagonist from point A to point B, but in this reveal we see just how layered she is and, similar to the guy, how she is holding herself back.

The girl is married, we later learn, but she doesn’t miss her husband whom she left in another country.  The problem, though, is that she wants her daughter to grow up with a father, so she considers getting back with her husband, and later she does.

This new information about her character influences how we see the way she’s acted towards the guy this entire time.  Whereas he first thinks of her romantically, she always sees him as a friend and maybe even as a child, in an affectionate way.  The girl wants what’s best for the guy in the same way she wants what’s best for her own daughter.  And that doesn’t mean there is nothing she gets from her friendship with the guy.  While she encourages him to work towards his career goal, eventually moving to London, he helps encourage her to play music again, which she hasn’t done in a while because of a lack of encouragement from her husband and the high cost of owning a piano.

I’ve already described what happens in this story.  They both help each other out, and eventually the guy moves to London while the girl reunites with her husband, and they’re both appreciative of the friendship they shared.  And while this is in no means predictable (because I’m sure plenty of people expect the couple to become romantic by the end), it does feel inevitable.  Still, there are a few surprises along the way, though this movie is a low budget fairy tale in which everything that happens is pretty much positive.

The only suspense we have in the movie comes from knowledge that these characters, particularly the guy, have been suffering quietly for sometime now.  So when good things start to happen, we, like the guy himself, anticipate some kind of failure because surely he has been failing his entire life, for the most part.  The scene I’m thinking of is when they finally get into the recording studio after which we’ve established that neither the guy nor his other temporary bandmates, have any recording experience.  The audio engineer certainly expects nothing of them, so when the guy begins to play his first song, I expected him to fall flat on his face and then have to recover in the third act.  But instead he and the band fucking nail the song right away and Jesus is it a good song.

The guy succeeds, and we’re all happy, and everything is super swell, and the whole movie is like a dream.  Everything in this movie is positive, and the only forces of antagonism (or doubt) come from the two main characters themselves.  The question is never ‘will people like the guy’s music?’ but rather ‘will the guy ever go for it?’

Richard Linklater himself delivers a message from his film Waking Life (2001) in which he says, “behind the phenomenal difference there is but one story, and that’s the story of moving from the ‘No’ to the ‘Yes.’ All of life is like, ‘No thank you, No thank you, No thank you.’ And then, ultimately, it’s, ‘Yes I give in, Yes I accept, Yes I embrace.’ I mean, that’s the journey. Everyone gets to the ‘Yes’ in the end, right?”

And by the end of Once, both the guy and the girl get to the ‘yes.’