Directed by the Coen Brothers 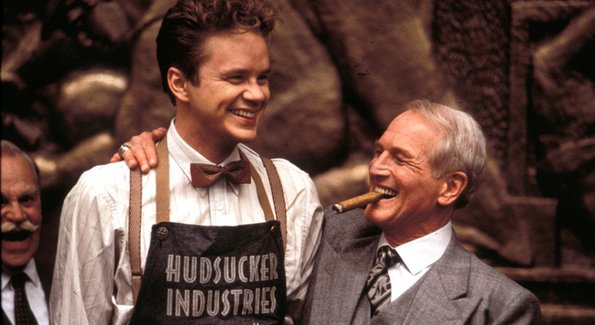 It’s hard to get a grip on The Hudsucker Proxy.  It seems to say a lot, after all it is a Coen Brothers movie, but it also comes off as much too silly to take seriously.  Like with A Serious Man, it’s hard to tell how much we’re supposed to read into this story and it’s broadly comedic characters.  But the one thing I feel confident on is that this movie mocks self-importance.

We start with big, old, white businessmen seated around their comically large board room table in an even bigger room with ridiculously high ceilings in a building too far off the ground.  They celebrate their continued financial success, but then Waring Hudsucker (Charles Durning) throws himself out the window, and Sidney Mussberger (Paul Newman), the head of the board, moves forward with discussion of what to do next, even as the wind from the whole in the glass left by Hudsucker’s leap howls through the room.  It’s clear that in this world there is no time for mourning, let alone any consideration at all of the human cost of doing business.

Our protagonist is Norville Barnes (Tim Robbins), a fresh-faced, aspirational, idealistic entrepreneur with no business experience, who will soon run into Sidney Mussberger and the rest of the board.  Norville’s strength, we learn, is his naïveté.  First he gets a job in the mailroom at Hudsucker Industries, and when a “blue letter” arrives, all the other mailroom workers hide, so Norville is tasked with taking the letter all the way to the top floor, to Sidney Mussberger.

The top level executives are presented as lions, and the mailroom workers are the mice.  Norville, though, is a courageous mouse, perhaps a dim-witted one, but courageous nonetheless.  When he gets to the top floor he forgets all about the letter and seizes the moment to tell Mussberger about his great business idea: it’s a circle… “for kids!”

Norville’s idea, which he holds so dear, is a prototype for the Hula Hoop, that thing we all played with as a kid.  His “prototype,” though is just a paper with a circle drawn on it, and when showing it to someone, he never explains what, exactly, the circle is unless asked upon.

A lot of the humor comes from the simplicity of this idea as well as the ignorance on Norville’s part, not realizing that his great invention isn’t so obvious to everyone else as it is to him.  When he shows Mussberger the design, again the paper with the circle drawn on it, he flips the paper around, as if realizing it was upside down.

It’s a funny moment, but because this is a Coen Brothers’ film, I expect this to be something more than a simple gag.  If it means anything, it would seem to me to be lampooning the formality of Norville’s presentation, and the apprehension with which he approaches Mussberger.  The tone of this scene, as part of the film, is one of slapstick comedy, yet the tone in the room, were this to be real life, would be one in which you could hear a pin drop.  In other words, the Coen Brothers’ take moments that are incredibly serious to the characters involved and present them as utterly meaningless.  I guess that goes back to the idea of self-importance.

All these characters, from Mussberger and the board to Norville and even the elevator operator and the journalist we will soon meet, take themselves too seriously.  They each have their own cloud of ego storming around their heads and obstructing their view of the world.  Symbolically, that might be one reason why he hardly ever see New York outside of the Hudsucker skyscraper.  Everything that takes place in this world takes place in this building.  Their work lives are their lives (and that’s why Hudsucker himself jumped to his death).

New York is only ever seen through the windows of the Hudsucker building, as this gray landscape in which the buildings are silhouettes, and the sky is…. melancholic, kind of like the famous image of New York used on the cover of a Vampire Weekend album: 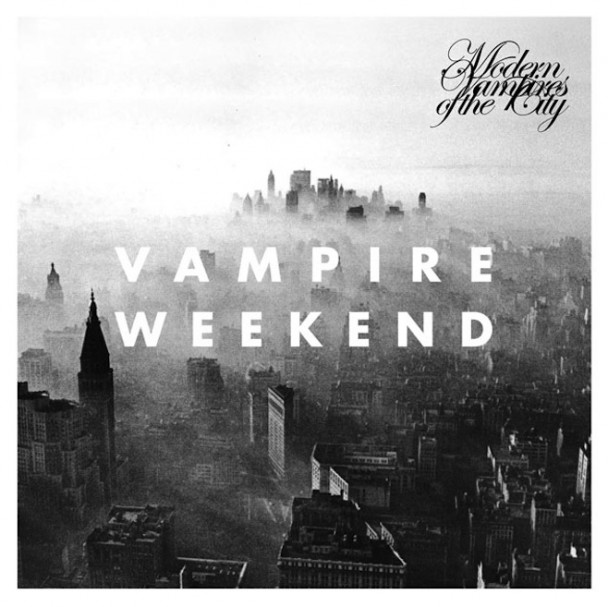 That photo is from a historic ‘event’ in New York City in 1966, seven years after this film takes place.  The smog was dangerous, and the feeling I get from that photo is one of rotting or something haunted.  New York in the distance looks like a series of tombstones, and everything in the middle feels like a wasteland.

So maybe there was an intended connection between this feeling and the version of New York we see in this film.  The focus on business and manufacturing (the version of business in this movie is uncomplicated, you build something yourself for a price and sell it for a marked up price, business at its simplest) feels reminiscent of the Industrial Revolution, a time when surely the city was overrun with smoke and smog.  It offers a sense that, while capitalism thrives for its beneficiaries, the businessmen, it’s slowly killing the world outside.

Norville quickly becomes the new Hudsucker Industries CEO, appointed by Mussberger and the board when they realize that the only way to maintain control of the company is to tank its stock low enough that they can buy the remaining shares.  It’s a silly premise for a silly movie, yet as the silliness adds up, the importance of the subtext seems to build as well.  It’s like taking a joke too far.  At first it’s funny, then it’s head-scratching, and ultimately it says something about the performance as a whole.  The comedian’s joke isn’t the takeaway as much as the comedian him or herself is.

Norville’s rise up the corporate ladder, or leap I suppose, contrasts with the slow degradation of his humanity, like the world outside.  As he succeeds in business, he dies in life.

Along the way he meets reporter Amy Archer (Jennifer Jason Leigh), a fast-talking journalist who never fails to mention her Pulitzer.  She infiltrates the company, posing as Norville’s secretary, all so she can get the real scoop on who this “idea man” is.  Her takeaway is that he’s an imbecile, but as she learns what the company has in mind for him, she comes around, seeing him as oddly heroic even if he doesn’t realize it himself.

Norville’s widely-publicized appointment as CEO is meant to throw everyone into a panic and sell off stock.  It works until Norville pushes to get his Hula Hoop made, and Mussberger, seeing the idea as unimportant and bound to fail, lets him go through with it.  Everyone, save for Norville, is stunned when his idea turns an enormous profit, shown through a brilliant montage that I can’t get out of my head:

The idea that the business succeeds by trying to tank suggests the absurdity of business and the people at the forefront of capitalism.  Capitalism, in some way, tries to understand people, I’d say, because it wants to profit off of them.  Yet in this sequence of events, we see how they can profit without even trying to, suggesting that they might fall flat on their faces when they do try to understand people.  Either way, the point is that there is a huge gap between the people willing to spend their money, and the people who want to collect it for themselves.

As the pressure mounts, Norville is forced out of the company, and he finds himself on top of the Hudsucker skyscraper, ready to jump to his death like Waring Hudsucker himself.  This moment is teased at the very beginning of the film, and it’s funny, but anytime a movie begins with an image of where the character finds him or herself later in the film, the moment they show is always at the end of act 2, or their lowpoint in other words.  The point of these teasers is to show the predicament the characters will find themselves and thus, to hook you into the story.  Breaking Bad did the same thing in its pilot episode, showing Walt holding a gun out towards the oncoming police before we establish him as a mild-mannered high school teacher.

In this case, Norville tries to go back inside his office but falls off the side.  He is saved, however, when an angel, who masquerades as a janitor in the Hudsucker building, stops time so that he is suspended in mid air.  The angel then fights a demon, masquerading as an office handyman in the same building.  The demon is the one who has to repaint the doors anytime a new executive is hired, fired or reassigned.

The angel wins, of course, and Norville lands safely on the ground, his would-be fatal momentum alleviated by the pauses in time.  While suspended in the air, Norville receives a visit from the ghost (or angel) of Waring Hudsucker who explains why he ended his life and then tells Norville to read the blue letter.  He does, and the letter bequeaths to the Waring’s replacement, all of his shares of the company.  This means that Norville controls 87% of the company, giving him all the power whereas Mussberger and the board had believed that 87% to be auctioned off to the public.

With the power, Norville takes control of the company and reunites with Amy Archer, happily ever after.

I love that a film like this hinges on a literal fight between an angel and a devil while time stands still.  Like with other Coen Brothers’ movies, there seems at first to be little logic that dictates the plot mechanisms in their stories, but then it just seems that the focus is always on the subtext which often becomes more textual than the actual text as the story goes on.  This film gave me a similar feeling as The Man Who Wasn’t There, A Serious Man, Burn After Reading and even No Country For Old Men.

In a lot of these stories, the protagonist isn’t in control, at least not in the movie’s climax, when the protagonist is typically thought to be the only one in control.  Think of Luke and Vader battling in Star Wars or any move with a Mexican standoff or any James Bond or Harry Potter movie.  The story always boils down to the hero fighting the villain.

But in this case, as well as in many other Coen films, the climax occurs outside of the protagonist.  In this case, Norville is suspended in mid air while the most important conflict in the film is resolved.  In The Man Who Wasn’t There, Ed Crane is arrested due to something he (nor us) could have predicted, as if his arrest and ultimate demise was fate.  In A Serious Man, very little makes sense upon a first viewing, and there is the sense that there are many powers outside the characters’ control (storms, God).  Then in No Country For Old Men, the man you think is the protagonist dies halfway through the story, and the villain gets into a car crash just because and walks off to end the film.  In that case, these plot points say something about the theme of the film and are not pieces of the narrative puzzle as in most movies.  In a typical action film, a character could only get into a car accident if it was somehow set up earlier on, but in No Country, it just happens out of the blue.

So in The Hudsucker Proxy, control is mostly an illusion.  Norville isn’t really in control of the company, and the company doesn’t really have as firm a handle on their audience as they think.  And similarly, you the viewer doesn’t always know where the story is going.