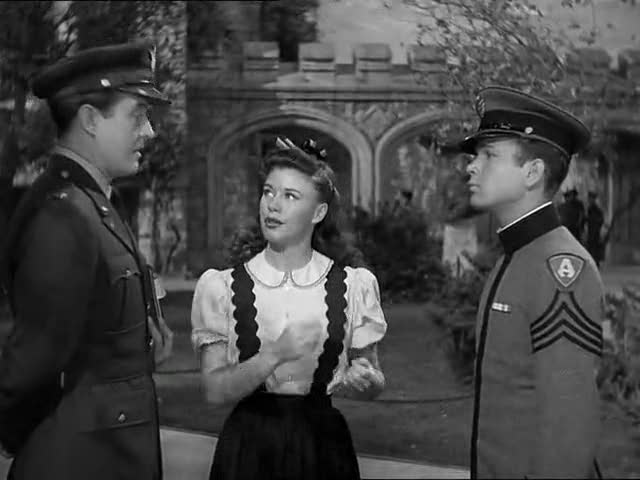 The Major and the Minor is what I imagine a lot of old Hollywood films are like.  It’s a comedy that’s ultimately a romance, and the screwball comedy seems deeply connected to the performative, physical comedy of the silent film era from not so long before.  This film is also the first directed by Billy Wilder, a famed director I know nothing about, almost.  I do know he won multiple oscars for The Apartment (1960), and he directed such famous films as Double Indemnity and Some Like it Hot which I haven’t seen.  But that’s all I know.  Oh hey, he directed Sunset Boulevard too.

The Major and the Minor is a crowd pleasing film, as I imagine many were at the time, and it’s surprising, in a time where there is a demand for more female-lead movies, that this film seems to say so much about gender.  I just imagine that every pre-1950 movie treated its female characters with disdain or ambivalence at best.  But The Major and the Minor focuses on the poor treatment thrown Susan’s way (Ginger Rogers), and when she’s forced to pretend to be a child, the behavior of the adults towards her character, when viewed as symbolic of the way we’ve already seen her treated just for being a woman, seems so biting.  The humor is always at the expense of the ignorant characters who don’t realize that she’s not 12 year old ‘Su-Su’ as she claims.

There are several looks Ginger gives those ignorant characters, in which she expresses her disdain for their naivete, even as it benefits her.  When the story begins, Susan is giving up all her hopes and dreams of making a life in New York City, but this hasn’t got her down.  She’s actually pretty content, in fact, taking solace in the fact that she still has the fare to take the train back home to Stevenson, Iowa.  When she learns that the fare has been raised from $27.50 to $32.50, she decides to pose as a child to get the half-fare to make it home.  This is a comedy, of course, so we must suspend disbelief to understand why Susan would pose as a child rather than to try and make the $5 to pay the fare.  She must really want out of New York, and based on the one scene we’ve seen of her New York life, it’s easy to understand her frustration.

On the train, there is plenty of comedy to be derived from “Su-Su” having to pretend to be 12, such as when she sucks down a cigarette outside before having to evade the conductor.  On the run, she ducks into the compartment of Major Philip Kirby (Ray Milland) who, somewhat surprisingly, sees her as the child she pretends to be.  In order to stay hidden, she plays into this, and Major Philip comes off as a complete, albeit likable, doofus.

When Philip’s fiance mistakes (or correctly sees) Su-Su as an adult, he asks her to join him to the military academy where he teaches so that he can prove to his superiors (who are close with his fiance I suppose), that Su-Su is just a child and not someone he is having an affair with.  When Su-Su meets these superiors, they all accept her as a child.  It’s silly, really, and the film focuses on her trials and tribulations within the academy, having to put up with the teenage affections of a bunch of military students who have made a schedule in order to share her, which she is the last to know of.

While Susan underwent this “transformation,” in order to get home, she stays at the academy because she’s falling in love with Philip.  We only like Philip, I’d reason, because he’s nice, showing her genuine affection while everyone else tries to take something from her.  It’s funny, too, that we’re meant to like Philip because he might be the most dim-witted character of all.

I think a lot of the male leads in films like these, and from this era, are dim-witted.  Now that I think about it, oftentimes the female character is the one who gets to roll her eyes, able to recognize the comedy given to the audience, while the male characters is often the butt of the joke.  I’m not sure exactly why that is, but it’s something the Coen Brothers have utilized in several of their broad comedies, making someone like George Clooney the good-looking but dim-witted character at the center of the love story, such as in Intolerable Cruelty.

But what stands out about this one, is that Philip’s growing love for Susan, pretty much expected in this genre of a film, is creepy since he believes she’s 12 years old.  So we watch Philip fall in love with her, and we’re not meant to be put off by it, though it’s hard not to be, at least by today’s standards.  And while this is happening, Susan is just as smitten with him, yet she still has to uphold the Su-Su disguise.  And I know it’s a love story, but how the hell could a 40-ish year old man fall in love with a woman talking like a baby the whole time, which is what Su-Su does, because that’s Susan’s idea of a child.

So there’s a lot of weird elements like this going on, and it’s interesting to try and see what this says about this time period and about films of this time period.  But the film is very enjoyable, wickedly funny in parts, and I’ll be damned, I wanted the two of them to end up together.  People who make movies know what they hell they’re doing.  There is the right combination of earnestness on the parts of the leading actors, the right swell of music at the right moment, the right amount of antagonism from characters we don’t like and thus want to be defeated, and the right amount of charm.

And what’s so funny about this is the way these characters do ultimately end up together.  At the very end, Philip sees Susan at the train station, and he recognizes her as Su-Su but immediately realizes that she’s not a child, and they kiss, “The End.”  The sudden quickness with which everything resolves itself is hilarious, particularly because he never questions why she would pretend to be a child.

Hell, even that happy ending feels predatory, like Philip never cared.  His attraction to Susan the child was creepy, and his attraction to Susan the adult overlooks what might be seen as mental instability (if you don’t know the circumstances of her transformation, but even then it’s very peculiar), as if he could care less about what’s on the inside.  He just needs Susan in his life.

The film opens with Susan visiting a man’s apartment to give him a scalp massage.  We’re told that this is her latest job, and, we learn, her last gasp at trying to remain independent in New York City.  The appointment doesn’t go well because the middle-aged man continually hits on her, offering drinks and asking her to perform the duties of an escort rather than what she’s trained to do.  Understandably fed up, Susan leaves the apartment and the city, and this scene sets up the theme of her own forced subservience to the people around her.  In this case it’s as a woman, where she’s expected to put up with such treatment by the man and by the elevator operator, but then through the rest of the film this treatment is forced onto her as a supposed child.  But since we know the truth, it’s hard not to draw the connection between her treatment as a woman and as a child, basically until you get to the point where the attitudes of others is the same.  She’s trapped, throughout the story, and it’s a startling point of view in a film that seems to be more about escapism, like so many in this time period.

But I loved it.  It’s easy to stereotype Hollywood films from the 40s (or anytime), and write them off as sappy romantic crap.  Of course that’s a broad generalization, and it often looks past the value of sappy romantic crap (there’s a time and place for everything), but this film really has something to say, and it’s great.  It’s also very well-written, and the humor works just as well now as it did then.

I wonder if there are films like this now.  Most modern movies seem to have trouble balancing such humor and romance.  If they have humor, they’re a comedy with a forced romantic subplot, and if they have romance, then they’re a romantic-comedy in which the comedy is secondary to the romance.  Perhaps I’m not fully appreciating certain movies, but when I think of modern romantic movies, I think of love stories adapted from Nicholas Sparks novels in which the goal is to get you to cry (The Notebook) rather than to cheer.  Is that escapism?  Sure, I suppose it is.  And I don’t know what the broader takeaway is, but there’s something to be said about movies of this era looking to make you laugh and cheer to get out of your own world for an hour and a half while comparable movies now aim to get you to cheer and cry to get you out of your own head for a while.