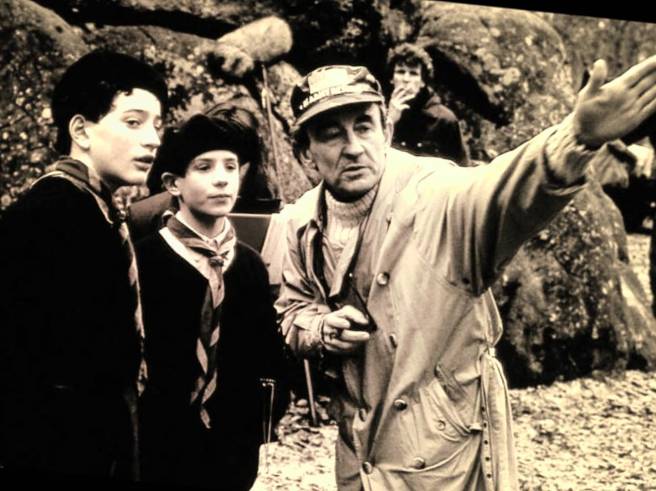 Au Revoir Les Enfants is a story straight from director Louis Malle’s childhood.  It’s a very personal film, one you might expect to be among his first rather than thirty years into his professional career.  It’s a story about a French boarding school in wartime France.  The Germans had already occupied France for around four years at this time, and the fear of the war, so close to home, has been replaced by something else.  The kids in this film live in a place in which nothing is quite as scary as it once was, and this gives them just enough room to live as though nothing were amiss.

That means that their concerns are related to embarrassment, wetting the bed, bullying and being bullied by other kids, bartering to get cigarettes and sneaking in elicit stories at night in the form of Arabian Nights.  The war is just background noise.  The kids get excited, nervously excited to be sure, when an air raid sounds and they have to hide underneath the school while bombs crash above.

I think what’s supposed to stand out most about the characters in this story is how resigned they are and perhaps how adaptable or naive they might be.  We’re not sure if the kids should be more worried about the state of the world or if the way they take to their circumstances is admirable.

The story begins with Julien Quentin (Gaspard Manesse) tearfully saying goodbye to his mother, about to board the train to the school where he will spent most of the next year.  He doesn’t want to go, and the degree to which he cries and resists boarding the train makes him out to be, for lack of a better term, a momma’s boy.  He is vulnerable and silent, but this image of him is suddenly contrasted with the role he plays once he’s in school, surrounded by other boys where everyone is equal.  Julien is much more of a tough guy.  He tells new student Jean Bonnet (Raphael Fejto) not to mess with him with the tone of a mob boss.

Julien might as well run the small ecosystem among unruly children that makes up the school.  So these two wildly different versions of him paint a picture of empathetic, vulnerable children forced into a situation where they have to fight to survive, in some sense.  Though it’s not life or death (not yet) in their world, there is a huge amount of pressure to not let oneself get picked on.  Combine that with the boundless, competitive energy of such youth, and you’re never really safe inside the school.  I was struck with how nervous the scenes of kids picking on each other made me.  It felt very real, something most kids go through whether in school or at camp.  When a group of kids are thrown together, certain social dynamics play out.

The Julien we see boarding the train, properly dressed in his school uniform, might as well be going into war.  And the dichotomy of the two images we see of Julien within the first ten minutes of the film is comparable to the two sides of any civilian turned soldier.  You turn down certain aspects of yourself to survive in a world that prioritizes very little.

Au Revoir Les Enfants focuses on the rivalry turned friendship between Julien and Jean Bonnet.  At first their contentious relationship has only to do with familiar childlike social dynamics.  This is Julien’s turf so he puffs his chest out, but anytime Jean accomplishes something (he’s intelligent, a skilled pianist, many things that Julien is not), Julien takes it as a personal offense.  There are rules, you might say, in this world, and they are enemies.

But as they get to know each other, they stop being enemies.  This happens even after Julien discovers that Bonnet’s real name is Kippelstein and that he is Jewish.  Julien is curious about this, but he doesn’t read too much into it because he simply doesn’t understand what it means to be Jewish and why it’s so bad.  Again, they are surrounded by German soldiers, and people speak about Jews maybe not with outright maliciousness, but with a degree of acceptance that this is how the world works.  As one kid later tells Julien, “they’re just Jews,” in reference to how Julien should not mourn them.

Jean is on guard, however.  When Julien lets him know that he knows his secret, Jean responds with physical violence.  He knows how much danger he’s in even if Julien doesn’t.  After a small scuffle, though, the boys start to laugh, somehow bonded by their willingness to fight.

You can draw further comparisons between war and the dynamic between Julien and Jean.  They are enemies at the start, and they fight in the way kids are expected to fight.  But then at a certain point, Julien realizes he doesn’t know why he’s fighting.  He asks his brother and his mother too, when she visits, what’s so bad about being Jewish.  He’s looking into his own behavior, and soon he and Jean are friends.

But their friendship doesn’t last long before the Germans get word that the school is hiding three Jewish students, one of whom is Jean.  The film ends with the kids, and the head of the school, marched out of the courtyard.  Jean looks at them tearfully, and a voice over (I believe the voice of director Louis Malle) explains that Jean and the other students later died in Auschwitz.

The end comes so swiftly, and the final, certain utterance of Jean’s fate is stated so bluntly that it’s as gut wrenching a final moment in film as I’ve seen in a long time.  Combine that with the autobiographic nature of the director, and the story feels frighteningly real.

Au Revoir Les Enfants is a tragedy.  It’s a story about something that grows from nothing and returns to nothing.  There is growth, of course, in Julien’s character.  He cries at the beginning for himself, and he cries at the end for someone else.  This film is a coming of age story, but the final voice over isn’t a Sandlot-esque “that was the best summer of my life,” spiel.  Instead it’s purposefully haunting, suggesting even though Julien has evolved, he is forced to reckon with something that truly makes no sense in the world at this time.  He grows to understand something about himself but not of the world.  If anything it makes less sense than it once did.

“Bonnet, Negus and Dupre died at Auschwitz; Father Jean at Mauthausen. The school reopened its doors in October. More than 40 years have passed, but I’ll remember every second of that January morning until the day I die.”

Another important message from the film comes about halfway through, when the priest delivers his sermon to an audience of children and their visiting parents: “My message today is especially for the youngest among you who will be confirmed in a few weeks. My children, we live in a time of discord and hatred. Lies are all-powerful. Christians kill one another. Those who should guide us betray us instead. More than ever, we must beware of selfishness and indifference. You’re all from wealthy families, some very wealthy. Because you’ve been given much, much will be asked of you.”

So this film, while still being about a specific character, is really about us, who we were and what we are.  It left me with a feeling that while we can certainly grow and evolve as people and as a culture, the wound from the Holocaust is still open.  Some things are just evil, and there’s nothing more to it.  The events in and around World War II, even including the bombs dropped on Hiroshima and Nagasaki are things we have to live with, and maybe the important thing is simply that we choose not to forget about it.