Elisabet Vogler (Liv Ullmann) is an actress who suddenly goes mute, and when nothing is found to be medically wrong with her, she is described as struggling from “crippling apathy.”  Elizabet goes to stay at a beachside house with her nurse, Alma (Bibi Andersson), a young woman who admires Elizabet and observes that they look alike.

The majority of the film takes place in this quiet house, and yet this film feels incredibly jarring, in your face and at times a bit unsettling.  The film starts out with a montage of images, including a nail piercing someone’s palm, a spider, a deer being drained of blood) that seem aimed at making you uncomfortable.  At the very least you know to be on guard because this film might not be playing by the rules that govern most films.

The jarring images and style of editing in the film’s opening five minutes seem to influence the way you perceive the rest of the story.  Elisabet’s silence paints her as a victim at first.  She seems to melt into herself, even wincing at the self-immolation footage and Vietnam war coverage she watches on tv.  She’s frightened and disturbed, and it seems as though we are meant to feel for her.

But pretty quickly her silence starts to feel sinister.  In one moment she carves an apple with a knife while a nurse tells her it’s time to move out of the hospital.  Between the knife, what’s being said and the close ups of each character, I began to expect Elisabet to lash out at this woman, maybe even attacking her.  Her silence, in other words, felt loaded, like a coiled snake that could strike at you in any moment.

In the beach house, Elisabet quickly feels like the character in control even as she is meant to be watched by Nurse Alma.  Elisabet’s silence becomes a source of power, as if she’s a deity, a character who has transcended spoken language and has nothing left to communicate.  Instead she simply listens to Alma, almost like a scientist observing an inferior species.

Alma opens up to her, telling her about a sexual experience she had in her youth in a long monologue, one that is reminiscent of a similarly challenging scene in Jean-Luc Godard’s Weekend (1967).  Later Alma will deliver a letter Elisabet has written to the post office, and when she reads the letter, realizing that Elisabet is sharing what Alma said with the doctor, she gets angry.

Alma is as mad at herself as Elisabet.  She’s meant to be the professional, yet she drank too much and said even more.  She soon clams up as a form of rebellion, and in one scene she allows Elisabet to walk through the courtyard, barefoot, with broken glass in the way.  Alma doesn’t say anything and lets Elisabet step on the glass.

There’s a scene where Alma tries to apologize to Elisabet after she calls her rotten, seemingly the climax to the movie’s plot, but what Bergman seems more interested in is the subtext to their relationship as well as their own identities.  The film draws a fine line between both women, starting with the observance that they look alike, and soon implies that they might be each other.

When Alma is visited by Elisabet’s husband, she insists that she is not who he thinks, but when he keeps on talking, she seems persuaded.  Elisabet walks up to join her, but no one pays attention to her.  It’s at this point that it seems as though Alma might have been Elisabet all along, and that Alma was just a creation in her mind.  But soon we’re back to Alma and Elisabet as themselves.

The film never answers whether or not there is any overlap to their characters, but the point seems to be the malleability of their own personal identities.  Elisabet is an actress, after all, and there is a history of movies finding themes of self-identity within an actor.  What does it mean to be yourself if you’re always pretending to be someone else?

The most important moment of the film, near the end, is when Alma tells Elisabet the story of how and why she broke down.  She explains how Elisabet became pregnant but never wanted the child and so rejected it.  We see the entire scene with the camera pointed at Elisabet, and slowly the shot gets closer and closer to her face.  Then the scene plays out again, and now the camera is pointed at Alma.  Both characters are deeply invested in this moment, and they might as well be the same person, even if they’re not.

Throughout the film, there are shots of the characters talking in extreme close ups and shots of them in which their faces overlap in peculiar ways.  It’s a style of shooting that you might recognize as it has been parodied countless times.  Whenever someone parodies foreign arthouse cinema, Persona seems to be what they are poking fun at.  It’s the same as how Airplane! (1980) seems to be a parody of old action movies but is really just a parody of one specific movie, Zero Hour! (1957).

So Persona focuses on identity and the power of looking.  There are so many shots of the characters’ eyes and a few moments showing a character’s reflection.  The film is about how we see ourselves, possibly in relation to how the world sees us.

To get that idea across, here are a bunch of screenshots from the film: 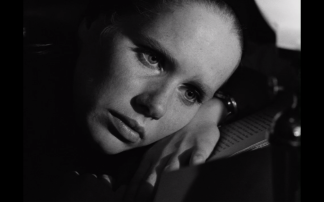 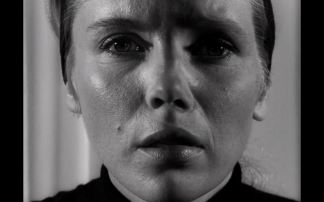 You are forced right into the characters’ faces, and it creates a feeling of vulnerability.  We’re not used to being this consistently close to a character such that we can see every lip quiver and thought that seems to pass through their eyes.  For a quiet movie, Persona is quite intense.

Elisabet and Alma become so intertwined that it’s easy to forget what started this whole journey.  Elisabet’s “crippling apathy” is a response to her feeling of meaninglessness in the world.  Like Max von Sydow’s knight in The Seventh Seal or Isak’s son in Wild Strawberries, she is a character looking for answers and struggling to find any.  Near the midpoint of the film, though, she explains in the letter Alma reads that she is starting to find herself again.

The film highlights her emotional journey, but then the story pivots and seems to become more of a Brian De Palma film (like Raising Cain or Sisters).