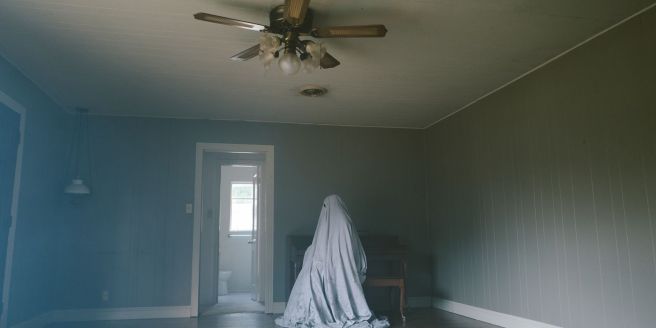 A Ghost Story has to teach you how to watch it.  The film is so quiet, so lingering, so meditative, and it has to show you how to sit with it.  There is no real plot, but there is a point, and it’s all building to something.  In the first 30 to 40 minutes of the film, the scenes are so damn long, so stretched out, and you might find yourself going crazy staring at the same thing for so long.  It’s like when you look at anything too long, and at a certain point you’re not sure what you’re looking at anymore.

This reflects the vantage point of the ghost, a silent, graceful character in a white bed sheet.  The ghost is that of Casey Affleck’s character, a man only named C.  He lives with his Rooney Mara’s M, but it’s not long before he dies in a car accident and wakes up as a ghost.

The point of the story, though, is not their relationship.  This isn’t a love story like the movie Ghost with Patrick Swayze.  This isn’t even like director David Lowery’s last movie with the same lead actors, Aint Them Bodies Saints though going in it’s understandable to think why it might be.  That film is all about Affleck’s character’s desire to return home to his wife, played by Mara.  In A Ghost Story they are separated early on, and then we follow the ghost as he observes Mara, even reaching out in an attempt to comfort her.

But soon Mara moves out of the house, and the ghost stays.  In an earlier scene, the ghost sees another ghost, and they speak in silent subtitles.  The other ghost, we learn, is waiting for someone, but he or she can’t remember whom.  It’s not a stretch to imagine that Affleck’s ghost doesn’t even know why he’s still here.  He just is.

Before Mara moves out of the house, she buries a note in a hole in the wall before painting over it.  This is something she does with every house she lives in, and she tells this to Affleck and to us in the very first scene.  The idea is to leave part of her behind wherever she’s been.

So Affleck’s ghost tries to scratch through the wall to find the note… only this occurs over the course of years.  Before he knows it another family has moved in.  The ghost observes this family and soon acts out in rage, frustrated with being stuck.  The ghost takes on the role of a more traditional, haunting ghost, even levitating a glass of milk in a scene straight out of The Sixth Sense, at least from the family’s perspective.  All they see is the glass and the dishes being flung against the wall, not the person flinging them.

Soon they move out, and in one of the most thematically-relevant scenes, there is a party in the house in which a guy talks about his theory of life.  It’s a scene straight out of Richard Linklater’s Slacker.  A guy talks and people listen.  It might feel like a conversation, but it’s more of a monologue.  The guy discusses time and mortality, how we’ll all die and nothing will live on with enough time.  Maybe there’s a plague of some sort but some people survive.  Maybe one of them remembers a famous tune, suggesting that you can live on past death through your art.  But even that will come to pass.  Eventually the earth will be swallowed whole, and the universe will return to being nothing more than a speck of dust.  Not to again compare something to a Linklater movie, but one of his lines is straight out of Before Midnight.

A Ghost Story: “We build our legacy piece by piece and maybe the whole world will remember you or maybe just a couple of people, but you do what you can to make sure you’re still around after you’re gone.”

Before Midnight: “Like sunlight, sunset, we appear, we disappear. We are so important to some, but we are just passing through.”

The ghost watches this conversation, and though you might expect it to build to something, it doesn’t.  Sure there is a flicker in the lights that catches the guy’s attention telling the story, but there is no sudden intervention or even revelation.  This is just another moment, and before we know it, the house is dilapidated.  What’s left is the ghost, silently chipping away at the wall where Mara hid her note.

He is interrupted when a bulldozer destroys the house, and now we see the ghost standing perfectly still in the spot that used to be his home.  In the next cut he is at the base of a large construction project, meant to be the same exact location.  Soon the skyscraper has been built, and right after that he finds himself on the roof of a shiny skyscraper, surrounded by a foreign-looking city of bright lights and tall buildings.

He throws himself off, and he wakes up in a field that more closely resembles the place of his home.  It’s at this point that you start to wonder where the film is going.  Though we knew the story was jumping further and further into the future, taking greater leaps with each cut, now we wonder if the world has collapsed or if we’re at the beginning of time.

And it seems we are at the beginning of time, following a family that lives off the land and quotes the bible.  The ghost continues to silently observe them, and in one of the most haunting sequences, we see that they have all been killed, shot through with arrows, but like everything in this film, including the ghost’s death, this happens between shots, in the cut.  The ghost shows no discernible reaction as the family lies slaughtered.  In the next cut they are just skeletons, and in the next they have disappeared almost entirely into the ground, time taking its toll.

In the next cut we are looking down at the floor of the kitchen of the house we’ve become so familiar with.  The ghost remains in the same position, and soon we see Affleck and Mara buy the house and start their lives together.  It’s not long after that we catch up to where we were at the beginning of the story, eventually getting to the moment where the ghost first appears.

In this moment we now see the ghost watching himself watching Rooney Mara, the cycle continuing.  It’s at this point that the ghost, realizing that time will continue in a loop unless he finds what he needs to find, finally pulls the note from the wall and disappears.

I don’t know how many shots there are in this film, but I would guess that the average shot length is somewhere around a minute long.  The beginning of the film is so drawn out, the story told in only a handful of cuts.  By making each shot as long as it is, each cut suddenly becomes more and more powerful.  The less cuts there are, the more dramatic each one becomes.  We are so immersed in the moment, but when we cut we often don’t realize how far forward in time we’ve jumped, and neither does the ghost.

There’s one particular shot of a grieving Rooney Mara sitting down on the floor of the kitchen to eat an entire pie before running to the bathroom to throw up.  The ghost silently watches the whole thing, and you probably get a little restless sometime around the halfway point of the shot.  Some might argue that this shot is too long, and that it isn’t necessary to get the point across, but I think it’s very necessary.

The shot makes you sit in near misery watching this action unfold.  The action itself isn’t that gripping, but you’re forced to sit there with it like the ghost is.  We are so eager for camera to cut that when it finally does it’s almost a surprise.  This moment trains us to be on guard for each cut because we have no idea what will come with it.  In a typical movie scene, for example, we can expect a few dozen cuts, so with each cut we’re not surprised by what comes after.  But in a scene like this, the cut becomes something like a magic trick.

As the movie goes on, we learn to not anticipate what will follow the cut.  It could be anything, and the film becomes more powerful and engaging because of it.

Richard Linklater, okay I always bring him up, but his movies are all about time.  He either shrinks it or expands it, as with movies like Slacker and Before Sunrise versus Boyhood and the totality of the Before trilogy.  In an interview he explained how time as a character is such fertile territory for filmmakers.  In the span of one cut, you can show a boy at age 8 and in the next he could be 50.  Granted, that’s something that would be hard to orchestrate if you use the same actor, but the possibility is there.

You can achieve that effect of time passing in a single cut with a house, or with the same location in multiple seasons.  We have the power to capture something and present it in a more condensed version to try and understand the effects of time and to see it in a new way, and that’s what A Ghost Story does.

You can talk about something all you like, like the party guest in the monologue scene of the movie, but it’s more impactful to see it and to feel it, and that’s what this movie tries to get at.

The result, to me, is something quite profound.  I’ve been thinking about this movie a lot since I watched it, and though I don’t have any interest in seeing it again anytime soon (individual moments may be a bit of a slog to get through), it might be my favorite movie of the year.  It’s an experience, I’d say.  It’s not meant to be fun, but it’s meant to sit with you, to get at your core and to make you feel things.  John Wick, for example, is great, but it never made me feel anything.

And A Ghost Story isn’t always what you go to the movie theater to see, but it’s important that you do.  I think this is just as much a movie theater experience as Dunkirk or Gravity or Interstellar or Avatar is.  It’s important to sit in a dark room, your attention devoted to this thing in front of you, no phones, no distraction, no nothing.  It’s important to immerse yourself in something for a bit, whether it’s a movie that requires a certain amount of work put into its viewership, or whether it’s a silent hike, run or walk.  We have so much external stimuli now, things always demanding our attention, and it’s often hard to create something or have the will to create something when you have enough entertainment to occupy the rest of your life.  I subscribe to around 50 podcasts, and I’ll never go through all of them, so it’s easy to, when I have a quiet moment, pop one in and see what it tells me.

The same goes for internet, Netflix, gossip magazines, anything.  But a movie like this is like going to the gym, and you feel so much better for it.  It stretches out your brain like silly puddy and leaves it stretched out for sometime, maybe like the feeling after a long massage.