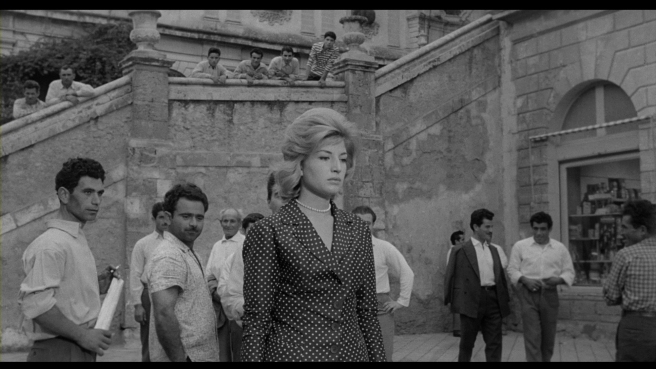 L’Avventura is a film about the people left behind after a woman’s disappearance during a yacht trip.  Even though Anna (Lea Massari) is the one who disappears on a small, rocky island, the remaining characters, Claudia and Sandro feel like the ones stuck behind.  Over the next two hours following her disappearance they try to deal with the ramifications of no longer having her in their lives.  We mostly see this through Claudia’s (Monica Vitti) perspective, as her best friend.

Sandro (Gabriele Ferzetti), Anna’s boyfriend, seems much less distressed over her disappearance.  They haven’t even left the island when Sandro makes a pass at Claudia, one she deflects.  Back on the mainland, though, he continually pursues her, and it’s only a matter of time before she gives in.  In doing so, our perception of Claudia changes before our eyes.  Once she falls prey to Sandro’s charms (which we as the audience have a hard time understanding), Claudia begins to feel like Anna who wasn’t the most thoughtful of characters during her limited screen time.

In the end Claudia laments to a friend that she no longer wants Anna to return as it might mean the end of her relationship with Sandro, something she seems entirely dependent on.  Sandro is like a drug to her.  When she is with him she is hard to define as anything other than Sandro’s girlfriend, much like Anna.  If you take a step back, all romantic entanglements in this film feel like a trap.

Beyond the revolving relationship door between Sandro and Anna, then Claudia, then whichever woman he beds next, every woman in this film is leered at by men on the street.  In one scene a woman stops by the police station with a parade of men following her.  Is she famous?  It doesn’t seem so.  She doesn’t even understand the attention, though she doesn’t object to it.  Later, while Sandro makes a stop somewhere, Claudia is left on her own in a public square, and every man stares her down like a shy zombie.

At the end of the film, Claudia’s biggest moment, aside from the final minute of the film, is to acknowledge that she really doesn’t want her best friend to return home.  She acknowledges that she’s stuck, and that she needs Sandro to herself.  When she soon finds him with another woman, she runs away only for him to pursue once more.  Sandro starts crying, and it doesn’t much matter if it’s authentic or if it’s a power play.  But the music sounds a little more ominous, the type of cue that tells you someone is about to die, and it swells when Claudia runs her hand through his hair.  They are firmly together, but this is no happy reunion.  It cements her descent into a woman trapped by the man next to her.  Perhaps it’s as simple as a statement on the trappings of patriarchy or of life in general.  The moment, though made to be tragic, doesn’t seem an indictment of any decision Claudia has made.  She’s not at fault here, just a victim of circumstance.  It’s the world that has put her in this position and made her dependent on someone as despicable as Sandro.

There is one shot in particular in L’Avventura that got my attention.  It’s a moment when Sandro and Claudia drive off together, possibly for the first time as some sort of couple.  The camera pushes slowly forward down an alley with remarkable serenity.  This film was made in 1960, long before camera dollies were refined.  When a camera tracks in any particular direction, you expect it to tremble a little, particularly over a bumpy cobblestone street as we see here.  Instead the camera glides softly and slowly, and as we go further forward, the shot reveals the image of a cross on a church across the way.  It’s a perfectly designed camera movement choice as it clearly illustrated the subtext of the story.

Is what Sandro and Cluadia are doing immoral?  She thinks so at first.  When Sandro pushes himself on her, she objects because Anna might still be out there.  It’s Sandro whose immorality begins to infect her, and the easiest way to show this visually is to juxtapose their triste with the image of the cross.  If monogamy is associated most directly with anything, isn’t it the cross?

I don’t remember the exact point in the story when this shot occurred, but I wouldn’t be surprised if it was the moment Claudia gave in and, in a sense, gave up.

L’Avventura is a story about a woman’s disappearance, but it has much more interest in the relationships and complicated feelings that arise to fill a void someone might leave behind.  Ann might as well have died when she first disappeared.  Claudia, after all, seems to be in mourning the entire story.

There is also a lot going on in this film that I have yet to grasp.  The film was made my Michelangelo Antonioni, one of the most famous Italian directors, likely, of all time.  He made films as through the late 40s and 50s, but his most well regarded films seem to be in the 60s, including 1966’s Blow Up.

I don’t yet know all about his tendencies or favorite themes, and this is the first of his films I have seen.  In a brief review I read, it was noted that he’s concerned with sexuality, images of people feeling the world around them (literally), and the desire or tendency for us to seek something along the lines of our more animalistic, carnal desires. In a modern world that is most clearly seen through sexual relations, which are, of course, the focus of this film.

L’Avventura feels like an attempt for many of the characters to break through their society’s limits in some way.  The men are all dressed nicely with tucked in shirts and well-groomed haircuts, but they all seem to lust viciously after every woman in the film.  They are just waiting to take off their ties and show what lies beneath.

This is a long film that really tests your patience if you don’t always follow what Antonioni is trying to say, and I often had trouble keeping up with the subtext, but after this viewing and some soon to come follow up reading, I’m eager to watch more of his work.