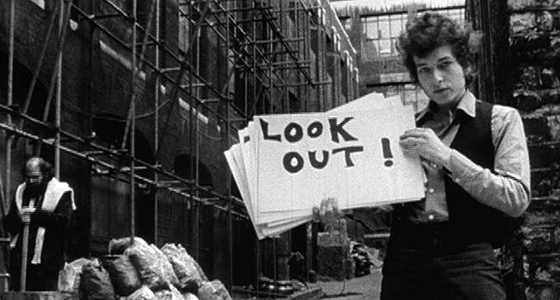 The 1967 New York Times review of this film begins:

“It will be a good joke on us all if, in fifty years or so, Dylan is regarded as a significant figure in English poetry. Not Mr. Thomas, the late Welsh bard, but Bob, the guitar-picking American balladeer. One step toward the latter’s canonization has been taken, in fact, in a full-length documentary, Don’t Look Back, now at the 34th Street East Theater.”

Don’t Look Back is hard to read into, actually.  On the surface it seems like a very fascinating behind the scenes look at young Bob Dylan, his fame and his refusal to pretend to have answers he doesn’t have.  We see him on a tour through England interacting with fans, with his inner circle and manager Albert Grossman, and we see him talk at length with reporters, challenging them in a way that suggests he’s not willing to dole out the same, bland answers but also that he might be a little pompous.

What is pointed out in that New York Times review, and which struck me, is that this whole film could be the image Dylan wanted to be presented to the world.  Maybe he seems to be real, more of a person than a performer, but he’s also still wearing his trademark sunglasses, sitting back and smoking a cigarette or rehearsing a song in a way that feels staged.

Albert Grossman, Dylan’s manager, was a producer of this film, and it could very well be that this documentary was made deliberately not only to capitalize on Dylan’s fame, but to help control his narrative.  That’s why, in several scenes, Dylan exchanges in a vibrant conversation with a few different reporters who are straight-laced, a symbol of the old guard despite their relative age.  When Dylan challenges them, subtly at first and then rather strongly, it feels like he’s championing the rights of the counter culture movement and those who (his fans) identify with it.  This is about our young hero taking down the rigid society around him.

But at some point, Dylan’s words start to feel more aggressive.  Maybe he has a point, but what’s the point of going to such lengths to make his point, one he maintains he’s not trying to make.

In one of these conversations, Dylan pokes holes in a reporter’s profession, pointing out that their job is to make him something he isn’t.  He doesn’t want to be boxed into a corner or labelled something he might not consider himself to be.  The reporter tries to turn the tables on him then, asking Dylan similar questions which he sidesteps by saying that his own questions were never designed to elicit any answers.  They were all rhetorical, in other words.

We occasionally see Dylan perform, but the focus is hardly on his actual music.  This isn’t a concert film.  We instead see how people react to his music, his lyrics, his fame and his image.  In one memorable scene, a reporter dictates his story through a phone with a calm confidence in his words.  It’s quite amazing, I think, to see the words of one man be transferred through the phone to wear they will soon become printed and thus the words of one newspaper which is then disseminated to a larger group of people.  Suddenly one man’s words mean more than just the one man.  The reporter says of Dylan’s performance that he is offering a sermon more than a series of songs but that his message is ultimately lost in the music.  And he does have a point, Dylan’s songs are so lyrically momentous, and the music just seems a backing track to what he has to say.

Still, who are we to say that the audience misses the point?  This reporter, while certainly not antagonistic, seems a symbol of the forces of antagonism that this documentary wants to attack.  And maybe that’s harsh, in fact it probably is.  There is no ill will here, but there is a strong attempt to re-open a conversation that perhaps Dylan thinks has been closed.

When he first arrives in England, we get a sense of what the reporters think of him, and in the end the film culminates with Dylan and Grossman, among others, driving away from the latest performance: “They’re calling you an anarchist… just because you don’t offer any answers.”

And there are no answers, but the documentary shines a light on what people want from their celebrities.  Dylan insists that he’s just a person, someone who picked up a guitar and has the good fortune to have an engaged audience.  Then the focus becomes on the mode of that engagement.

From a personal standpoint, Dylan felt startlingly young to me.  I think of him as a middle-aged man with a peculiar voice, but he’s only around 24 at the time of this documentary.  He’s just a kid, and that explains some of the self-confidence and aggression as well as a couple drunken scenes (after all, he’s young, famous and wealthy), one in which he demands to know who among his hotel room guests threw a bottle out of a window.  Paraphrasing here, but he says, ‘I don’t want to be responsible for any of you “cats.”‘

In another scene, Dylan signs autographs for a few adoring girls.  They explain that Subterranean Homesick Blues (which opens the film), didn’t feel like authentic Bob Dylan.  Their dialogue feels more thorough than what you’d expect between famous musician and adoring teen fan.  This might be a moment meant to showcase how thoughtful and introspective his fans are.  These aren’t the same, loud mobs of fans that followed the Beatles around, even if many of those fans have “moved on” to Dylan.

The point would seem to be that the press should relax.  This isn’t a dangerous counter culture figure, spreading toxic messages to impressionable youth.  This is a man with his own convictions, tapping into a collective conscience that is present and undeniable.  The press, I’d say, are the ones slow to catch up.  They deny that the audience even gets the point, and they try to label Dylan as this or that.

With all that being said, this is a story told from Dylan’s perspective.  He is given room to roam and time to philosophize.  The reporters are the ones who make cameos, and every slight misstep in their judgment of Dylan, due to their limited screen time, is extrapolated to imply a greater issue in the media as a whole.