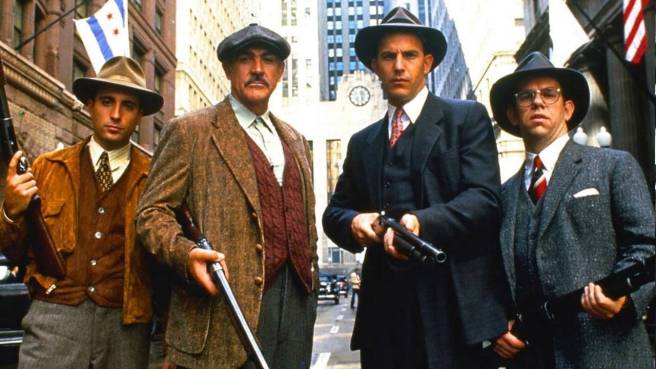 I can’t tell if this film is good or terrible.  I probably only give it as much credit as I do because it’s directed by Brian De Palma.  The film is occasionally melodramatic and often cartoonishly violent, two things that might irritate me in another film, but those qualities are also deeply ingrained in De Palma’s style.  He’s a director with near as much credibility as someone like Scorsese or Coppola, but his style is often that of a B film.

These films require more of a suspension of disbelief, not just for the absurdity of the violence and the characters, but of the premise as a whole.  His films feel like graphic novels, a little over the top, but delightfully fun the entire way.  In something like The Untouchables, it never felt like De Palma looked at this story with any sense of realism.  Though it feels like a Hollywood movie with the handsome hero (Kevin Costner), the grand music, sweeping camera movements and convenient conclusions to complicated problems, you can tell that the whole thing is supposed to be a little hammy.

I got the impression that this was a satire of the Hollywood action movie, but again, I only give it that much credit because of De Palma’s name.  As an ordinary movie the silliness takes away from the story.  Much of the true story of Eliot Ness’ path to taking down Al Capone is rewritten.  Characters who never met do meet, and events that happened years apart (if at all), happen in a very condensed time frame.

Kevin Costner’s Eliot Ness is bland like most of the good guys, each of them playing an archetype more than a real person, but De Niro’s Al Capone was almost out of this world for a movie like this.  He plays Capone with the same intensity as some of his other performances (Taxi Driver, Raging Bull, Casino, even Cape Fear, I guess any Scorsese movie), but it didn’t quite fit with the rest of the film.  De Niro’s villains are often unhinged, capable of anything, but here he feels like a feral cat stuck in a cage.  The film, in other words, was never going to let him go far.

He gets one scene, in fact, where he bashes a guy’s head in with a baseball bat, but it’s the only slightly memorable scene and certainly the only moment that allows the film and De Niro to explore the Capone character.  Otherwise he’s just there to be taken down by Ness.

And there’s never any question that Ness will get him, not just because of the true story on which this is based, but because everything tells you, almost immediately, that this is a traditional Hollywood film with clean act breaks, odd couple pairings, and the good guy taking down the bad guy.  In the middle is where De Palma gets to put his stamp on the film and have some fun.

So that ‘fun,’ in a De Palma picture is often violent.  He puts the camera close to a character as he or she realizes something horrific, and he delights in showing that horror.  In this case it’s a series of blood-spattered walls, like the blood came straight from a waterfall onto the wall.  And Costner has a good face for showing that horror.  He’s a clean-cut, almost too good of a good guy, so there’s something interesting about watching him witness this massacre, like even the actor didn’t realize what he was in store for.

In one of the most memorable sequences, there is a shootout in a train station, a long shootout, and— actually, the shootout itself is not all that long, but the moments before and in between are very long.  What I realized right about now, like I didn’t know this when I started writing, is that I love De Palma’s melodrama.  In this shootout, Ness isn’t just fighting the bad guys.  They’re actually not that hard to handle based on how he mows throws through them and based on how one of the other good guys, a literal accountant, shot down several baddies in a previous set piece.  So the real drama in this scene is the baby carriage that you know will drift down the steps a la The Battleship Potemkin.

Ness and his partner (two other good guys have been killed), Stone (Andy Garcia) scope out the silent station, waiting for the bad guys to arrive.  They need one of them, a bookkeeper, kept alive to use as a witness against Al Capone in court.  But then a frail woman struggles to carry her baby carriage and two suitcases up the stairs.  Ness stares at her for a long time, praying she’ll he’d up the stairs before the bad guys arrive and avoid getting caught in the crossfire.  Why doesn’t he just help her?  Well, he doesn’t because we need the suspense.  Eventually he does help her, but of course the carriage gets just barely to the top of the stairs when bullets start flying, and the carriage begins tumbling down the stairs, much to everyone’s horror.

In a pretty awesome sequence, once you accept the craziness of the situation, Stone literally slides in like a baseball player to catch the carriage which hasn’t tipped over, and Ness fires a few gunshots and people die.  Then there’s one last standoff, and the good guys win.

So much of the drama doesn’t feel that dramatic, which is why this feels like I melodrama, I suppose.  And to be honest, I’m never quite sure what that means.  Sidney Lumet’s final film was 2007’s Before the Devil Knows You’re Dead.  It’s a film that I remember being quite good, and I also recall a quote by Lumet in which he said people look down on melodramas, using the term like it’s a bad thing.  But he thinks the genre has some use if done well.

The Untouchables just feels like a good genre movie, and that genre is melodrama.  People say the same things of other genre movies, whether it’s horror or romantic comedy or a thriller, etc.  Each genre is made clear through the marketing, the trailer, and even that tagline, and so many movies are granted leeway on certain things because those ‘things’ are inherent in the drama.  A later De Palma film, The Black Dahlia is another genre piece, though that genre is a film noir.  It’s almost comical how certain moments near the end of that film are like parodies of the film noir genre.  He’s so immersed in these styles that it blurs the line between camp and satire.

But taking a step back, what is he saying with this movie?  If we accept the melodramatic qualities as part of De Palma’s style, then the melodrama to De Palma is akin to the visual symmetry of a Wes Anderson movie.  Underneath their styles is still a film born from their unique perspectives.  And maybe that’s what makes this movie hard to lock down.  It’s very recognizably De Palma’s work, but the story is so simple that, on a first glance at least, it’s hard to discern what the point is.

Is it just De Palma’s version of a Hollywood story?  It’s one that could be done by any number of directors, like De Palma sculpted his own idea of what someone else’s story should be, rather than De Palma’s style reflecting the central lunacy of a story born from his soul.  Maybe, by bringing the way he visualizes a story to a more conventional Hollywood drama, De Palma’s trying to suggest that there is something a little twisted about the characters we celebrate.

Costner’s Eliot Ness is hardly an anti hero, he’s actually quite idealistic, and even though he willingly kills one of Capone’s henchmen, he mostly abides by the law and takes pride in such behavior.  But perhaps De Palma’s trying to undercut even Ness himself.  Our protagonist is perfect, or we’re supposed to think so, but he gets two of his own men killed, and he’s obsessed with Capone in an unhealthy way.  Is he a little mad but just doesn’t recognize it?  I mean, so many characters in such a conventional drama (by conventional I mean any big budget action movie that aims to make money, not win awards) are more cliche and archetype than human.  These are characters who don’t have to stoop to their enemy’s level to defeat them.  They can win and do it in an honorable fashion.  But the carnage is so bloody, it forces us to evaluate that Ness did descend into some kind of madness, some kind of hell, to defeat this man.

But maybe that’s not the point, it’s just the closest thing to a point I can come up with for The Untouchables.  There is so much that feels so wrong about this movie, but it is a very fun and entertaining movie to watch.  The drama is well-orchestrated, and the horror shines as well.  It’s sadistic and still strives to make you smile, like when the accountant, after one raid, looks both ways before taking a sip of the leaking alcohol which they are fighting to keep off the streets.  The Untouchables is a movie that tries to make you laugh even while it makes you wince.