Like De Palma’s Blow Out (1981), this film is his reworking of a pre-existing tale, in this case the Phantom of the Opera.  In Paradise, a lot happens in act 1 to set up a situation in which a popular rock opera is haunted by a Phantom, Winslow (William Finley).  Winslow wrote the opera which a record tycoon, the Swan (Paul Williams) has stolen and passed off as his own.

Trying to get back at the Swan, Winslow ends up disfigured and broken and believed to be dead.  He tries to torment the Swan’s production of his work, a bastardized version of Winslow’s vision for the project, and in doing so he kills a few of the castmembers with a homemade bomb.  But the Swan isn’t deterred.  He simply brings Winslow into the project, having him write for him in exchange for the casting of Winslow’s desired lead, Phoenix (Jessica Harper), a woman Winslow is in love with.

Winslow, by now the Phantom, and the Swan work together until the Swan gets what he wants, a completed version of the opera.  Once he has that, he locks the Phantom behind a quickly formed brick wall, and he proceeds with the opera in his own vision.  This means using a different singer, named Beef, and going against everything the Phantom hoped to see in this project.

This angers him, of course, and he continues to haunt the project.  First, the opera is loaded with images of death, so when the Phantom electrocutes Beef, no one seems to notice (or care) that a man has just been killed.  His hand forced, the Swan puts Phoenix in the lead role of the performance, appeasing the Phantom.

This makes Phoenix a star, and she sleeps with the Swan, telling him she’s his as long as he can give her that kind of audience every night.  The Phantom, after seeing this, tries to kill himself, but the Swan explains that he can’t kill himself because he’s under contract.

Soon the Phantom learns that the Swan plans on killing Phoenix onstage during the next performance, so he intervenes to prevent the murder, and in the process he himself dies.

Okay, so describing the plot of Phantom of the Paradise feels futile.  There is a lot that happens, and writing about it feels silly.  It’s an extreme movie, an entertaining one, but it’s not meant to be taken too seriously, at least from what I can tell.  This is a film that, like other De Palma works, is loaded with melodrama, hyper-violence and fun.  It’s a movie made with a lot of energy, even if it might be manic energy, and it’s the type of movie you should see with a bunch of friends, a viewing experience similar to the Rocky Horror Picture Show.

I’m not really sure where to even begin with this story.  It’s relatively grounded at the beginning, starting with a performance by a 50s-era pop group, like a scene out of Grease, and that itself is extremely entertaining.  And while much of the movie continues with the same energy of this scene, it’s a story about obsession (De Palma’s next film is called Obsession), passion (he has one called Passion too), the devil, deals with said devil, youth, and pop culture.

The Swan is an enigmatic figure, probably a cross between Andy Warhol and (by today’s standards) Lorne Michaels.  No one knows anything about the Swan, but they love him anyway.  The fans’ obsession with him is presented as a little crazy.  The crowds are put in a frenzy like the crowds that followed around The Beatles or Bob Dylan.

This film was made in 1974, and I have to think that some of the biggest influences were the absurd amounts of fame given to those musical acts as well as the desensitization to violence experienced through televised accounts of the Vietnam War.  The effect, at least in this film, is a frenzied crowd that can’t think for itself or doesn’t care to.  When they see images of death onstage they aren’t fazed, not even when that death becomes actualized.  More than three people die onstage in the final scene, and the film ends with the camera pulling up to the ceiling while the crowd dances all around, like they didn’t see what just happened.

So this film, like so many great and weird films, is much more abstract than the plot given to us.  The plot moves forward with such crazy speed that it feels rushed through, like it doesn’t matter.  What matters more, it seems, are the specific, absurd, grotesque images we’re given in moments that perhaps could mean just as much out of context as they do in the context of the story.

Images that stick out to me include the bomb going off during a rehearsal of a scene that looks like it could be a music video for The Beach Boys.  There’s the image of the Phantom, dressed in Darth Vader-esque black leather, confined to a room covered with computers, writing the play.  There are the many close ups of his eyes, taking joy in the grotesque nature of his appearance as well as in his own tortured soul.  There are the mobs of crowds, the bright blood that never tries to look real, the greased hair of the first band we meet, etc.

Maybe this is like a journey through time and through music.  We meet the innocent, vanilla pop group at the beginning and transition into more challenging, punk type of music by the end.  Except that the band at the beginning, though they sound harmless, are signing a song about death.  The music and the lyrics don’t really match, in other words.

By the end, the visual qualities of the rock opera fully match the contents of the music, like the content was always going to corrupt the performers’ appearance.  Maybe that’s meant to mirror Winslow’s descent from a passionate, oddball guy to something resembling a monster.  Or maybe this is a stretch.

Phantom of the Paradise feels subversive, like this was a film that wasn’t well-received at the time and made parents uncomfortable.  But this also came out at a time when pop culture had already become more challenging.  The Beatles broke up in 1970, and this followed their journey from this: 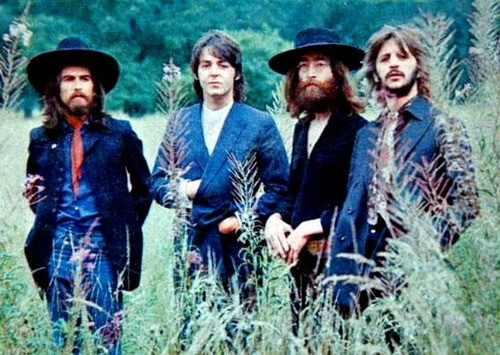 Maybe that’s not the right symbol for this time, but The Beatles were obviously huge in pop culture, and they changed drastically in less than ten years.  To me, their change feels highly symbolic of the change in pop culture values in that same time span.  Then you have the Vietnam war which finally ended in 1975, as well as events like a monk setting himself on fire and the Kent State shootings in 1970.  Oh yeah, and there were all those political assassinations in 1968.

It was a rough time, the late 60s, and Phantom of the Paradise, like many works of art, feels like a reaction to that time.  It’s at least a commentary on our relationship to art at the time, how we take it in, how we think about it and how it controls us.  Or, I don’t know, but that’s the impression I got.  The final image of the audience dancing despite the massacre onstage feels biting, like we’re being forced to look at ourselves and our role in the problem.