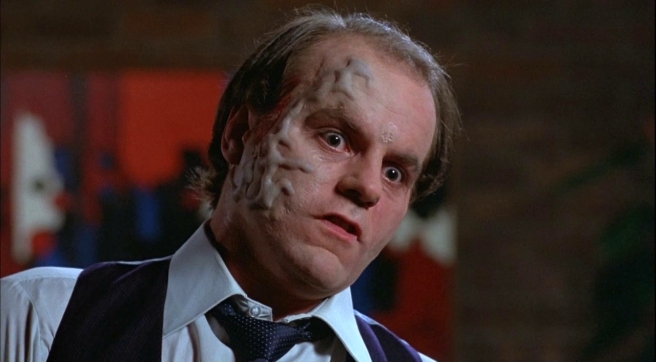 What makes a movie good?  I think I’ve enjoyed so many of the movies I’ve written about on here, but Scanners, like so many of them, is one I have no interest in seeing again, and yet I appreciate a movie like this.  It’s weird, gross, silly and full of occasionally bad acting, but it feels important.  It’s definitely reflective of David Cronenberg’s directorial tendencies (similar to his 1984 film The Fly), and watching a film like this seems to shine just a little more light on a certain director as well as that era of filmmaking.

The music, the practical effects, the hamminess of this story feels like it’s ingrained in the films of the eighties meaning that Scanners, for better or for worse, is of its time.  It’s the same way you might watch a movie like… Grosse Pointe Blank, a 1997 John Cusack movie that is quite enjoyable but just so very 90’s.

It’s like going through an art exhibit.  You might not like a particular piece, but after spending an hour or five strolling through the museum, you feel like you’ve learned something about the nature of the exhibit, whether it’s all the work of a single mind or of a specific time and place.  You could put together an exhibit about the films of the 80s, and a movie like this would be there.

But Scanners, as much as it is an eighties movie, is also a Cronenberg movie.  He’s a director known for his twisted visuals, usually involving some kind of body horror.  The most notable example, to me, is The Fly which is all about one man’s descent into madness both physically and mentally.  That man is played by a handsome Jeff Goldblum, and the story delights in his severe fall from grace.  Everything looks to be perfect in his world early in the story, and then it just gets worse and worse, each pitfall trying to outdo the last one.

I haven’t seen many of his other movies except for two relatively recent entires, 2005’s A History of Violence and 2007’s Eastern Promises.  Both of those movies feel more restrained compared to what I know of his early career, but they both delight in violent set pieces, often made more violent by how much they contrast with what came before.  In A History of Violence, Viggo Mortensen plays a quiet, calm family man in picturesque small town America, the type of place a Presidential candidate will visit to sit and talk with the locals in a coffee shop before the primaries.  But soon Ed Harris comes to town, and all hell breaks loose, and we learn that Viggo is quiet the assassin.  In that movie, Cronenberg spends as much time and effort establishing the postcard perfection of the small town before he delves into the violence.

But what does that mean or say about a film like Scanners.  There are some delightfully twisted and stomach-turning sequences in this film, but for the most part it’s a little slow, certainly predictable and weighed down by cliche-driven storytelling and slightly horrendous acting.

The film is one of those very familiar ‘call to adventure’ stories, much like Harry Potter, Star Wars, Star Trek, The Matrix, etc.  Granted, Scanners came out a couple decades before most of these stories (save for Star Wars), so it’s possible that the story structure wasn’t as worn out back then.  But Cronenberg’s reliance on this conventional type of story feels familiar to his reliance on a certain amount of melodrama in A History of Violence.  His films, from what I can tell, aren’t trying to challenge you from start to finish.  Instead they lure you in by offering you something familiar or something pleasant before unleashing something vaguely nightmarish.

In Scanners this starts pretty early.  We follow Cameron Vale (Stephen Lack), a vagabond type of dude who, from the look of things, has been struggling everyday of his life.  We see what he can do with his telekinetic powers pretty early, as he seems to induce a seizure in another woman before he is taken in by some mysterious men.

Cameron meets Dr. Paul Ruth (Patrick McGoohan) who offers us all the exposition, basically.  He tells Cameron that there are others like him, and there is a villain, Darryl Revok (Michael Ironside), who is trying to ruin their organization.  So Revok is Voldemore/Darth Vader/Khan/Agent Smith (was he the Matrix bad guy?), and it falls to Cameron, the new guy, to defeat him.

Through a series of events, Cameron gets closer to Revok, and of course there’s the love interest with whom he crosses paths.  Everything builds until the final confrontation between Cameron and Revok, and everything before that meeting feels unnecessary and pre-ordained.  Cronenberg isn’t reinventing the wheel, he’s just painting it his own way.

There are some tremendously flashy sequences involving a series of explosions when one of the bad guy’s orders a technician to self-destruct a computer into which Cameron is hacking using his telekinesis.  This starts a chain reaction in which even the phone Cameron uses to access the computer begins smoking, then spewing liquid before finally blowing up.

It’s a long scene, made even longer because it seems like Cronenberg wanted to use every explosion and every filmed angle of those explosions as if to get his money’s worth.  A lot of movies in this time period seem to do that, where they show an explosion or a cool stunt from multiple angles, even if it means we see the same split-second moment multiple times.  It becomes about the spectacle more than the story, but the best parts of Scanners are about the spectacle.

Early in the film, the villain blows a guy’s head up with his mind.  It’s gory and hilarious, but still unsettling.  In the scene, Revok uses his mind to get into the other guy’s, and their intense expressions along with the music make it seem like your own head will explode along with this poor guy.  The same style comes in during the final, climactic battle between Cameron and Revok.

They have a short conversation in which Revok reveals that they’re brothers, and he tries to lure him over to his side.  Just like the other ‘call to adventure’ stories, the new guy, our hero, proves to have some deeper connection to the story.  But then they fight, and damn it’s hard to watch.  They try to get into each others’ minds, and Cronenberg somehow achieved this practical effect where each man’s veins start bulging down their arms, even leaking blood, before the same happens to their faces.  I have no idea how he did this.  It’s not like the veins were bulging between cuts, but we actually see the vein swell up, seeing the liquid pulse down his arms.  Jeeze it’s grotesque.

It’s the most horrifying but also Cronenberg-esque moment of the story.  Eventually Cameron dies, but we’re led to believe that maybe he took over Revok’s body, having taken over his mind.  It seems a little unbelievable, even for a story as ridiculous and over the top of this.

There is another story here too.  Revok tells Cameron that the agency he works for has been giving a drug called ephemerol to pregnant women because one of the drug’s side effects is to make the unborn child a ‘scanner,’ like them.  He goes on to tell him that they were the first unborn children on whom this was tested.

Scanners feels conventional on the surface, but it’s a visually-striking movie where the greatest impact is on an individual level.  It’s a story that’s large in scope, about secret agencies and hidden powers, but the lasting image is of a charred corpse and a woman’s horrified reaction.  Those other ‘call to action’ movies I mentioned, they all seem to end with large gatherings.  Our entry point into the movie universe is through our protagonist, the hero, and by the end he is accepted and praised.  The ends of those movies seem to be some kind of wish fulfillment.  We all identify with the hero as a beaten down, disrespected guy (or kid) who has a secret talent.  We all probably think we have some kind of secret, special skill we’re just waiting to unleash, and through Luke or Harry or Neo we get to indulge in this fantasy.

They enter a world which, through increasing challenges and over the top villains, brings out the best of them so that at the end, everyone knows who they really are.  Harry Potter ends with a school assembly, everyone in one place, and Star Wars ends with the heroes all getting medals and a standing ovation.  But Scanners ends with the hero’s death, and though we’re given some reason to believe he’s still alive, the most striking image is of his dead body.

The world of Scanners doesn’t bring out the best in Cameron, it breaks him.  It shows that he does have a hidden purpose, but it’s one he’d be better off without.  Not every call to action will save you.