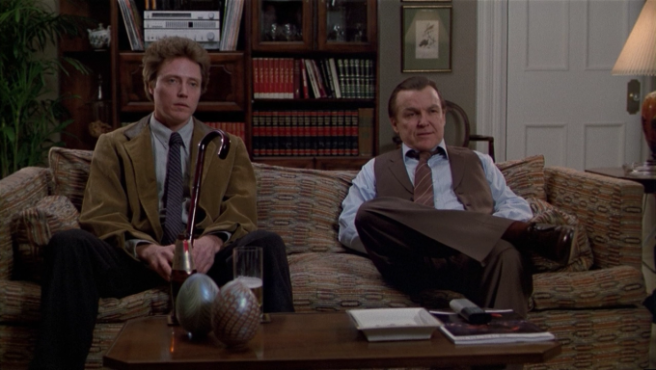 The Dead Zone has no sense of urgency.  It’s a story about a guy, Johnny Smith (Christopher Walken) who falls into a come for five years, then wakes up with psychic powers, able to see visions of the past, present and future.  After we establish his powers, we’re left without a goal for the protagonist.  Johnny has a woman he once loved, but there’s nothing he can do to get her back.  He has nothing he longs for, just this irritating ability which begins to corrupt his body and make him miserable.

Instead of one through line, Johnny goes on a couple different adventures which play out like different episodes of a tv show.  It makes sense that this story, an adaptation of a Stephen King novel, was later turned into a show that ran for five years.  There is more work and intrigue put into Johnny’s journey to becoming a psychic, but then it feels like he has nowhere to go once he’s there.

After discovering his powers, Johnny is compelled to help the police catch a serial killer.  Johnny visits the dead, holds their hand, and suddenly he can see the last moments of their lives.  You might expect this to lead to a showdown between Johnny and the killer at the end of the film, but instead they promptly find the killer, another police officer, and they corner him at his house where he kills himself in a violent, odd way (i.e. the Cronenberg Way).

Then Johnny starts to wander again, and eventually the former teacher returns to teaching, tutoring a young boy with whom he develops a bit of fondness.  When the boy’s father organizes a hockey practice on a frozen lake, Johnny holds the boy’s hand and sees that he will fall through the ice and drown.  Johnny implores the boy’s father not to let him go, but the dad is an asshole, and he organizes the practice anyway.  The boy doesn’t play, listening to Johnny, and Johnny’s vision comes true once again.

But this moment does serve to teach Johnny that he can change the future.  Later he shakes the hand of Greg Stillson (Martin Sheen), a man running for Senate and likely to win the seat, and he sees a nightmarish vision of Stillson, off his rocker, ordering a missile strike which will take thousands of lives and lead to an unnecessary war.  In this vision, it’s not just that Stillson is making a mistake, but he’s doing it with the violent fervor of a cartoon villain.

Johnny decides he must assassinate Stillson, but this proves to be more difficult when the woman he has always loved since before his coma, Sarah (Brooke Adams), is asked to appear onstage with Stillson who wants to use her child as good publicity in his photographs.  Johnny aims the gun, Sarah calls out to him to stop, and Johnny’s bullet misses.  Then Stillson, made out to be truly despicable, grabs her child to hold up as a human shield.

Johnny doesn’t get another shot off, and he’s shot in the process.  As he lays dying, Stillson angrily jumps on top of him, and Stillson grabs his hand where he envisions a future in which Stillson loses the election because of the photo of him holding up the child as a shield, and Stillson is seen committing suicide.  Johnny smiles, tells him he’s finished, and after Sarah tells him she loves him, he dies.

So this is a very silly movie.  It’s a fun movie, but very silly.  It’s melodramatic, to be sure, but it goes a step further, dealing only in absolutes.  First of all, Johnny developing psychic powers is sensational, but sometimes when you have one sensational thing, it’s enough.  But then Johnny has to help out on an unsolved serial killer case which is sensational thing number two, and since it has no connection to the first sensational component of the story, it’s already starting to feel silly.

Put it this way, Johnny’s new life, with his psychic powers, is THE story.  Everything that comes after should be a product of the consequences of this new ability.  I suppose the through line is Johnny’s difficulty adapting to his ability, but his feelings are never consistent.  And the serial killer story is mostly beside the point because even when Johnny succeeds in catching the killer, he’s still a mess.

Then it’s like everyone Johnny shakes hands with has some violent future ahead of them, which he needs to fix.  What are the odds someone is so surrounded by death?  First it’s the kid who just so happens to be about to die in a tragic, unlikely accident, and then it’s Stillson who turns out to not just have shades of bad guy-ness, but instead is an outright villain, like the kid’s dad.

The film doesn’t pose much of a moral question for Johnny, even though it thinks it does.  We’re shown that everyone he comes up against, who doesn’t side with him, is not just evil but an asshole too.  They are easy to hate, but these absolutes dilute our investment in Johnny’s decision-making process.

Now, maybe there’s something to be said about the fact that Johnny just so happens to live in a town with so much violence and so many people who seem destined to succumb to that violence.  Johnny himself fell into a coma because of an extremely unlikely accident in which a truck overturned on a quiet backcountry road that doesn’t seem like it would have too many semis driving through in the middle of the night.  With this idea, that the violence hides under the surface, it makes The Dead Zone feel more like Blue Velvet.  This is a calm setting with some true horror hiding in the depths.

Stephen King’s stories often deal with fear, dread and intensely violent characters.  Cronenberg seems like a strong companion director for one of King’s stories because they both have an affinity for violent spectacles.  King’s best work, in my opinion, comes in the buildup before such spectacles.  He creates evil characters and characters who you just want to see get their comeuppance, and while his climactic scenes never feel as strong, they’re rewarding because of the work put into getting us there.  Cronenberg, on the other hand, seems to be all about the climax, at least at this stage of his career.

In The Fly, everything seemed to be built around the inevitable horror of Jeff Goldblum’s final transformation, and in Scanners, the best part of the movie is a gruesome, stomach-turning battle between two men with telekinesis who literally use their minds to pick each other apart, kind of like the bathroom scene in Poltergeist.

I think The Dead Zone is a well-made movie but a weak screenplay.  I have no doubt that King’s story was better, with more time up front to establish characters who play one note in the movie, but I found myself caring for Johnny and his struggle.  I was right there with him, curious to know more about his psychic powers as he discovered them.  By the end, though, I was off the ride.  The final scene, an assassination attempt in a small auditorium that only seems to be that small because of budget reasons (pure speculation), I was already taken out of the story.  The escalation feels forced, and Johnny’s death, as well as Sarah telling him she loves him after he tried to kill a politician, feels unearned.

The Dead Zone is about the B-movie aspects of its story, the intrigue at the start and the occasional set piece, but there’s no earned resolution which almost doesn’t seem to matter because so many of the characters, including Johnny himself to an extent, don’t matter.  Johnny dies and you shrug your shoulders and say okay.