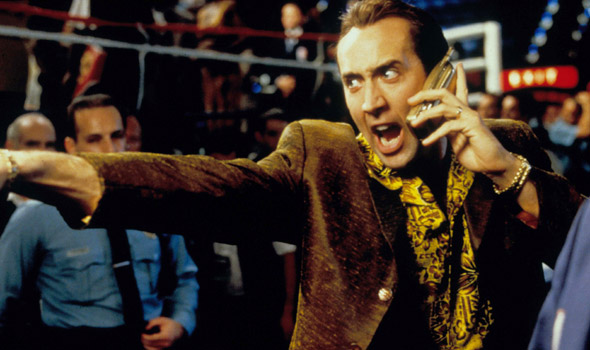 At this point in his career, three of Nicolas Cage’s previous four films involved: a group of ex-military men threatening to release nerve gas in San Francisco, a flight in which prisoners hijack the plane and a man switching faces with his mortal enemy.

Cage, in other words, is coming off a run of over the top movies in which he plays an over the top character, and a Brian De Palma movie is perfect for this type of performance.  In Snake Eyes Cage plays Rick Santoro, a sleazy Atlantic City cop.  He knows everyone, and he has his hands in everything.  The story here takes place over the course of a stormy night in an arena during a boxing match which only matters because of the money changing hands around the ring.

When the fighter Rick bet on to win falls, he gets a mysterious call, and suddenly the visiting Defense Secretary (why is he at a boxing match?) is assassinated, the arena and joint casino go on lockdown while Rick investigates the murder.

Through a series of replays of the assassination from different points of view, as Rick questions each of the important characters, we slowly unravel the ever-thickening plot, a web of conspiracies in which everyone seems involved.  Well, everyone except Rick, of course.  Even as a sleazy, womanizing, unfaithful, crass guy, Rick takes this mystery seriously, even when the shooter seems to have been shot and killed almost instantly following the assassination.  Rick, we learn, sees this as an opportunity to take a stand and prove himself a capable man of the law.

There are a series of misdirections and twists, with characters suddenly revealing their true nature and true loyalties.  One of the boxers threw the fight, and later we learn why.  Like most conspiracy thrillers, the real reason for all this chaos involves a complicated, MacGuffin-esque plot to prevent the Defense Secretary from… well, it doesn’t really matter.  The point is that there is a cover up, and a series of lies and murders that escalate from this cover up.

Maybe in the first incarnation of this type of story, many decades ago, the reason for the cover up mattered, but Snake Eyes is almost a parody of this conspiracy type of movie.  De Palma already made a film like this with 1981’s Blow Out, itself a sort of reconstruction of Antonioni’s Blow-Up (1966).  As with many De Palma films, he takes something we’ve already seen, even an existing property like Blow-Up or Phantom of the Opera, and twists it in his own way.

With Snake Eyes, we recognize the type of story we’re watching, and we have a sense of how the deceit and twists will play out.  When the assassin is shot instantly after shooting the Defense Secretary, we know that there are more layers to this story.  De Palma never tries to surprise us with the subsequent twists, instead he seems to delight in their inevitability.

The joy is not so much in revealing these twists to the audience, but to Rick himself.  And this movie doesn’t work without Rick, the manic, crazy, absurd protagonist.  Cage plays him with as much reckless energy as he does Caster Troy/Sean Archer.  He might as well be coked up out of his mind, and frankly he could be.  Rick’s attempts to straighten out and do the right thing, even when he learns that his best friend is part of the cover up, are admirable, but they’re played out more like a joke.  Isn’t it funny that this guy thinks he’s important enough to do the right thing?

The movie ends with a joke, probably the funniest in the whole movie.  Rick comes out as the hero, just so you know, and he is hailed as a hero by everyone, in comical fashion.  Before this he gets beaten up, also in comically over the top fashion, and his triumph is just as silly, with him being awarded a medal by the city and raising it over his head like a heavyweight championship belt.

Just as quickly, though, we see that Rick’s seedy past catches up to him.  His newfound fame brings with it extra scrutiny, prying into his past and exposing all his flaws which were suggested in the first ten minutes of the story.  It’s silly but genuinely funny, a sign that the film recognizes its protagonists glaring shortcomings.  As much as Rick wants to be the hero, and his heroic growth reflects similar character arcs in action movies (the disgruntled father winning back his family, for example), we’re reminded that he’s still that same sleaze-ball from the start of the film.

All of De Palma’s films contain some amount of humor, simply because they’re so over the top.  You have to buy into the story absolutely or recognize and find joy in the absurdity of the characters, the scenarios and the gore.  When Rick gets beaten up in Snake Eyes, he isn’t just beaten up, he’s absolutely pulverized, by a professional boxer no less.  Everything happens to the extreme.

Where another director might want to make a point in the subtleties and nuances of a performance or situation, De Palma finds meaning in the extremes.  It might not be about what the character is thinking as much as how far he is willing to go.  One of his films is even called Obsession, a reworking of Hitchcock’s Vertigo, and in Blow Out, his protagonist, played by John Travolta, is as motivated as Cage’s Rick Santoro.

His characters are unhinged.  It’s like they’ve worn shackles their entire lives, and when the plot begins, they’re finally free.  Then we see why they’ve been shackled and perhaps why they should be shackled.  The most iconographic moments from De Palma’s career are full of violence, I’d say.  there’s the fatal shootout, of epic proportions, in Scarface as well as the car careening off the road in Blow Out, the assassination onstage during a play in Phantom of the Paradise, an astronaut spinning so fast his limbs literally pop off in Mission to Mars, the quick murder of Ethan Hunt’s entire team at the beginning of Mission Impossible, and, oh yeah, the entire prom scene in Carrie.

Snake Eyes is a little different than the other De Palma movies I’ve seen, mainly in the way the camera is used.  For each of the flashback scenes, showing the assassination from a different vantage point, the camera reflects the first-person perspective of each new character.  We see the world through their eyes, exactly the way they see it.  Then, in one tremendous shot, the camera looks down on a hotel room from directly above before gliding over a series of rooms, offering a glimpse of the different stories unfolding in each room.  The camera, in the first instance, positions us inside the character’s mind, looking out at the world from within, and the camera in this latter instance positions us as the voyeur, looking within a person from the outside.

The beginning of the film begins with a long shot, meant to look like an unbroken take for ten or so minutes.  Though there are some hidden cuts, it’s an impressive shot, well-choreographed, that moves through the tunnels under the arena, like the gutter below a street.  This is the hidden world in which Rick traffics, the roads of his grimy, sweaty, sleazy kingdom.

So the camera work feels more inventive here, at least from what I remember compared to De Palma’s past works.  In each scene, these new visual tricks have a different effect and a different purpose.  The camera is free-floating, in a sense omniscient, reflecting the inner world of a character as well as the outer world.  We learn information before Rick does, and part of the delight is watching him react to these sudden changes, like he’s a lab rat, confined to the cage of the Atlantic City arena, and we’re the scientists taking notes.