Vivre Sa Vie ends with one of the funniest deaths I’ve seen in a long time.  It’s so unsentimental in its depiction of this death, just a quiet cut to black with the text “fin” telling you this is all you get, that you kind of have to laugh.

Godard isn’t going to work too hard to really make you feel anything for Nana Kleinfrankenheim (Anna Karina) when she dies.  It doesn’t seem to matter much how we feel because the scene, and the film as a whole, is so blunt and straightforward that you’re meant to try to understand what’s being said rather than to feel it.

Godard may have purposefully tried to ‘alienate’ the audience, from what I’ve read.  Like in a Robert Bresson film, the characters convey little emotion, and sometimes the camera hides so that you have an obstructed view of the scene, preventing you from seeing any of the emotion that might not yet have been washed away from the scene.  When something happens in the story which might typically make a character react with any degree of sadness, we simply don’t see that sadness.

The film is split up into twelve chapters, each with its own, slightly long title.  In the first of these we meet Nana in a bar, discussing the end of a relationship with her husband.  The camera never shows her face, instead remaining right behind her head.  We have to work a little bit harder to figure out how she feels and what she means, even when the language can get a little heavy-handed. 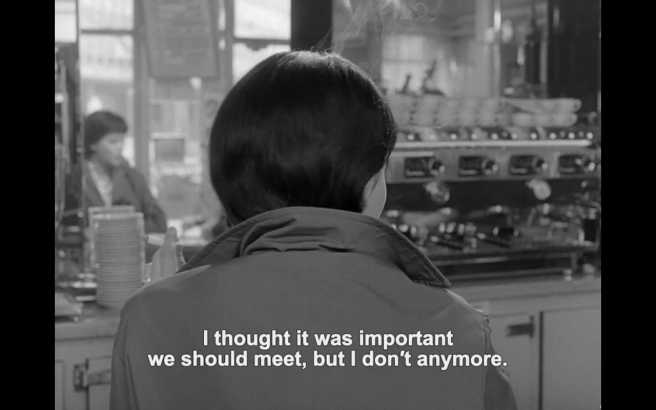 Later she goes on to talk about death, the first of several allusions to mortality.

Nana wants to become an actress, but pretty quickly that doesn’t appear to be an option, so instead she becomes a prostitute.  Rather than sympathize with her plight, the film presents this journey with relative levity.  We watch a montage of men coming into her bedroom, and we see her work towards this new profession as if its any other.

Ultimately she is increasingly mistreated, and in a stand off in which she is literally being handed back and forth like property, Nana is shot by both sides and left dead in the street, a similar ending to Godard’s Breathless (1960).

Godard’s approach to Vivre Sa Vie is, I suppose, follows playwright Bertolt Brecht’s idea of ‘Epic Theatre,’ which “proposed that a play should not cause the spectator to identify emotionally with the characters or action before him or her, but should instead provoke rational self-reflection and a critical view of the action on the stage. Brecht thought that the experience of a climactic catharsis of emotion left an audience complacent. Instead, he wanted his audiences to adopt a critical perspective in order to recognize social injustice and exploitation and to be moved to go forth from the theatre and effect change in the world outside.”

This film is like a sort of case study, showing the cruel carelessness of the world.  We watch a woman’s dreams be shaped into something darker before it leads her to death.  It’s almost a straight line down,  kind of like you’re watching a Planet Earth segment on infanticide.

Godard’s stylistic approach varies a little from Breathless.  While the effect is similar (alienation from the protagonist), he seems to focus more on the camera work whereas the emphasis was on the jarring editing rhythm of that earlier film.  Godard’s camera dollies a lot more here.  The camera movements are more choreographed with careful movements.  In Breathless, the camera was mostly handheld and seemed to move only to keep up with the actors.

But in some scenes the camera moves precisely through the entire set, with a more stable dolly left and right, a type of shot he would use much more in films like Weekend (1967) and Tout va bien (1972), in which the camera would slowly move one direction or the other for minutes at a time.

Vivre Sa Vie, like Breathless, has a strong voice, but it’s made with the passion and restlessness of a filmmaker still throwing ideas against the wall.  Godard seems to know what he wants to say about the world (that last shot is anything but tepid), but he doesn’t yet know or even care how to show it.  It’s like he knows he can get the point across through the emotionless performances of the actors.  The way he shoots, lights and edits those performances is just something a little extra, something to continue challenging the standard construction of a movie, as if to make sure neither he nor the art form ever gets too stale.