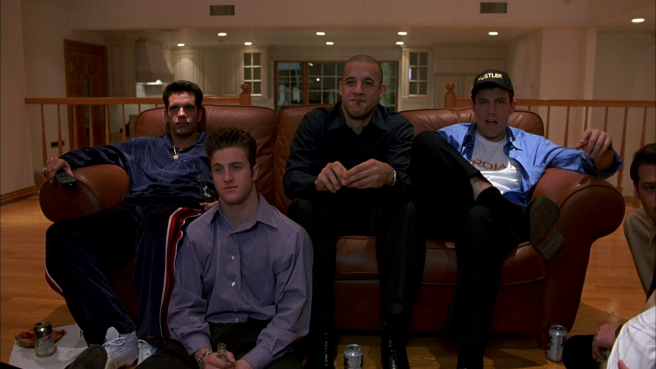 Boiler Room follows the template of other financial broker makes it big through unsavory means stories.  It’s predictable, with the rise and fall customary of the genre and of gangster films as well.  Watching this movie, particularly the scene when the ensemble cast of characters watch the movie Wall Street on tv, I was reminded of the way characters in The Sopranos would speak so glowingly of The Godfather, letting the genre reflect back on itself.

In gangster films like Mean Streets, The Godfather, The Untouchables, Goodfellas, Casino or Scarface and a show like The Sopranos, the world of the story feels as isolated from our own as a fantasy or sci-fi story.  Sure, you’ve heard about real people like Al Capone or more modern gangsters, but I can’t really think of any modern figures.  They’re real, but they don’t feel real.  So when The Sopranos specifically references The Godfather, it’s a bit jarring, reminding you that these are real people in the ‘real’ world.

A movie like Boiler Room doesn’t have that same ‘unreal’ feeling.  That’s because men like the characters in this movie or Wall Street or The Wolf of Wall Street look like people you’ve seen on the street.  Maybe their hair is a little more slicked back, their strut a little more strutty and their ego a little more inflated, but they look like real people.  Still, the world of a movie like this is just as foreign as a gangster movie.  The characters in Boiler Room operated under a different set of rules as our protagonist Seth (Giovanni Ribisi) observes.

Seth, beyond just being the protagonist, is the audience surrogate.  The world of the financial broker is as foreign to him as it is to us.  Through a sometimes painfully awkward narration, Seth describes how strange this world is.  Even though he gets caught up in it, we’re told that he’s different than the rest of these guys, and that’s because we’re meant to identify with Seth, which is where the movie, I’d argue (and I am arguing, I guess) breaks down.

A movie like this or a gangster movie is all about the corruption of the soul.  Goodfellas glorifies the gangster lifestyle from the start, showing how much of yourself you need to get rid of to succeed, and a movie like The Godfather shows the transformation of Al Pacino’s character from an upstanding citizen to a man spiraling downward, into the family business.

Boiler Room, ostensibly, takes a nice kid like Seth and transforms and molds him into this money-hungry guy.  As Ben Affleck’s character says in a famous (but not as famous as Glengarry Glen Ross) speech, this firm molds its own brokers.  They have to come in green in order to be remade the way the firm wants, so Seth, basically, is the perfect candidate.

And of course he succeeds in the profession, though there are some unimportant and unnecessary squabbles with his boss (played by Nicky Katt who I think is an awesome character actor both here and in Linklater’s SubUrbia, also with Ribisi).  Katt’s character and Seth feud over an affection for the same woman, a love interest which serves little to no point in the story.

There’s also a whole thing about Seth’s father issues, which again feels unnecessary to the story.  The point I’m making is that this movie wants to show us how someone like Seth, or your or me, can be just as warped and deformed by this money-hungry power lust, and yet the movie wants Seth to be the awesome everyman hero.  When the FBI arrests him, they say they’re targeting him because he’s smarter than everyone else.  But why?  Why is Seth smarter?

When we meet him he’s running an illegal casino out of his house, and that’s about all we know about him.  We know nothing about where the other junior brokers come from, and why is there money-hunger worse than Seth’s?  He’s doing this too, taking advantage of unsuspecting clients in the name of buying a nice car for himself.

Seth is no better than the men he works with, but the movie insists he’s superior.  When the movie ends, Seth has told the FBI everything in exchange for his own immunity.  He takes down the firm and leaves with no ill effect, and I’m not sure how we’re supposed to feel.

But by making Seth so perfect, I found that I cared less about him.  Sure, he does the right thing and demonstrates that he cares about one of his less fortunate clients, but it doesn’t quite fit with his character.  The only reason it kind of works, it think, is because of Ribisi as a performer.  He’s a wonderful actor who plays characters often at the fringe of society, from what I can recall, and who are their own worst enemy.  In SubUrbia, he plays a burnout who loiters in front of the same convenience store every night wondering why his life hasn’t amounted to anything, taking no responsibility the actions which have left him there.

In Boiler Room he seems to play a similar character, but he’s reduced to an archetype.  Everything about him boils down to a childhood memory and a strained relationship with his father.  Maybe the movie is satirizing wall street, suggesting that every broker, with their fancy suit, fast car and implied coke problem, has only been morphed into this bastardized image of capitalism because of daddy issues.

I don’t know.  But a movie like this, again, like a gangster movie, lives on wish fulfillment.  No matter who you are, there’s probably some part of you that wants what these characters have.  Even if you wouldn’t spend the money the same way, you want the money.  And beyond that, these characters have a sometimes vulgar and repressive but still friendly camaraderie, and that’s always a little enviable.

They matter within their world, in other words, and that’s something we all hope for, no matter what our version of that world may be.  But a movie like this also has the fall, and there’s no getting around it.  The fall, though, can be just as enjoyable as the rise depending on the characters we’re observing.

In some other versions of this movie, we know that the main characters need to crash and burn considering what we’ve seen them through, but Boiler Room tries to make us root against the fall.  We want Seth to get away no strings attached so he can prove to his father how awesome we’re meant to think he is.

Boiler Room is a fun movie with a few fun scenes and a bunch of talented actors playing around with the role of slightly varied loud, obnoxious pseudo-psychopaths.  Vin Diesel has the most fun, it seems, but the movie works too hard to give Seth a way out of this mess when he should go down with the ship because of his active involvement in their crimes.

The movie is about how money can corrupt anyone, and yet our hero turns out to be incorruptible.  The father and girlfriend relationships are laden with cliches, and a better version of this movie is The Wolf of Wall Street where the romance element of the story was very much an extension of the shallow, vain lifestyle perpetuated throughout the movie.  Leo’s marriage to Margot Robbie is meant to be more of the same, when it comes to his characterization in the movie.  The relationship isn’t a breath of fresh air from the rest of the story, it’s buried in the same rotting ground.  Boiler Room just tries to give us too many breaths of fresh air in a story that shouldn’t have any.  This is a fast-paced, drug-fueled world of greed that doesn’t move as fast as it should.