In The Day the Earth Stood Still, a Christ-like figure visits Earth with a grave message: Stop killing each other or the world is doomed.  And really, that should just be the message for every movie, right?  I mean, if you really break it down, whether a story is about greed, lust, racism, anger, sadness or anything, it’s about us picking apart each other.

A movie is typically built on conflict.  You need conflict to have a story, typically, and the idea is that in the end that conflict is resolved, whether because one side wins or because of a compromise made to alleviate both sides.  But even a compromise is really just postponing the inevitable.  Like a broken cease fire, the two warring sides resume fighting until one side wins.  Just think of all the movie franchises currently in production.  You have the good guy who beats the bad guy… until there’s yet another threat in the sequel and then the sequel after that.  I mean, in the Marvel universe, there are so many threats, so many villains, and at a certain point the franchise has to become self-aware, acknowledging the endless flood of antagonists.  When a franchise gets to this point, as in The Dark Knight or some of the Marvel movies (they must’ve addressed it by now), the reasoning tends to be that the large, bold force represented by the Avengers creates the world in which the villains will rise up.  It’s because of the Avengers, basically, that there are villains like Loki or… well, the other villains.

So the point is that movies are built on conflict.  Some people say that every war movie is truly antiwar (except for Mel Gibson’s movies), and some say that every way movie inherently glorifies war.  Regardless of what you think, it’s pretty clear that war movies attract audiences.  Whether they crucify war (maybe something like Saving Private Ryan) or focus on celebrating our soldiers (American Sniper), war movies are dramatic, showy and generally financially successful.

The Day the Earth Stood Still side steps the spectacle, for the most part, and focuses on a  very clear message.  From the poster and the tagline, you might expect something like a B movie that emphasizes the violence, the special effects, and the sensationalism of a King Kong movie. 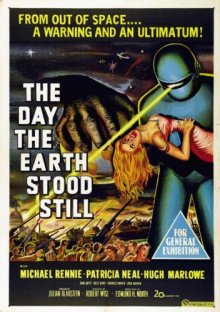 A large robot, which only really figures into the plot as a metallic butler, is shown looming over the city, a laser beam firing from its eyes while holding the damsel in distress a la that famous gorilla that climbs the Empire State Building.  The expectation is that this monster will terrorize our planet, wreaking havoc in our otherwise peaceful existence.

But when the space ship lands in Washington DC, an eerie but un-intimidating man walks out with a gift, and he is promptly shot.  The message is clear, we are the destructive force in this film, not the aliens.

That alien, Klaatu (Michael Rennie), escapes from a military hospital and adopts an alias, John Carpenter (JC).  He decides to live amongst the humans and to try and understand the way they think.  While the world obsesses about the aliens’ arrival and their rumored intentions, Klaatu merely observes them, mostly with objectivity but occasionally with the type of bemusement a parent might feel towards a stumbling child.

Klaatu and his species is much more advanced than humanity.  He says that his planet is a peaceful one, with no war.  He can heal a bullet wound in a matter of minutes, and he can solve complicated arithmetic which the world’s best scientist can’t even decipher.  Klaatu tells this scientist, Professor Barnhardt (Sam Jaffe), that he is here for a reason.  Klaatu tells Barnhardt about the danger of nuclear weapons, announcing that they will destroy the planet if humanity isn’t careful.  He refers to the conflicts which have resulted in war and millions of deaths as ‘petty squabbles,’ and he asks Barnhardt how he can spread this message to the entire world.

We know that getting this message out will not be easy, not just because we might be familiar with the state of the world both in 1951 and now but because the movie has made it a point to show us how flawed we are.  Other nations refuse to meet with the U.S. in DC or they declare that they will only meet in DC, and we’ve already seen how quick the U.S. is to militarize and even shoot at who they perceive to be the enemy.

At this point the movie is surprisingly quiet, focusing on these conversations meant to highlight the problems with our world rather than to show the spectacle of an alien arriving on earth.  Klaatu could look like a more out of this world character, but instead he’s just a human, one who can walk around with no concern he’ll be spotted for much of the movie.

The Day the Earth Stood Still takes this crazy, far-fetched premise (granted it’s not far-fetched for the sci-fi genre), and normalizes it.  If anything, Klaatu is a little boring, and his arrival a little unspectacular.  If the circumstances of his arrival were to be any more spectacular, it would detract from the message of the story.

Eventually the film builds to a climax where Klaatu, through a show of force in which he turned off the world’s electricity for thirty minutes, attracts many world leaders to the same spot, in front of his space ship.  Before departing he tells the world that they must figure out a way to be peaceful or else they’re screwed.

Before this climax, through the early portion of act 2, Klaatu spends time with a young boy named Bobby, the child of the family with whom he’s staying.  Through Bobby, Klaatu learns about the world, and it’s either a bad idea or a really good idea that he learns about the world through a child.  Bobby, let’s be honest, is an idiot.  He’s a kid, he doesn’t understand politics or seasons or the stock market, among several thousand other concepts, but perhaps none of that is important.  Bobby is untouched by a bloodlust that has seemingly permeated our entire world (I mean, I feel it now, you know?).  Unlike the rest of us he doesn’t go out and hunt for his own food each morning or participate in the yearly Purge.  Bobby is just a kid.  He likes the Yankees, going to the occasional movie, lamenting that he has to go to school during the week, and he hates war, though I would’ve expected a kid his age in this time period to spend most of his recreational time recreating war in the streets with his friends.

Bobby’s father died in World War II, and he shows Klaatu to Arlington Cemetary, where Klaatu really starts to understand the violent childishness of humanity.  These scenes are meant to highlight Klaatu’s growing connection to the boy and thus to humanity but also to educate the alien on our shortcomings.  Klaatu is silently appalled (though he rarely shows it) by the ways we live our lives and the things we’ve done.  He might be appalled were he to learn that The King’s Speech beat out The Social Network for Best Picture or that social media exists or that Taco Bell once made something called a Volcano Taco with lava sauce.

But the focus, of course, is on what the world has done previous to Klaatu’s 1951 arrival.  This is less than a decade after the end of the second world war and the two nuclear bombs dropped in Japan.  It’s also during the Cold War and a growing fear of the power of nuclear weapons.  Like most sci-fi films, this one is meant to highlight our current problems.  Sometimes this is shown through the depiction of a futuristic world where problems in our society are blown up and extrapolated to see where they could lead and thus to highlight the underlying issues that plague us.  But The Day the Earth Stood Still is very clear about its message.  They might as well have made that as a War of the Worlds type broadcast, made to seem real because the world of this movie is our world.  The spectacle (which isn’t so spectacular) of the alien arriving is meant to mirror what would happen if this alien really did arrive in our world.

This movie, despite its genre, is almost like a case study for what might happen in this circumstance.  It’s a out of this world story that is meant to be hyper-realistic.  There is no mystery or thinly-veiled allegory (except that of Jesus Christ).  It’s blunt, direct and a little fatalistic, only because you probably know that these problems with the world aren’t going away.