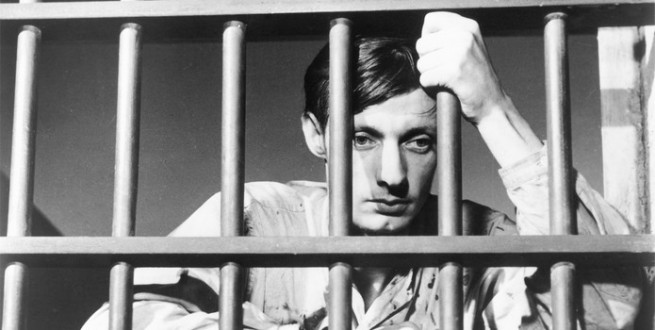 I’ve been repeating the title of this film in my head for a while, and I can’t figure out the correct way to say it.  Is it “a man, escaped” or is it a statement, as in “what happened?” “A man escaped.”  It’s important not to think about it, I guess.  It’s deceptively simple.

Robert Bresson’s films tend to be simple insofar as one thing happens, then another, then another, etc. like building each segment of a railroad.  The dialogue is often sparse or at least direct, and a given scene plays out with few surprises.  In A Man Escaped, Bresson takes advantage of the mannequin nature he enforces on his actors, creating a visual, visceral and exciting prison film.

There is something inherently fascinating about watching the details of a plan unfold, as we do here with French prisoner Fontaine.  It’s as if we’re figuring out what he could possibly do right there with him.  In this case, Fontaine is captured by German soldiers in 1943, and the rest of the film deals with his obsessive, single-minded goal of escape.

There are no betrayals, no extensive backstory and no real side plot save for the occasional conversation with an elderly neighboring prisoner.  A Man Escaped is about one thing: Fontaine’s escape.

Like in Escape From Alcatraz, the Clint Eastwood film, A Man Escaped is concerned with the hyper-specific details of Fontaine’s new life and the process by which he plans on escaping.  There is very little character building, and any world building in the film is concerned with only life in the prison, usually restrained to Fontaine’s cell.  This is a small-scale film with simple ambitions, even if Fontaine’s are grand.

Telling us that it’s 1943, and his captors are German, is enough for us to root for Fontaine.  We’re not weighed down with any musings on the moral gray area of his character as a prisoner.  The film creates an immediate dynamic where the prisoners are all the good guys, and the soldiers are all the bad guys.  Beyond the fact that it’s easy to associate Germans in the 40s with evil (I mean, Nazis, come on), the film does take a few steps to insist that the prisoners are all good people.  They look out for each other like brothers, and the few details we’re given about someone tell us that person should be innocent.  One is a comforting priest and another was turned in by his wife.  They call this latter man the bravest of them all.

So the dynamic, the conflict and the stakes are established early.  Later in the film, before his actual escape attempt, the stakes are raised when Fontaine is told that he will soon be executed, having been convicted of the crimes for which he was arrested.  This adds a sense of immediacy for his escape, but it doesn’t change the plan in any way.

Around this time he also gets a roommate, and this presents the only dilemma Fontaine faces in the film.  Through a consistent narration, Fontaine explains his thought process, and here he tells us that he must either convince the new prisoner (a kid) to escape with him or kill him in his sleep.  When he tells him the plan, though, the kid agrees to go with him with little thought.

The final sequence deals with his escape.  It’s the most exciting part of the film, but it’s presented in the same patient silence as the rest of the story.  Fontaine hardly speaks throughout the film, and here has no reason to.  His narration again keeps us up to date on his plan, and without the narration the film might be more engaging (as we lean in to figure out what he’s up to), but it also might be painfully silent.

When Fontaine jumps to the ground on the other side of the wall, finally free, he walks off into the night, and the film quietly ends with absolutely no fanfare or sentimentality.  This was a man who made a plan to escape because he was bored as much as anything else.  When he gets his freedom, he’s ready to move onto the next thing.

There is talk amongst the prisoners about keeping your mind sharp throughout their incarceration.  Fontaine assures one of them that they needn’t worry about him, he has something to occupy his time.  His escape plan, made with incredible attention to detail and patients, gives him something to do, like a hobby as much as a fight for survival.

Though this is a survival film, it never feels like one.  Fontaine never expresses fear or desperation, but maybe he would’ve if this wasn’t a Bresson-directed film.  In Robert Bresson’s films, he treats his characters like mannequins, seeking to strip their performance of any emotion or added filter through which the story must permeate.

He wanted to present each scene like an objective retelling of a story, allowing you to interpret the meaning any way you like.  For that reason, a film with this little dialogue seems perfect for Bresson.  The less dialogue there is, the less an actor can influence a performance.  The focus becomes more about the image, about an actor’s placement, expression and the lighting and blocking of a scene, components which are much more easy to control.

Like in his later film Pickpocket, there is an emphasis on a person’s hands.  That 1959 film featured many close ups of the protagonist’s hands as he deftly stole from unsuspecting bystanders, and here we are given plenty of closeups of Fontaine’s hands as he scratches away at the wooden door to his cell.  In both cases, the character has to perform as quietly as possible.  They are afraid to alert another party to their actions, but they might as well be afraid of drawing too much attention from Bresson to their performance.  It’s almost as if the best they could be is invisible, and barring any magical intervention, the next best thing they can do is pretend they aren’t even there.

And I guess what’s what these characters feel like.  They are so quiet, so desperate to hide, that they feel as though they’re withdrawing from the world.  The performers strip themselves so much of any emotive performances that their characters start to feel zombified.

Maybe it’s because I recently watched Alain Resnais’ Holocaust documentary Night and Fog, but Bresson’s characters, in their silence and bug-eyed expressions, feel like those old photos depicting prisoners stuck in concentration camps.  They are haunted, and you can tell so not because they look sad or angry, but because they have nothing less to emote.  They are empty, and so are Bresson’s protagonists, as in here, in Pickpocket and in L’argent, his last film which also detailed with a character’s somewhat unjust incarceration.