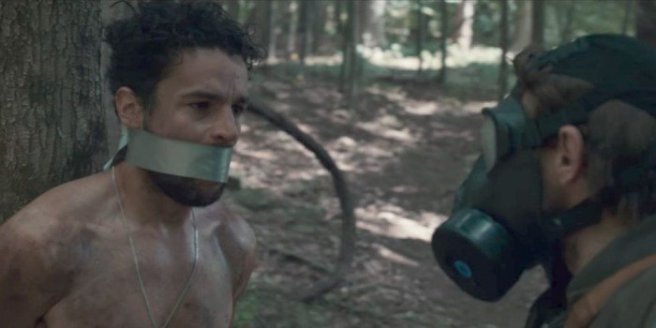 I think the best compliment a horror film can get is for someone to say, “well it’s not really a horror film.”  I heard that about Get Out, about It Follows and about this movie, Trey Edward Shults’ second film, It Comes at Night.

I’m not a big horror fan, so maybe that’s why I like all these movies, which I’ve heard ‘true’ horror fans call below average.  I heard the same from horror fans about Cabin in the Woods, a movie I adore.

What these movies do well, I think, is stretch out the tension.  They’re suspenseful movies, for the most part, that unsettle you, even if they don’t outright scare you.  It seems to me that horror films owe it to their fans to show the horror, but movies like this imply much of the horror and just focus on the characters.  In It Comes at Night, we never know why this world is the way it is.  We’re just thrown in and expected to catch up.

The real horror is a sense of dread, and the final gut punch should affect you on an emotional level.  There are no real jump scares or attempts to shock you.  Much of the violence, in fact, is fairly easy to stomach compared to in other films.  At the same time, the images can be incredibly unnerving, maybe even more so than in other horror movies.

The film opens with a woman saying goodbye to her dying father.  He has been touched by the fast-acting plague which seems to have turned the world into an apocalyptic wasteland.  He has sores all over his body, his breathing is labored, and soon he will be taken out into the yard where Paul (Joel Edgerton) will shoot him mercifully.

Paul, a lumberjack-looking man, is the elderly man’s son-in-law.  He’s married to Sarah (Carmen Ejogo), and they live with their 17 year old son, Travis (Kelvin Harrison, Jr.).  Travis is the clearest thing we have to a protagonist.  He’s one of the more passive characters, but we observe him as he observes the others.  We see into his dreams, and we identify with his empathy.  Despite not doing much in the overall plot, Travis is, in a sense, the most pure of these three characters.  Where Paul and Sarah are more in touch with the grim ways of the world, particularly Paul who might just embrace it, Travis has hope that things might one day settle into something resembling normalcy.

As it stands at the beginning of the film, the small family holes up in a cabin in the woods.  They wear gas masks almost anytime they leave the house, and they only leave the house at night.  It’s a quiet, solitary existence, but it has worked thus far.  Soon, a man named Will (Christopher Abbott) shows up, trying to break into the house.  Paul, armed and ready, jumps into action and quickly restrains the man.  He interrogates him, trying to take every precaution to make sure that he’s neither sick nor intent on hurting his family.

Paul, you see, is incredibly guarded.  He’s ready to kill, having done it before, and he will take no chances.  When Will seems to put Paul’s concerns to rest, they set out to find and bring back Will’s wife and young child.  On the road they are ambushed, but Will kills their two attackers, making us understand just how capable of violence he is.

In the second act, Paul’s and Will’s families live in harmony.  There is a friendly montage showing just how well this is going, but it’s not long before things predictably go wrong, only because they have to.  On one hand, you expect something to come out of the woods, based not just on the title but also because we expect a certain  number of answers about why this world is the way it is.  But It Comes at Night is never interested in those answers.  Sure, there are occasional threats running around the forrest, but they’re no more threatening than Paul is to them.

Every time they look out into the dark forrest, at some kind of vaguely audible threat, they might as well be looking into a mirror.  In one scene, Travis’ dog runs away, barking after some unseen threat.  Travis bolts after him, followed by Will and then Paul.  When they come to a stop, Paul orders them all to return inside.  The dog will return home if he’s still alive.

Later one night, Travis, whom we’ve established has a hard time sleeping at night, wakes up to find that Will’s son has wandered into another room.  He takes the boy’s hand and ushers him into his parents’ room.  Soon he discovers that the front door has been opened.  Upon being alerted, Paul inspects the threat, finding Travis’ dog sick and dying on the ground.  We might expect the dog to turn on them or for whatever got the dog to soon come after them, but this doesn’t happen.

Instead, the two families sit down and debrief what happened.  Travis explains that he found the front door open, and Paul, never far from suspecting anyone other than his own family, is ready to separate the two families.  He suspects that Will’s son may be sick, despite showing none of the symptoms yet.  They make a plan to quarantine the two families for at least the night.  Travis worries that he may be sick as well, considering he came into contact with Will’s son.

That night, following another nightmare, Travis wakes up and listens in on the other family fighting.  He wakes his father, telling him that Will and his wife plan on fleeing, possibly taking all of their food and water in the process.  This sets up a confrontation in which we see just how far both Paul and Will are willing to go to defend their families.

It’s a tense, brutal sequence that ends with Will and his son both getting shot separately, one by Paul and one by Sarah.  In a heartbreaking moment, Will’s wife, Kim, (Riley Keough), screams in anguish about the death of her child.  She tells Paul to kill her, and he does.

Travis watches the whole thing unfold, truly terrified, and though this type of terror isn’t surprising in a horror movie, it really sinks in here.  In another shot, Sarah comforts Travis, now covered in the same lesions which imply imminent death, and the final shot is a silent one, of Paul and Sarah sitting across from each other, both covered in the same lesions.  They say nothing, there is no music (that I recall), and we cut to black.

So, this type of film doesn’t feel all that original.  It’s a contained horror movie, set in a single location with a small cast.  It’s about distrust and paranoia, and it ends with everyone dying.  Plenty of horror movies end in such a way, with no one getting out, and in some ways, the end of this film feels inevitable.  Yet It Comes at Night is so effectively made.

Like in Krisha, Shults’ first film, we’re basically just circling the drain until everything goes wrong.  That first film is a pretty simple family drama, yet it’s filmed and scored like a horror film.  It only follows, then, that Shults make another family drama in this style, with the content filling out the form a little more.

The most consistent stylistic device in It Comes at Night is a slow camera movement forward, with the accompanying bass-y horror score.  Everything is ominous.  There is hardly a single shot that doesn’t feel burdened with paranoia.  I’d have to watch it again to double check, but it feels like the camera is constantly moving.  In the opening scene, the camera slowly circles around the dying grandfather, and in the first interrogation between Paul and Will, the camera circles around both of them, slowly and steadily.

In another moment, the camera pushes forward down a long hallway, with light illuminating feet in front of us, as if we are the paranoid homeowner, a flashlight guiding our way.  This shot first appears before Will tries to get into the home, almost as if the camera anticipates his arrival.  And maybe that subtle camera movement throughout the story is meant to symbolize the inevitability of the climax.  It’s like the camera is just slowly pushing in on the characters like it might slowly push in on the danger.  In this film, these characters are the danger.

Except for Travis, though.  He doesn’t need to work that hard to maintain his innocence.  He embraces this side of him while Paul has abandoned it long ago.  The arrival of Will, Kim and their child brings a warmth to the home that has been gone for sometime.  It just never feels sustainable because of how well it’s going.  When you anticipate the external threat, the real threat rises quickly almost out of nowhere, all brought about, possibly, by a sleepwalking child who accidentally opened a door and forgot about it.