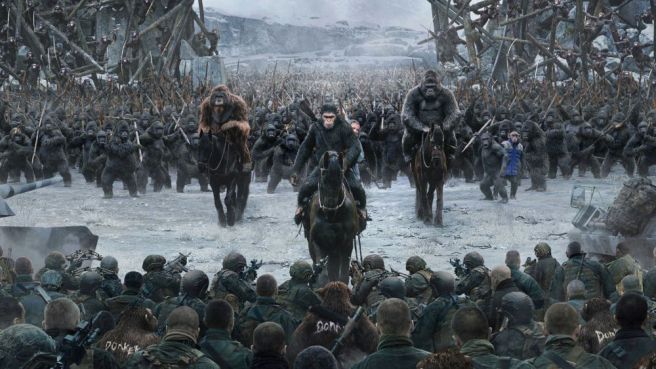 Did I like this movie?  I think I liked this movie.  It was nice.  It did the same thing Logan did, choosing to focus on a smaller, more personal story within a franchise that could’ve gone wider rather than deeper.  If Logan was really a version of Clint Eastwood’s Unforgiven, then War for the Planet of the Apes is Apocalypse Now, mixed with a little prison break.

After the first two Apes movies, this one really could’ve gone any number of directions.  All we know to expect is that apes and humans are fighting each other, and that’s it.  I wasn’t even sure how big of a world this was.  Are there fifty apes or a thousand?  What about the humans?

The second movie, Dawn, was a number of years after the first movie, Rise, though I forget how many.  With War, I figured this could be another ten years or so in the future.  So there were a lot of storytelling options, is I guess what I’m saying.

The story quickly sets up a Vietnam War-like tone, similar to what Kong: Skull Island did, actually setting the story during the Vietnam War.  Here our first glimpse into this struggle is through the approaching human troops, with phrases drawn onto their helmets like “monkey killer.”  Between this and the jungle setting, this began a clear comparison to the Vietnam War, itself a chaotic and unnecessary war, much like Caesar considers this one.  The clear point of this story is that war is pointless, but once the ball’s rolling, it keeps rolling.

After an initial battle and subsequent slaughter, the human troops, led by the Colonel (Woody Harrelson), kill Caesar’s wife and child, and he makes it his mission to get revenge on this Colonel.  This immediately makes the story much smaller and more impactful.  We should care about Caesar, considering we’ve followed him for two movies already, and director Matt Reeves seems to know that the only way to ground a story as big and basically absurd as this is to hone in on the one character we have any reason to care about.

And yet, Caesar’s journey quickly reconvenes with the apes he leaves behind for this mission.  He brings a couple loyal companions with him, and they stumble upon a young, mute girl whom Caesar reluctantly lets them adopt.  This girl’s muteness, we learn, is part of a disease that is starting to kill certain humans.  It’s a set up that doesn’t have much of a payoff beyond one, which I’ll get to in a moment.

About halfway through the film, Caesar and his small company finally track down the Colonel (Harrelson), someone we’ve briefly seen but who is mostly talked about when he’s not around, building up the legend of his character.  The Colonel has gone rogue from the rest of the human military.  He commands his own set of loyal troops in a fortified base tucked at the bottom of a mountain side.  This Colonel is basically just Colonel Hurtz from Francis Ford Coppola’s Apocalypse Now.

I should mention that Caesar is led there by Bad Ape (Steve Zahn), a comic relief character that seems to be in every big budget movie nowadays, like robots in The Force Awakens and Rogue One.  Bad Ape is not such a bad character, but he feels mostly unimportant to the story.  Still, I suppose he is somewhat charming, and his character is meant to serve as a reminder that the movie isn’t taking itself too seriously.  Or he’s just a character they can throw a bunch of jokey dialogue into and move on with an otherwise serious movie, at least tonally.

The apes that Caesar has been leading have now all been captured and treated as slaves.  Caesar meets with the Colonel who offers us his life philosophy and makes it clear that he’s gone rogue.  He’s a twisted fella, and Caesar wants very badly to take revenge on him, even as he fights this bloodlust since it is what doomed another ape, Koba, whom Caesar reluctantly killed at the end of the previous movie.

After Caesar is then held prisoner, we watch him lose hope before the rest of his traveling company find a way to break him and the others out, using a series of tunnels underneath the prison camp.  They all escape, relatively easily before Caesar goes back to kill the Colonel, and this is where that disease comes back into play.  It should be a big decision for Caesar to go through with his plan to kill the Colonel, but he finds the man sick, his nose bleeding and unable to speak.  The Colonel, no longer an intimidating figure, begs Caesar to kill him, but Caesar lets him do it himself.

And just like that, a fairly momentous plotline fizzles to an end.  The biggest danger is the suddenly violent attack of the other humans, the ones from whom the Colonel went rogue.  A battle rages on, and in the midst of the destruction the apes escape, at least until the soldiers find them and turn their guns onto the defenseless apes.

As he tries to blow up a gas tank, Caesar is shot, but another ape, one of the ones that has become a “donkey,” working on the side of the humans, redeems himself and kills the man who shot Caesar.  This allows him to go through with blowing up the gas tanks, destroying the Colonel’s base and causing an avalanche which wipes out the other humans.

The avalanche is substantial, but all the remaining apes survive as they climb trees to get out of harm’s way.  The humans, it seems, are buried.

Then Caesar leads a long migration out of the snow, and he finds a new home for the apes.  Then he reveals to his trusty advisor, Maurice, that he has been shot.  It’s that scene you find in every action movie where someone finally reveals a fatal wound.  But in this case, they’ve been marching for, what, like a few days at least?  There was a montage of them marching through the hills and only now does Caesar keel over from the wound he received in the battle and dies.  Yeah, Caesar dies.

Which, I guess is fine.  It’s symbolic, on some level, and it’s a romantic hero’s death.  But he survived for days with no one asking about the blood seeping out from under his arm.  Though, to be fair, most people I’ve known who have died have done so from wounds they sustained earlier and didn’t bring up until I at last noticed them.

This is a pretty fun action movie, as far as action franchises go.  It’s a more immediate story, about loss and betrayal and revenge, rather than just some story about the end of the world.  The stakes are large, but the cast of characters is small enough to be more dramatic.  There is also a good amount of social commentary, though not much beyond ‘war is bad’ and ‘people light to fight each other.’  It’s important that the humans end up fighting each other in the end, because, as Caesar notes, they will always be fighting each other.  The war never ends.

But this ending, while offering a point, lets Caesar off the hook.  In that moment with the Colonel, Caesar has a choice: He can kill the man who’s responsible for the death of his wife and eldest son, or he can let him go, resisting the temptation for revenge, something he battles with throughout the story.  Instead, he finds the Colonel sick, so he gets the benefit of having his enemy die, but he doesn’t have to do it himself.  This robs him of making that choice.  The people behind the script know that this will be a letdown as far as movie climaxes go, so that’s where the other humans come in.  There has to be some kind of final battle, because that’s what we expect in third acts.

So while this remains visually and aesthetically exciting, it feels like a narrative let down.  War for the Planet of the Apes is an exciting action movie that holds more depth than the average franchise film, but in the end it resorts to cop outs and cliches.  That’s not enough to make it not worth the watch, but it does fizzle when it pretends to end with a bang.