LBJ fluctuates between painfully cliche and occasionally informative, at least for someone like me who knows very little about important stuff.  Rob Reiner’s biopic of the guy who succeeded Kennedy focuses on his efforts to pass the Civil Rights Act, something Kennedy had championed before his assassination.  The film paints a portrait of a fascinating character, a liberal Southerner whose loyalties are divided between President Kennedy and his Southern base.  Johnson, a proud and vulgar man, knows exactly why he’s been put in this position, as a relatively powerless Vice President, solely to win Kennedy the presidency.

For the first half of the story, Johnson is completely powerless.  He struggles to influence the President, and the President’s brother, Bobby Kennedy, constantly feuds with Johnson, treating the older man like he’s nothing more than a waste of space.

The second half of the film takes place after the President’s assassination and Johnson’s sudden position of authority, the thing he’s been looking for the entire film.  Once he no longer needs to fight the uphill battle to get there, he starts to rethink his policies and his responsibilities as Commander in Chief.  The final climax deals with his pushing to pass the Civil Rights Act despite his original opposition to proposing the bill this early in time.

As a history lesson, this movie was quite fascinating.  Johnson is much more of a fascinating character than I first imagined.  Among the Presidents who get the most representation in movies, it’s probably something like George Washington, Lincoln, Kennedy, the Roosevelts, Nixon and then… maybe Bush and Obama considering they’ve each had one movie made about them.  And then you have that next wave, headed by LBJ.  Where’s Jimmy Carter’s movie?

But Johnson always seemed, I guess, kind of insignificant, granted that’s coming from me, someone who misses most current events and political news stories.  Johnson was like a struggling comedian who had to follow Chris Rock on stage.  He tends to get overshadowed, particularly because he’s sandwiched between Kennedy and Nixon, the last President to die in office and the last one to be forced out of office.

Because Vice President Johnson had very little to do, from the look of things, the film condenses this part of the story into about a fifth of the film (a pretty brief 90+ minutes, somewhat surprising for a biopic).  The film begins with the morning of JFK’s assassination, and throughout the first half of the film, we will return to the moments leading up the President’s death.  This is really just a teaser, something to hold our attention while the film labors through the run up to Johnson’s failed bid for the Presidency.

These scenes, on the day of the assassination, are pretty bad.  The CGI is terrible, and everything feels a little too showy, as if the point of every shot was to shine a light on the era-specific wardrobe.  These moments also have the burden of living up to every other cinematic portrayal of the JFK assassination that we’ve already seen.

Additionally, when Kennedy gets off the plane at Love Field, the first thing you do is see just how much like the President he actually looks.  And look, Jeffrey Donovan does a fine job, but Kennedy is so iconic that I think the most important aspect of this performance should be just to look like Kennedy.

Funny, that above image isn’t even from this movie, it’s from J. Edgar, so he’s sort of getting typecast.  Anyways, here’s President Kennedy in last year’s Jackie:

Now that’s a fucking Kennedy, good lord.  Here are some other portrayals of Kennedy in movies. 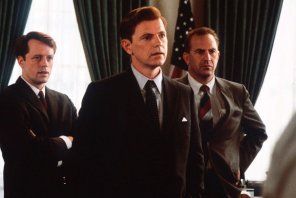 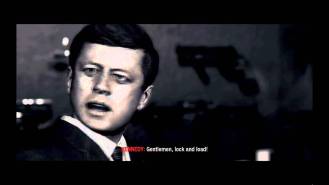 One of them is animated, I’ll let you guess which one.

Anyways, there’s an obvious attraction to the assassination as it’s presented in a movie, but LBJ kind of glides through it very quickly.  And I get why, because this is from the Vice President’s point of view, and the most important part of Johnson’s role in this event is what came immediately after.  Still, the shots in ‘Dealey Plaza’ (or the studio set up to resemble the plaza) are so clean, so bright and colorful.  It all feels like a cutscene from a video game.  Even the first scene, at Love Field when Air Force One first lands, is loaded with green screen and painted backgrounds.  There is a shot of excited onlookers cheering the President, and the camera is shoved in their face, making it look like Reiner simply didn’t have enough extras on the day of shooting and had to instead cheat the number.

It’s not a good tone setter, is what I mean to say.  A lot of the beginning of the story, in fact, is hard to get through.  Johnson as a character shines when he’s working towards something, as he is in the end of the film.  We’re told that he’s stubborn, a “workhorse,” and he has a storied political career behind him, yet all we see at the start of the film is a vulgar, angry man.

This characterization does provide for a strong character arc through the story, but I can’t help but think that the film tried to overemphasize Johnson’s less than stellar traits so as to better contrast with the more heroic figure he is by the end.  As a work of fiction, it’s well-done, but as the story of a real figure, it just feels way too neat.

I can’t tell if this story perfectly lent itself to a movie script or if a lot of details were changed or left out in order to fit this neatly into a script.  Because this is a very neat movie.  It has a strong character arc, clean act breaks and characters that fit into every necessary role, particularly Richard Jenkins as the antagonist Senator Russell, a man Johnson aligns himself with before becoming more progressive.

Within that structure, though, the film gets a little too cute.  There are several “moments” throughout the film that work well as thematic story points but which feel forced.  In one, Johnson yells at a staffer while asking his tailor to give him a pair of pants with plenty of room around the crotch.  In another, he talks to his chief of staff while literally wiping his ass on the toilet.  In another, he and Senator Russell discuss civil rights while being served by Johnson’s Black cook and maid.  In this case it just feels very heavy-handed, and really that’s my complaint about much of the movie.  It’s a heavy-handed story, but a well-made heavy-handed story.  Actually, movies shouldn’t be marketed with ratings like PG-13 or R but instead a stamp that says “heavy-handed” or “not heavy-handed.”  I think that would make it much easier to decide what movie you and the spouse want to see.  “Are we in the mood for Not Heavy-Handed?” “I don’t know, it’s been a long week, let’s see Hacksaw Ridge for the third time.”

Here are my notes on the film right after I saw it:

-the obligation to show the JFK assassination

And that’s about it.  Harrelson looks a bit silly as Johnson at first, but he does a nice job with the role and soon I forgot how ridiculous his facial prosthetics looked.