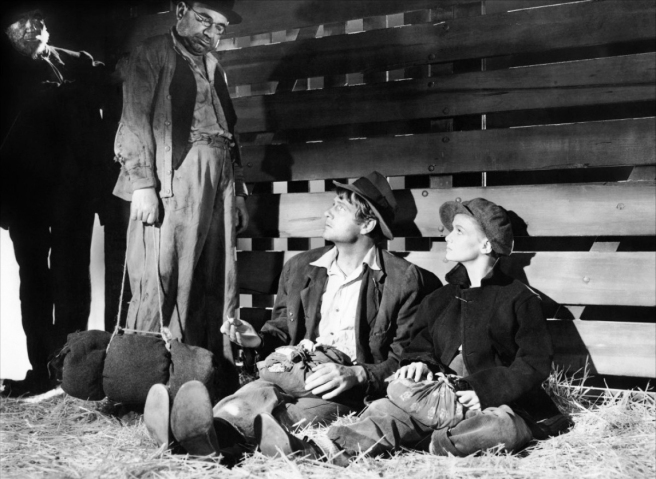 Sullivan’s Travels is a screwball comedy with an honest message, spoken by the protagonist at the end of the film: “There’s a lot to be said for making people laugh.  Did you know that’s all some people have?  It isn’t much, but it’s better than nothing in this cock-eyed caravan.”

The film operates on a meta level, though it’s hard to tell if the message is itself just a joke or something meant to be taken seriously.  Preston Sturges is a comedic director whose films, like the ones made by John L. Sullivan (Joel McCrea), are meant to induce laughter and not serious thought.  As the film begins, Sullivan is a successful Hollywood director, but has aspires to make films with a deeper meaning than the comedies he has created.

On a journey of self-discovery, still presented through the same slapstick lens as Sturges’ other films, Sullivan finally gets to the last line of the film which seemingly confirms his untested belief from the start of the story.  This ‘message’ feels directed at those who might criticize Sturges than at himself.  He’s a director with a clear style, and though this film in some way analyzes his own body of work, it nevertheless fits right in to that filmography.

As John L. Sullivan declares his intention to live life as a bum for the near future in order to attune himself to the suffering of the poor, the studio freaks out and takes an incredible number of precautionary steps to ensure that he comes to no harm.  It’s absurd how over-protective they are, and this dynamic, while adding humor to the situation, helps undercut Sullivan’s self-importance.  We know this isn’t a very serious journey because he has a team of people behind him every step of the way, like he’s an Olympic athlete.

On this journey, Sullivan continuously finds himself back in Hollywood, as if there is a magnet pulling him back home, and soon he comes across a struggling actress, named only The Girl (Veronica Lake).  Without revealing too much about his true identity (he still looks like the hobo he aspires to be), Sullivan insists he can help out her career, but she seems more interested in this journey of his.

They then travel together, hitching a ride onto a moving train, eating in soup kitchens and living like the poor.  There is one particular sequence that feels straight out of Alain Resnais’ Night and Fog (1956), a short documentary on the Holocaust, which should already suggest the grim tone of the film.  It’s a sequence in Sullivan’s Travels in which the camera lingers on those who are suffering and from whom Sullivan hopes to discover some of the facts of life.

Thankful for what these people have unwittingly taught him, Sullivan plans to hand out money as a gift, but he is assaulted by one vagabond who has already stolen his shoes and who is subsequently killed by a passing train.  When the mangled body turns up, complete with shoes that identify him as John L. Sullivan, everyone believes Sullivan to be dead.

Sullivan himself turns up in another city, and while a little out of his mind due to confusion brought on by his assault, he himself assaults a railroad worker and is sentenced to six years of hard labor.  While living in this new situation, he one night watches Walt Disney’s Playful Pluto, a cartoon which he heartily enjoys alongside the other workers.

Still trapped, he decides to confess to the murder of himself, and when his picture shows up in the paper, he is promptly recognized and brought back home.  Now enlightened, so to speak, Sullivan delivers the message that comedy is all that some people have, and it’s a worthwhile endeavor because making people laugh is enough.

Sullivan’s Travels is silly from start to finish, as a lot of screwball comedies are.  It starts with the hero and his absurd decision to live amongst the poor in hopes of learning something from them.  As an advisor tells him, this is slightly manipulative and turns the poor into something to be used, as a resource for the wealthy.

John L. Sullivan plays the fool, to some degree, like Henry Fonda in The Lady Eve, though more of the comedy is mined from what he puts his team of assistants through.  In one of the biggest set pieces, Sullivan hitches a ride with a kid who declares his intention to become a race car driver, and the caravan containing Sullivan’s assistant, doctor, cook, etc. struggles to keep up.  As the van rocks back and forth during the car chase, characters will slide this way and that in a sequence that seems like pure screwball, if that is such a thing.  They flail around like a Charlie Chaplin character, and though he’s not driving, Sullivan himself is more in control of the situation.

Sullivan’s plan is ridiculous and makes him the butt of the joke, but the way he follows through with that plan is somehow honorable.  We’re meant to believe that he’s actually grown as a character, and he decides to take care of The Girl and many of the poor he meets along the way.  When Sullivan is arrested and sentenced to hard labor, this sequence is played straight.  There is no comedy in this moment, just a character learning a lesson.  It’s like the end of A Christmas Carol.

But that sentimentality and straightforwardness of the film’s final act feels a little too sentimental to be taken seriously.  Maybe the ultimate joke really is just that Sullivan decided to go on this elaborate journey which only confirmed what he believed at the start of the film.  He’s a successful writer looking for fulfillment, and like (SPOILER) Don Draper at the end of Mad Men, he finds it in the thing he was already doing.