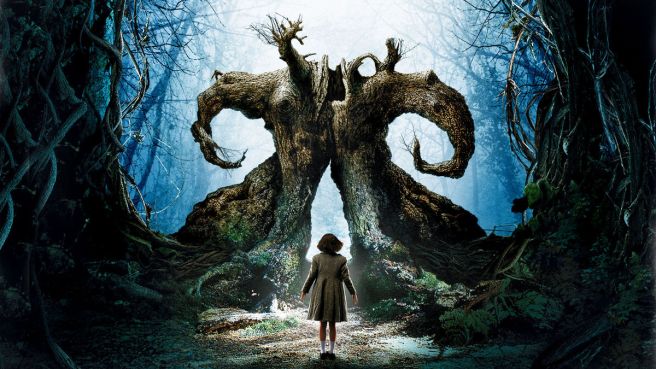 Pan’s Labyrinth is a violent fairytale, like those old stories ostensibly made for children but which you now see as incredibly creepy and haunting.  The fairytale land to which Ofelia runs off for periods of time is less The Chronicles of Narnia and more… I don’t know, David Lynchian?  Here are some visual examples from the film: 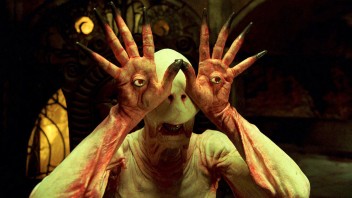 The story is also set during the Franco regime of 1944 Spain.  Our young hero, Ofelia (Ivana Baquero) is the stepdaughter of an evil army captain who is in the middle of a fight against the Rebel Alliance from Star Wars, or at least they’re made to feel like the Rebel Alliance.  The characters running around the forrest surrounding Captain Vidal’s (Sergi Lopez) large home are the good guys.  Vidal is very much the bad guy, but Ofelia is only thrust into his orbit because her mother Carmen (Ariadna Gil) is pregnant with Vidal’s son.

The film is composed of two separate storylines that intersect in the end.  The first is that military battle between Vidal and the good guys.  We meet a few other characters who will become important, two of whom are moles in Vidal’s home for the good guys and many who meet their grizzly demise.  As the battle rages on, Carmen becomes sick and soon she will die during childbirth.  The effect of this story, more grounded in realism, is to further alienate young Ofelia.

The other half of the movie concerns the fairytale adventure given to Ofelia by a faun who believes she is the reincarnation of an old princess.  The faun asks her to carry out a series of tasks that will make her immortal.

The first involves retrieving a key from a large toad, and the second involves following three fairies into the lair of a child-eating monster.  When Ofelia disobeys the faun and eats a grape from the monster’s table, the creature wakes up and bites off the heads of two of the fairies.  Enraged, the faun refuses to give her the third task.

Eventually, however, he does.  The narrative interweaves the fairytale storyline and the military one, each scene somehow more violent than the previous.  The faun and his labyrinth is an escape for Ofelia, and she embraces it despite the absurd horror of this world.  I suppose the point is to highlight just how horrifying the real world is, and after this second task, we watch as Ofelia’s mother dies.  Then we watch the torture and murder of two more ‘good guys’ before a scene in which another character slices open the Captain’s cheek.  There’s a lot of violence, and it certainly makes you squirm.

Eventually the faun returns and tells Ofelia to bring her baby brother into the labyrinth.  She does, and Captain Vidal follows her.  The faun, whom the Captain is unable to see, tells her that the portal can only be opened with the blood of an innocent.  Ofelia refuses, but then Vidal takes the baby from her and shoots her.

The Captain exits the labyrinth where he is surrounded by the Rebel Alliance and shot dead.  The rest of the good guys then find Ofelia’s body, her blood dripping into the labyrinth and opening the portal.  In the ‘underworld,’ the King tells Ofelia that she has passed the final test by choosing to spill her own blood rather than to harm her baby brother.

Ofelia is welcomed into this underworld where she returns as Princess Moanna, the immortal being briefly described to us in voiceover at the beginning of the story.  Ofelia dies and Moanna lives.

Pan’s Labyrinth is kind of classic fairytale that stands out because of the violent nature of the film and the period piece backdrop.  Actually, I suppose several fairytales (including Narnia) have a period piece setting, but Pan’s Labyrinth doesn’t offer up the fairytale world as some kind of heavenly alternative to reality.  It’s just as horrifying as Ofelia’s own life, and in a lot of ways the fairytale world seems to parallel her own.

This film is presented as a fairytale, but everything about this story is pretty horrifying.  One world isn’t quite an escape from the other because in both worlds Ofelia finds herself flirting with death.  The Captain could easily have her killed, and once Ofelia’s mother dies, there doesn’t seem to be any reason for him to keep her around.  And then you have the ‘fairytale’ world in which Ofelia faces life or death situations like in so many fantasy stories, but this time you can really feel how close to death she is.  This isn’t a playfully dangerous world.  She could die, and she makes a mistake that leads to two of her fairy guides getting brutally torn in half by a fleshy monster that looks like the creature from Eraserhead all grown up if the creature had an insatiable appetite for children.  *Also, there seem to be a lot of child-eating monsters in fairytales.

The choices Ofelia makes in this part of the story highlight a broader theme of the movie, rebellion.  If this is a story heavily focused on the rebels fighting back against the Captain, each of Ofelia’s ‘tasks’ involve some kind of rebellion.  In the first one she is so immersed in the fairytale that she muddies her dress and angers her mother who wants her to make a good impression on the Captain.  In the second task Ofelia is told not to eat the grapes, but she does anyways, and in the final one she is asked to spill the blood of an innocent yet refuses.  Finally she is rewarded for such a refusal.

“According to Guillermo del Toro this theme is why the movie is set against the backdrop of falangist Spain (where disobeying the fascist regime was dangerous), and the final test of character for the princess confirms the importance of disobedience as well.”

Also, this from Roger Ebert’s review: “what [the faun] actually offers is not good or evil, but the choice between them, and Del Toro says in a commentary that Ofelia is ‘a girl who needs to disobey anything except her own soul.’ The whole movie, he says, is about choices.”

“Although audiences have interpreted the film’s bittersweet ending as everything from a religious metaphor to a psychological allegory, Guillermo del Toro offers a simpler, but more poetic, explanation, “I always think of that beautiful quote by Søren Kierkegaard that says the tyrant’s reign ends with his death, but the martyr’s reign starts with his death. I think that is the essence of the movie; it’s about living forever by choosing how you die.”

Pan’s Labyrinth isn’t a movie I fully expected to enjoy, and many of the fairytale aspects of the story feel copied from so many that came before.  But I think the film is quite good because of the spin it puts on these tropes.  Del Toro takes aspects of fairytales that we’ve come to expect and gives them a reason for existing.  How many times have you seen a character walk into a new world with explicit orders not to touch something and then they touch it?  It happens all the time, but Ofelia’s disobedience serves a broader purpose.  She’s a character who rebels in small ways against the powerful forces around her in the real world, and she does the same in the fairytale world.

The film is uniquely horrifying in ways I didn’t anticipate but probably should have considering some of Del Toro’s other works.  There’s a scene in Hellboy that involves a man impaled on a large spike that still sticks in my mind, over a decade after having seen it.

The violence is anything but watered down, and Del Toro finds a new way to make you wince overtime someone dies, which is how it should be.  In the first character death, a man has his face bashed in with a hammer while his father watches, and in the final one, Vidal is shot through the cheek, and we watch his right eye start to sag as he dies.  It’s a small but effective touch.

Pan’s Labyrinth is more horror than fantasy, despite the somewhat happy ending, which isn’t really a happy ending.  Or is it?  I can’t tell.