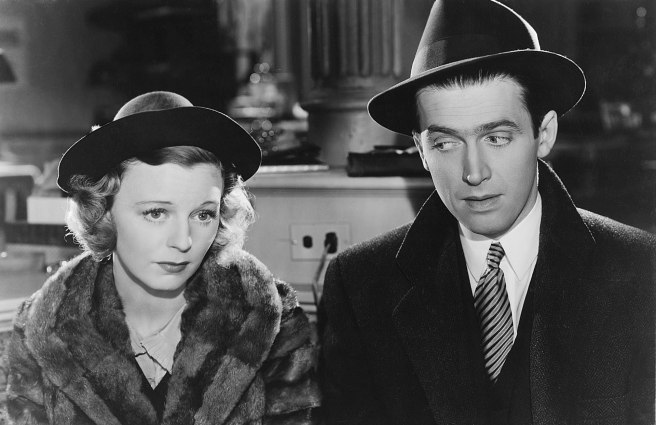 In Corner, there are two employees who are constantly at each other’s throats and who have been unknowingly corresponding with each other through lustily written letters.  I mean, maybe it’s not lust-driven, but they’re love letters that they’ve been writing to an unknown correspondent for months.  We learn pretty early on that they’ve been writing to each other, and soon the guy learns what’s going on before the girl but chooses to tease her with this information in a vaguely-creepy way made much more creepy in the Nora Ephron adaptation of the film.

Those unwitting love birds are Alfred Kralik (James Stewart) and Klara Novak (Margaret Sullavan).  They each work at a small shop owned by Hugo Matuschek (Frank Morgan) in Budapest.  Despite the character names and the film’s setting, everyone just sounds American.

The setting for the film doesn’t much matter considering the disregard for accurate representation of accents and language, but putting the film in Budapest helps put the setting in some kind of bubble.  Scott Eyman, a biographer of Lubitsch, described what is known as the ‘Lubitsch touch,’ saying, “Lubitsch’s movies take place neither in Europe nor America but in Lubitschland, a place of metaphor, benign grace, rueful wisdom.”

The great majority of The Shop Around the Corner takes place in the ‘shop,’ as if it’s the only place in which these characters’ lives unfold.  Their lives outside the shop, like the love letters, are all implied.  We hear them talk about what else is going on, but we only see them interact within the shop.  As the story progresses there will be scenes at a nearby cafe and at a hospital, but the biggest plot points, including the couple’s ultimate union, take place in the little shop.

And it’s a nice shop, too.  This being a pleasant comedy, the world of Matuschek’s shop is incredibly playful.  Everyone gets along for the most part, and even Klara’s and Alfred’s bickering feels playful, meant to reflect the fine line between love and hate.  Additionally, one of the best characters is Pepi (William Tracy), a hustling delivery boy who takes advantage of every opportunity to move up the corporate ladder.

In this world, nothing is all that consequential, and everything is light-hearted.  There are the familiar tropes of old Hollywood movies like the fast-talking, witty female lead, the older character who pops in, hears something and then quickly ducks out, the flustered male who can’t believe what he’s hearing, the recurring visual gag, etc.  Are those tropes?  They seem like tropes to me.

So this is a delicate, enjoyable, quaint world where everything is proper on the surface, but the humor undermines that facade.  You get the impression, though, that everyone gets along and cares for each other like family.  Whether or not that’s the case, the film creates a tone of intense warmth.  It’s the type of world you’d want to live in, where nothing is too bad and nothing is too good, because if it were, then the movie would be over.  The characters in a story like this pretty much have it all set out in front of them, but they want something more, mainly love.

That being said, within the film, Matuschek attempts to kill himself, and Alfred is fired from his job when Matuschek mistakenly believes he has been sleeping with his wife.

Suddenly there are consequences, and it’s quite surprising, almost coming out of nowhere.  In a modern movie like this, the inclusion of a suicide attempt would not fit tonally into the film, but it’s incorporated somewhat seamlessly here.  Pepi saves Matuschek’s life and then the film mines humor out of his attempts to almost extort Matuschek into giving him a promotion.

Billy Wilder’s The Apartment similarly included a suicide attempt (or two) into an otherwise fairly broad comedy, and I think that says something about this time.  On one hand, movies today are much more free to include things considered taboo or risqué.  I mean, there are movies made about just about everything, but generally you know what you’re in for when you go into a movie.  Studios carefully market their movies to a specific audience, so if you go to see, say, You’ve Got Mail, you don’t anticipate that Tom Hanks’ boss will try to off himself.  It just doesn’t fit.

So in 1940, perhaps there were just fewer genres, and maybe what defined a genre was just how the movie ended.  Or maybe not, I really have no idea, but it’s kind of incredible that a family-friendly movie like this will so casually include a character’s attempts to kill himself.

And it somehow works.  The movie treats everything with a light-hearted touch, and the suicide hardly slows the movie down.  Before you know it, Matuschek is out of the hospital and joyfully showering his employees with praise for a profitable night.  Was anyone paying attention?

In some ways this might just be a brutal simplification of suicide.  It’s a joke in this context.  Oh, Matuschek is sad, well how sad is he?  Of course he tries to kill himself because that gets the point across.  It’s kind of like the representation of alcoholism in Billy Wilder’s The Lost Weekend (1945).  Each film seems to gloss over the nuances of a particular condition or decision, so the inclusion of it in the film just magnifies how little this kind of stuff was understood.

Or maybe this was made in a time after the Great Depression and as Germany was marching through Europe, and the world had already seen some shit so something like suicide wasn’t looked at with anything other than matter of factness.  It’s just another part of life, or something like that.