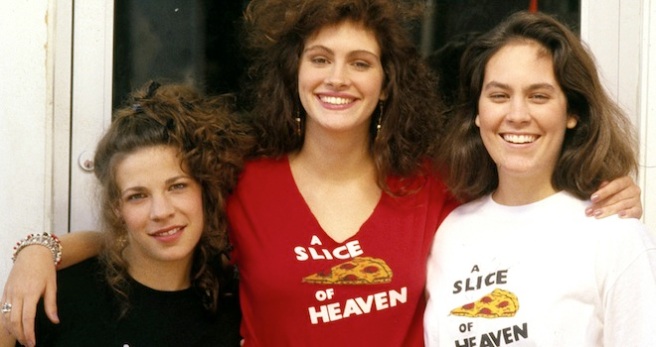 There’s a real Terms of Endearment vibe going on in Mystic Pizza, even beyond the thick 80’s-ness of each film.  They are stories about family and the ways family keeps you sane when everything else conspires against you.  While that 1983 Oscar winning film portrayed such an idea (to tragic ends) over the course of years, Mystic Pizza does the same over the course of maybe a few weeks.

This feels like a camp movie.  The three main friends all work together at Mystic Pizza in a small Connecticut town.  It’s the type of place you never leave or venture to only for vacation.  These three friends have a home away from home at the Pizza joint where they work.  Most of the time they just seem to be hanging out, and like so many young people hangout movies, the film is shot through a nostalgic lens in which everything kind of feels okay, because as you get older the problems of your youth begin to feel less severe.

The film opens with a young woman, Jojo (Lili Taylor), looking downright petrified at the altar next to her husband to be, Bill (Vincent D’Onofrio).  When the priest remarks on the permanence of marriage, she faints.  Next thing we know, she and her friends, Kat and Daisy (Annabeth Gish, Julia Roberts), are recounting the incident while at work, as if it’s just another in a long lines of quirky events in their lives.

These are just children, even if one of them was on the cusp of marriage.  Their subsequent personal and romantic ups and downs which will dictate the course of the film paint the picture of characters coming of age, learning valuable lessons.  In these types of stories, the end is always somewhat preordained.  In other movies of this type, the story will take place over the course of a single summer, so we already know when the movie will end, it’s just a matter of how the characters feel when they get there.

And I think there’s always a place for movies like these.  They’re reminders of what we once were, and they tend to embrace the vast unknowable quality of the rest of your life. They don’t focus on what’s ahead, but they celebrate what’s come before.  You can picture each of these characters reflecting on this time of their lives with the same, ‘I was so young’ attitude.  In a sense they all just learn lessons they need to learn and which just about everyone will learn as they get older.  Movies like these, in other words, celebrate the transitions we all must push through at various points in our lives.

While Jojo runs from the altar, she remains in a relationship with Bill, despite her apprehension towards marriage.  His steadfast insistence that he loves her might only make her more unsure.  The film is pretty balanced between their points of view.  Bill isn’t wrong for expecting her to commit, considering what it seems like they’ve been through as a couple, and Jojo’s apprehension is understandable, mainly simply because of her youth.  How can you be sure of anything?  Can you ever?  Well, maybe, because eventually they do get married.

As this is going on, Daisy, the one who demands the most attention from the opposite sex of the group, begins a relationship with a rich kid, someone who might as well be a distant relative of the Kennedys.  Charlie’s (Adam Storke) wealth contrasts with Daisy’s poverty, giving their relationship a sort of Romeo & Juliet quality.  Looking the part of every 80s’ blond douchebag, Charlie makes us absolutely sure that he’s going to turn out to be that douchebag, offering Daisy a lesson in love which she will carry with her into adulthood.

Instead, while Charlie is made to be aware of his own unearned fortune, he turns out to be a good guy, even if a little conceited.  Their is the red herring, leading us to believe he is cheating on Daisy and confirming everything we’ve suspected, but then Charlie’s character flaw has more to do with his strained relationship with his father and a need to use Daisy to get back at his family, knowing that her relative poverty will make them raise their eyebrows.  It’s a hurtful move, to be sure, but in the end he acknowledges his misbehavior, and they have a small reunion.  Everything turns out alright.

Kat’s story doesn’t quite end with the same romantic promise as the first two, though she is still given an optimistic final note.  She is the youngest and most sheltered of the three. Even while working at the pizza place, she finds time to work in a planetarium and then to babysit for an appealing, married young father, Tim (William R. Moses).  It’s pretty clear from the start that she is attracted to Tim, despite the age difference and his marriage.  While his wife is out of town, however, they get closer and closer in a way that you could maybe read as romantic but which really is pretty creepy.  Tim’s charm quickly dissipates and starts to feel more like a power play when it becomes clearer where this is headed.

Kat falls under Tim’s spell until his wife returns, and the bubble is burst.  A woman offering payment to her daughter’s babysitter has never made my skin crawl like it does in Mystic Pizza.  After overcoming this low moment, Kat and Daisy bond, and eventually she is given money to help pay for her tuition at Yale, which, apparently she’s going to Yale.

So everything works out.

A story like this makes it pretty clear that everything is going to work out.  It has to, in a way, because for the most part your youth works out at least in terms of getting you here.  The problems of your past are for the most part trivial despite how they may have felt at the time.

While other coming of age films focus on the world around us, giving us characters who must learn some cruel lesson about the greater world, Mystic Pizza stands out because it’s a story about characters who must learn something about themselves.  And that’s what growing up is, right?  More than learning about the real world, it’s about learning how you deal with and adapt to that world.  How do we rebound when things don’t go our way?

You have to get past some of the cheesier qualities of Mystic Pizza to enjoy it.  The soundtrack is painfully 80s, and Charlie/Daisy are kind of a hard couple to root for.  I really didn’t much like them.  Daisy’s spiteful nature came out in full display in a lengthy dispute with Kat, and Charlie always kind of sucks, though maybe I reacted more to his obvious family wealth.  He’s a spoiled kid who has to learn to accept his role in causing his own problems, which is cool and all, but Daisy’s initial attraction to him seems based on his superficial qualities (wealth), and it all just kind of sucks.  She stands up for herself in an admirable way, and the ending works, but man Charlie is just no fun.  Oh, his little brother is Matt Damon, though, so that’s kind of cool.