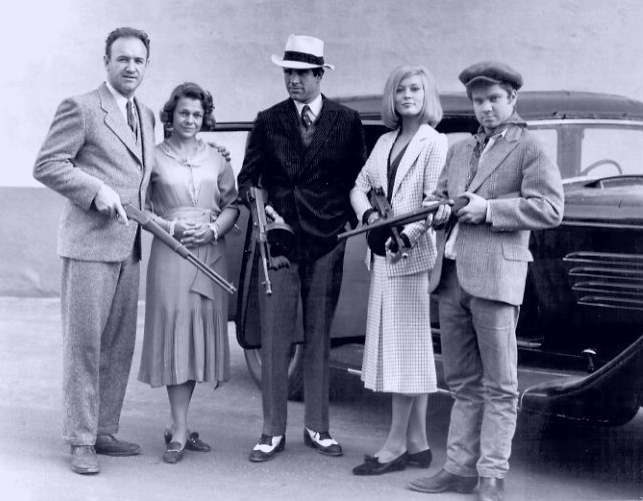 Bonnie and Clyde is one of the more revolutionary films of the last 50-ish years, and I’m not sure why it took me so long to watch it.  It’s like the Citizen Kane of the American New Wave (aka New Hollywood) movement which took place in the late 60’s and 70’s.  Whereas Citizen Kane was polished, introducing a new visual language within movies, Bonnie and Clyde is grungy, inspired by French New Wave films and their nontraditional shooting, editing and storytelling patterns.

Form and content influence each other equally in this ultraviolent, ultra-risque movie.  It’s a story about glamour that quickly becomes very unglamorous.  It’s a love story in which the lovers get together quite early on, and it’s a road movie in which the gang holes up in a quaint cottage for much of the runtime.  It’s a story that plays on the legend of Bonnie and Clyde while trying to demystify and even undercut that image.  That being said, the famous end to the film decides to embraces that myth of these violent outlaws.

So what was Bonnie and Clyde trying to do, and why was it such an influence on later filmmakers?  It’s a bold reaction to American studio movies made at the time, but there were movies made much earlier which went for a similar type of gut punch (1950’s Gun Crazy).  Bonnie and Clyde wasn’t the first movie to challenge its audience with images of sex and violence, but it kind of feels like it was.

The glorification of two criminals was somewhat taboo, and beyond that there’s an oral sex scene that involves impotence.  The movie at once puts these characters on a pedestal and then yanks them back down.  Are they some kind of mythic heroes or just lackluster individuals whose lust for power was fueled by a sense of boredom?  That certainly seems to be the case with Bonnie.

The idea of hitting the road, robbing banks and getting away with it (all while attracting a certain amount of fame) is certainly a case of wish fulfillment on some level.  I think I say that a lot, “on some level.”  It’s wish fulfillment.  Whether or not we agree with Bonnie and Clyde’s actions, there is an undeniable thrill to what they’re doing.  They’re rich, young and vibrant, and they’re cool.  The outfit worn by Faye Dunaway in the movie became very fashionable after the movie’s release.  She wasn’t just a criminal, she was a smooth operator with a sweet frickin’ beret.  Clyde (Beatty) is similarly stylish with his 1920’s gangster suit and top hat.  These were characters meant for fame and who found it by breaking the loosely-enforced rules.

That’s the other thing, for them to get away with bank robbery, all they have to do is drive fast for a few minutes or if that fails, cross state lines, and they’re in the clear.  It takes little effort for them to rob these banks, as if we could all be wealthy, but most people are nice family folk who would never consider such a thing.  This contrast between the two and just about everyone else around them makes them more of an outlier.

There is something wrong with Bonnie and Clyde.  Either they’re insane or ahead of their time, seeking to grab the American Dream by the throat like so many characters in subsequent movies.  I’ve discussed this skewed view of the American Dream in recent reviews (1957’s Sweet Smell of Success, 1951’s Ace in the Hole), so all I really have to say about is it seems to represent a disenchantment with what we were promised.

Bonnie and Clyde was hardly revolutionary in presenting this fed up attitude (many films would be influenced by the anger towards the Vietnam War in this time and later on), but there’s something appealing about just how against the grain these characters are.  Instead of making a movie about a world that embodies this kind of rebellious spirit, director Arthur Penn puts it all in his two characters.  To make it pop more, he presents this world as painfully dull and puritan.

So despite their criminal ways or I guess because of them, Bonnie and Clyde are symbols of fighting back.  Their spirit is admirable, but they’re rotten to the core, at least by the end.  The characters are romanticized and romantic with each other.  They’re calm and collected and the poster image for confidence.  They don’t give a f*ck.

But then the film picks this apart.  First there’s a comically poor bank robbery, Clyde’s impotence and another character, Blanche, whose constant wailing is either the funniest or most grating part of the movie.

It’s only now occurring to me how funny parts of the movie are.  Penn finds a way to undercut his characters through comedy, and with that lens he shows just how unsustainable this all is.

If Bonnie and Clyde were truly rebellious, then they’d get away in the end.  They don’t, famously, and this was never going to be an Inglourious Basterds type of rewriting history.  Maybe it’s rebellious that their deaths are so explosive.  In most movies following a criminal, particularly at this time, their rise necessitates a fall.  We can’t be giving audiences these kinds of ideas, was the thinking.  If they see criminals do bad things and get away with it, well it’d be like we’re encouraging them to do these kinds of things.

So Bonnie and Clyde’s transgressions required a strong comeuppance.  They certainly get it, but the film never really lingers on the people who finally brought them down.  When Bonnie and Clyde die it’s not so much that they’re finally brought down but that we’re given a spectacle to equal the spectacle of their crime streak throughout the film.  It’s a moment of awe, one which still finds a way to celebrate their rebellious nature.  Their deaths are so over the top that it starts to feel unnecessary, like the ones taking them down are overstepping their bounds.  Suddenly Bonnie and Clyde become two more people held down by a rigid system that doesn’t allow for any originality.  When you watch this scene out of context, the gun-toting officers feel like the bad guys.

The spectacle of the deaths of Bonnie and Clyde celebrate their legend more than it depicts their downfall.