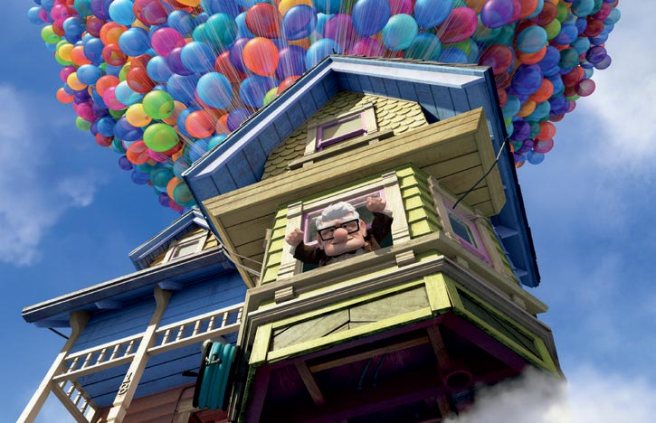 In Up, Carl Fredricksen retires to South America by way of floating house in order to fulfill a dream shared by himself and his now deceased wife, Ellie.  The dream is to visit Paradise Falls and to someday live there, but as an early montage shows us, life moves by pretty quickly.

Carl and Ellie meet as young children, both admirers of famous explorer Charles Muntz.  They grow up, fall in love, get married and endure the highs and lows of life, all hand in hand.  Eventually Ellie passes away in a manner typical of what many consider a long and healthy life.  This catches us up to date where we meet Carl as an old man, spending his days out on the porch amidst the urban center developing around his once quiet home.

Carl is already a tragic figure and one we can relate to.  He’s an everyman, and he’s in a situation many of us might look forward to or lament.  He’s done everything right, lived a long life, but it leaves him in a hollow place.  That’s mainly because of the trip he and Ellie were never able to take to Paradise Falls.

When a situation unfolds that results in a court order for Carl to abandon the home and moe into a retirement community, he decides to simply unearth his home and float away with thousands of balloons.  What Carl didn’t plan on was the company of a young wilderness explorer, Russell, who was looking for an imaginary bird under Carl’s home at the time of lift off.

Carl and Russell are the perfect odd couple, with plenty of humor found between their grumpy old man and restless young kid personalities.  They end up, somewhat incredibly, at Paradise Falls but far enough away that the two of them have to walk the floating house to the large waterfall.

They meet a large bird which Russell names Kevin as well as a golden retriever, Doug, with a collar allowing him to talk.  The dog and his collar are there because of that famed explorer, Charles Muntz who has lived here for quite some time in hopes of capturing the bird our heroes know as Kevin.

Carl is ecstatic to be in the presence of his childhood hero, but Muntz soon becomes villainous when he reveals how much he wants the bird and that he may have nefariously gotten rid of others who have stumbled down to this neck of the woods.  The second half of the story concerns Carl and Russell’s effort to save Kevin from Muntz and return home.

I continue to believe that the best way to learn about storytelling structure is through Pixar movies, and Up is a great example.

You start with the hero in stasis: Carl is a retiree living in an old home, amidst old memories, in a landscape that would love to be rid of him.  He’s also in a situation that needs changing, even if he doesn’t know it.  Carl, as an old widower, clings desperately to the past, something he doesn’t yet realize is holding him back.

Then you have the inciting incident: When a truck backs into his mailbox, Carl lashes out and injures a construction worker by clubbing him over the head with his walker.

After that comes the deliberation, what do you do in response to the inciting incident?  In this case, the ‘incident’ forces Carl to move into a retirement home.  The night before he is to be taken away, he looks through old photo albums of memories he shares with his wife.  Something spurs him on, a collection of Ellie’s exploration dreams and her desire to live in Paradise Falls.

Carl decides to fly away in his own house, with Russell unwittingly in tow.  After a storm, the two of them find themselves in Paradise Falls, and we’re locked into Act 2.  This is also the point of no return, as they have landed, and we’ve established that they have no compass to guide their way.  In addition, when Carl sees Paradise Falls with his own eyes (from some distance away), he knows he must march on.

The first sequence of act 2 is where must of the ‘fun and games’ takes place.  This is when we meet Kevin and then Doug, and we learn more about these two side characters as well as what their existence implies.  In this case it teases the presence of Charles Muntz.  Muntz is also teased more as a force of villainy when we meet the other dogs who seek to hunt down Kevin.

We get to the midpoint when Carl and Ellie share a tender moment during a rainy night.  By this point Carl has gotten over his dislike for the two comic relief characters and accepted them as part of their unofficial gang.  Before, Carl only saw them as obstacles to his single-minded goal to get to Paradise Falls, but he’s starting to open up.  In particular, he opens up to Russell who tells him more about where he comes from and alludes to his parents’ divorce.  We see Carl soften, and now he looks at the boy differently.

In the second half of the movie, our team of heroes, now unified, meets Charles Muntz.  At first he is presented as a good guy.  The dogs show up, take our heroes back to Muntz’ layer, and then Muntz welcomes them into his spectacle of a home.  Kevin has run away at this point, and when Muntz tells them about the bird he’s searching after, we see Carl start to recoil.  His allegiances are to Kevin and Carl, and he’s clear-eyed enough to see that Muntz is a madman.

Carl and Russell escape, but this sequence (usually number 5 out of 8 total in a conventional script) ends when Muntz captures Kevin.  What follows is the ‘dark night of the soul.’  Not only have they lost Kevin, but Carl and Russell turn on each other.  Russell is angry that Carl gave up, and Carl returns to his starting point, stubborn and bitter.  He nearly lost his home (which Muntz attempted to burn down), and he blames all of this on Russell, pointing out that none of this would have happened if Russell wasn’t around.

This is also when we get the “new information,” which spurs the protagonist to act, thus propelling us into act 3.  The new information is a quiet sequence, almost as melancholic yet heartfelt as the early montage of Carl’s and Ellie’s life together.  He looks through their book of memories but discovers a page he somehow hadn’t noticed before.  In a section labels “Stuff I’m Going to Do,” Ellie included a series of photos of their married life together.  She then wrote “thanks for the adventure, now go have a new one,” and Carl realizes this is the adventure.

He needs to catch up to Russell who has decided to float away (with balloons and a leaf blower) to save Kevin, so Carl has to literally let go of the past by dumping all of the furniture and relics in his home to make the house light enough to lift off the ground.  It’s a wonderful moment that makes practical sense given the rules of the story world (that a house could even float) but which also has such a thematic importance about living in the moment and doing away with regret.

The third act is an action-packed sequence up in the air between all of our heroes.  There is too much to recap, but there are so many small moments which pay off earlier set ups, from the “cone of shame” to “SQUIRREL!” to Muntz’ and Carl’s fragility due to their age, to Alpha’s broken voice box, to the dogs’ love for a tennis ball, etc.  All of these small moments re-enter the story, and we’re left with a beautiful, entertaining set piece that is more than just action.

So, Up is pretty great.  It’s a thrilling story that is likely to make you cry and then laugh at some of the sillier, broader moments.  Like many Pixar movies it’s a pretty innocent story with real heart and emotional depth that not many other films can capture.