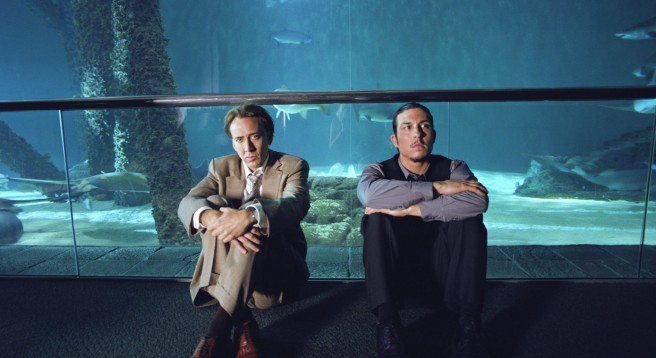 Nicholas Cage and Werner Herzog both go over the top here, and I suppose it’s kind of wonderful, so long as you can stomach it.  Bad Lieutenant takes place in post Katrina New Orleans, following Terence McDonagh (Cage) as he begins to break from reality.  McDonagh challenges the viewer, as if to see what we’ll put up with.  He’s a man lauded as a hero at the beginning and the end of the movie, but in the middle he’s an absolute mess.

McDonagh sexually assaults one woman, constantly pimps out his girlfriend, steals drugs and plants others, intimidates a college athlete into throwing a game, but he dog sits for his father, so it’s not all bad.

Bad Lieutenant is a relatively conventionally plotted movie, but considering this is a Werner Herzog movie, you know he’s concerned with more than just the story.  Herzog is a nihilist with 68 directing credits to his name.  He has alternated between narrative features and documentaries dating back to the late 60s, and if there’s a common theme in his work, at least from what I’ve seen, it’s that the world is a cruel place.  Going a step further, he’ll often put himself in the documentaries, whether just with narration or by actually placing himself on camera.  Herzog has something to say, and he’s going to make sure you know he’s the one saying it.  A Herzog movie is as much about the director as it is the subject on camera.

So with Bad Lieutenant you know to be on the lookout immediately.  This isn’t just another zany Nicholas Cage performance or another anti-hero story.  Herzog simply takes these malleable elements and uses them to better serve the story.  Suddenly Cage’s increasing lunacy isn’t just another “look how crazy he is!” moment, but rather something much more haunting.

First, Cage has a history of swinging for the fences, whether in Face/Off or The Wicker Man or Con Air, Leaving Las Vegas and maybe The Rock too.  If you do a quick search online, you’ll find clips of him ranting and raving, so much so that you start to wonder if this isn’t just who Nic Cage is.

Here he gets to do all of that and even try on a new voice which seems to slowly change throughout the movie.  McDonagh suffers a back injury that necessitates an opioid prescription, and pretty quickly he finds himself snorting, smoking and popping just about everything he can get his hands on.  By the end of the movie, his eyes have sunken further into his head, and he looks like a Tim Burton stop motion animation puppet.

It’s quite the image, and there’s not much fun about it.  It’s one man’s descent into some kind of hell, told under the superficial movie plot, a relatively mundane (as far as movies go) investigation to find the man who executed five immigrants from Senegal.  Sure, the scene is grizzly, and it may be hard to stomach, but McDonagh navigates the scene like a seasoned pro.  When he arrives, the dramatic question of the film has nothing to do with the crime scene but rather with McDonagh’s fragile existence.  We see him snort cocaine in his car, right outside the crime scene, and then we watch him jitter throughout the house as the camera (a frequent use of steadicam) glides along with him.  The steady movement of the camera helps contrast with McDonagh’s edgy presence.

It seems odd that no one mentions or notices McDonagh’s clear drug addiction.  Pretty early on he’s a mess, and you continually think he can’t get any worse, at least until he does.  His partners don’t notice or care to comment on this, and maybe this is a reflection of Herzog’s attitude that no one’s going to pick you up on the way down.

McDonagh is a hero, awarded a medal in an early ceremony, but he’s on his own throughout the movie.  We watch as just about everything starts to go against him (understandably considering his actions), and then we watch as he manages to turn it around, all on his own.

When he’s not working on the murder investigation, McDonagh bullies people for drugs, intimidates a couple elderly women connected to an important witness who has fled town, and he harasses his girlfriend’s ‘clients’ when they don’t pay or don’t treat her fairly.  Oh and he’s several thousand dollars in debt to a bookie.

These actions eventually get him put on probation, and this pushes him into a deal with Big Fate (Xzibit), the man investigated for the five murders.  We’re led to believe that McDonagh is willingly switching sides, going to Big Fate as a police informant in exchange for enough money to pay off one of the many people to whom he owes money.

Look, the interweaving plots start to get complicated.  The point is that McDonagh has his back against the wall.  He owes money to multiple people, is on the outs with the police force, and he remains a crippled drug addict.  Still, somehow, he manages to orchestrate a series of moves like he’s Sherlock Holmes which serve to pay off all his debts and get Big Fate arrested for the five murders.

In the end, McDonagh is promoted to Captain in a ceremony mirroring the one at the beginning of the film.  Oh and his girlfriend is pregnant, and they’re both off drugs.

Everything has turned out well!  Almost too well considering what we’ve seen McDonagh do throughout the film.  Sure enough, we find out that he’s not yet clean, but a man stumbles upon him who reveals himself to be the prisoner from the movie’s first scene.  The man tells McDonagh that he saved his life, and he offers to help McDonagh out, wanting to repay the favor.

The movie ends with McDonagh and the man sitting against a giant fish tank, high, as McDonagh asks, “do fish have dreams?”

So, what is there to make of this?  It certainly feels like Herzog putting himself back into the story, very much at the forefront.  We watch the plot unfold and all the set ups pay off, but suddenly, with that out of the way, Herzog is free to end this as he pleases.  The plot machinations are really just obligations of the genre, and once Herzog clears his deck, he has us and can say whatever he pleases.

In addition to this oblique final scene, there are a couple of moments which really stand out throughout the film.  In one, McDonagh becomes obsessed with a couple of iguanas, and in the other, McDonagh watches as a man recently murdered begins to break dance before being shot down for good.  These moments would seem to be more than just a depiction of McDonagh’s insanity.  They mean something, and they feel like moments from a Herzog documentary.

The camera films the iguanas (and early on an alligator) with a different type of camera or at least a different type of lens.  The effect is like shoving a GoPro right up in the creature’s face, and now we’re forced to study them like this is an episode of Planet Earth.  Maybe the idea is that this whole film is a study of McDonagh (and a city as a whole) much in the way we might study something in an anthropology course.

Who the hell knows?

Bad Lieutenant is a grim film with a man who really tries our patience.  There isn’t much to like about Terence McDonagh.  Instead the allure seems to be the spectacle of his downfall.  How far will he fall and how sensationally?

The film is aesthetically beautiful, filmed almost entirely on some kind of steadicam with a wide angle lens, allowing the camera to smoothly push through these ravaged environments.  The effect is to stitch together all of these locations, making the world feel incredibly dynamic and lived in.  We’re not simply cutting from one set to another, we’re actually in this world.  It also starts to feel like we’re in a maze at some point.

This shooting style is oddly dreamy.  The camera floats in a way McDonagh cannot.  While he trudges, limps and struggles through the world, the camera is unattached.  This is the perspective of an audience not restrained to this landscape as McDonagh is.  Hell, maybe it’s supposed to feel like we’re floating like fish, as if we’re visiting a sunken, forgotten city such as Atlantis.

The New Orleans of this film is all but forgotten.  It’s not glamorous in any way, and it’s either dead or dying.  McDonagh’s pain might as well be a personification of the city’s as a whole.  He suffers but makes it out more or less okay, as the city will (and did), but the scars remain.