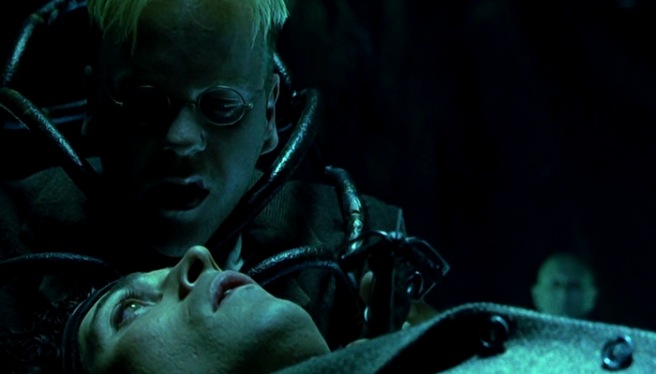 So Dark City is on Roger Ebert’s ‘Great Movies’ list, and that’s about the only reason I watched it.  I’m not particularly drawn to high concept, sci-fi movies like these even if they’re the types of stories I aspired to write in high school.  Creating the rules of an entire universe is exciting, but more often than not these stories feel a little cheap and underwritten.  You not only have to establish the characters, goals, conflicts, etc. but you also have to explain to us how this entire world works.  The result can sometimes be a bit of a mess.  Characters only serve to move the plot from point to point, reducing them to pawns who occupy the story rather than who drive it, and Dark City is no different.  That all being said, Dark City might be great if you appreciate what it’s trying to do.  The shortcuts and drawbacks of this kind of genre, while still present, don’t necessarily make the movie bad.  It’s just more of an acquired taste.

Like the television show Lost, this movie sets up a bunch of questions you want to see answered.  Because the focus is on the mystery, the characters are full of cliches, made recognizable by familiar tropes and characterizations.  We understand our protagonist, John Murdoch (Rufus Sewell) because we’ve seen other movies and understand the genre.  In this case he is a man with no memory who appears to have murdered a prostitute.

John lives in a hard to place city.  It’s always night, and it looks like it could be set, at times, in the 1940s or the 1980s.  All of the clues are meant to throw you off because this is a city that exists outside of our reality.  It’s a world, we later learn, floating in space and run by a dying alien species hoping to study our way of life.  This is where it gets interesting.

Something in Ebert’s review of this movie stuck out to me and reframed how I saw this entire film.  I will continue to describe it in the way I originally saw it, but I just want to set this up because there is a certain tragedy to Dark City that is easy to miss and which I certainly did miss.

John has no memory of who he is because none of it is real.  The aliens imprint the humans every night, giving them new memories and identities in order to see how they change.  While John was supposed to be imprinted he woke up, throwing off the process. So while everyone goes about their day as they think they’ve always done, John is truly awake.  He’s only one of two people who question their reality, wondering why no one knows how to leave the city and why it’s always dark.

We learn about the aliens before John does, but we don’t immediately understand their motivations.  They live underneath the city (something like Metropolis) and appear overly sinister at first.  They don’t mean to torture or even control the humans, as we might have suspected, but rather to study them like rats in a maze.  The aliens want to identify the human soul and figure out what makes us us.

They give us new memories every day in order to see what sticks.  John, our hero, is uncontrollable and even demonstrates kinetic powers, but this is what the aliens want to see.  He is the first instance of a test yielding a result, and the answer to their search for the soul lies in John Murdoch.

On the surface this is a pretty silly movie, but the questions it works towards, the underlying themes, are quite compelling.  As I mentioned earlier, the movie has a lot of world building to cover so scenes are incredibly brief, and character dialogue only serves to move the story forward.  For that reason the characters are kind of frustrating.  They’re not human but rather remixes of existing movie character types.  In a way this kind of adds to the alienation theme.  No one makes sense to John because he can’t even make sense of himself.  We feel as out of place as he does, also just because this world is unlike anything we’ve ever seen.  I should note that the practical and computer effects are pretty amazing, especially for this time.  This is a movie that might not hold up as well today as 1999’s The Matrix, but seeing as how it preceded that film, Dark City was a little ahead of its time.  In fact, many of the sets were recycled and used in The Matrix.

Dark City has grand ambitions that I didn’t recognize right away, mostly because the acting and writing is kind of a slog.  These characters are boiler plate archetypes with little to make them compelling.  They are a series of screenwriting algorithms and formulas, kind of like the humans are within the story, their memories constructed by a doctor (Kiefer Sutherland doing his best Nazi scientist impression).

It’s only after seeing the film and particularly after reading Ebert’s review that I admire the movie as much as I do now.  I still think Dark City would work better in prose, whether as a short story or a novel.  The movie is certainly well-made, but again, because of the necessary world building, we’re never given time to empathize with these characters.  The dramatic question always has more to do with the world than with Murdoch.  He’s not unlikeable, just a little bland.

And yet, even as I write that, it all kind of feels like the point.  These characters are human but also not really.  Who knows where they came from or how they ended up here.  All we know is that their memories are illusions and their origins unknown.  They exist only in the present moment, their behavior influenced by chemicals given to them.  So if they’re human, what makes them human?  That’s what the aliens want to know and what makes the movie as ultimately engaging as I found it to be.

The aliens are creepy, right off the bat.  They sneer in a way which feels a little misleading considering their motivations are not as sinister as we are originally led to believe.  Framed from the humans’ perspective, as the movie is at the start, they are ostensibly the villains, the antagonizing force which seeks to control our protagonist.

But their goal is just to understand the humans.  They want to know what it is that they (or we) have that they don’t, and within that pursuit they hope to ensure their own survival.  As the movie builds towards its climax, Murdoch and a couple other humans fight back against the aliens.  There is a confrontation, an all is lost moment, a fight, and in the end Murdoch wins and the aliens are killed.  The sun finally comes up, and the humans live happily ever after in a world Murdoch now controls.  He’s God.

But as Ebert notes, this story is much more tragic if framed from the aliens’ perspective.  I’ll just quote him:

“The Strangers are not evil. They simply proceed from alien assumptions. They are not even omnipotent, which is why Murdoch, Bumstead and Schreber have relative freedom to move about the city. At the end, we feel a little sorry for them. They will die surrounded by happy beings whose secrets they could not discover.

Notice an opening shot that approaches the hotel window behind which we meet Murdoch. The window is a circular dome in a rectangular frame. As clearly as possible, it looks like the “face” of Hal 9000 in “2001.” Hal was a computer that understood everything, except what it was to be human and have emotions. “Dark City” considers the same theme in a film that creates a completely artificial world in which humans teach themselves to be themselves.”