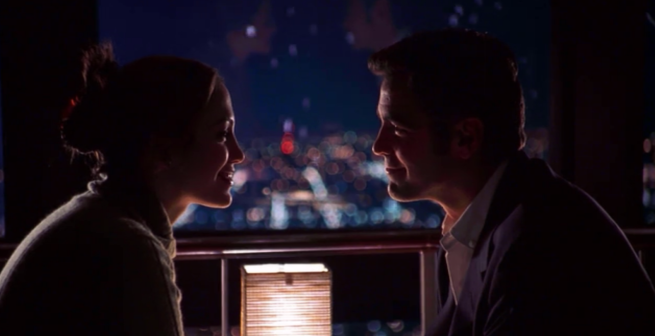 Steven Soderbergh is a strange director in that he’s ostensibly an auteur, one of those artists whose name looms under the title of each of his films, but he also works so often within different genres.  Out of Sight is a fine but mostly forgettable movie about a bank robber and the female FBI agent who tracks him.  They have a brief affair, even as they toe opposite lines of the law, and that seduction is the main thrust of the film.  It’s a sleek heist movie with multiple timelines, handsome movie stars, sex and violence.  It’s a movie I imagine a studio would be in love with simply because it contains all the marketable traits of a financially-successful movie.

Soderbergh is an accomplished director who made Ocean’s Eleven and its two sequels as well as another 2017 heist movie, Logan Lucky.  These movies fulfill the promises of the genre in which they reside without doing much to challenge the audience.  Soderbergh knows how to make a good movie, is all.  He does have more challenging, experimental works such as Sex, Lies, and Videotape (1989) and his tv show The Knick as well as many other works I haven’t seen.

But Out of Sight, as I see it now, is a well-made conventional movie.  According to box office mojo, it was by far the most financially successful movie at this point in his career and would precede a series of movies that grossed over $100 million.  Maybe he made Out of Sight as a way to prove he was a financially viable director (from the studio’s POV) so he could make more personal projects.  Maybe he had just made too many personal, underwhelming at the box office movies and this was a way to remain in the studio system.  I don’t know.

You know what?  I’m going to put this review on hold and watch the 5 Soderbergh movies made between his first, Sex, Lies, and Videotape and this one.

Okay it’s a day later and I realized I’m going to forget a lot about this movie if I wait long enough to watch those other Soderbergh movies.  I’ll get to them, but I might as well finish discussing at least the plot for Out of Sight.

We start with a frustrated bank robber named Jack Foley (George Clooney).  He’s disgusted with something and so tears his tie off out of anger.  Then he proceeds across the street to a bank and becomes a smooth operator, quietly ordering a teller to give him thousands of dollars under the threat of violence of supposed co-conspirators.  Clooney plays the part well, essentially the same character he would played in Ocean’s Eleven, before calmly walking out to a crappy car that won’t start.  He’s then arrested, and this opening scene creates a compelling, strange character.  He’s as handsome as George Clooney and as suave as we imagine George Clooney is, and yet he’s a poor planner who falls on his ass.

Pretty soon Jack Foley escapes from prison with a number of other prisoners who are either captured or shot.  Their demise, though not necessarily part of the plan, do seem to directly benefit Foley.  He is met by a friend, Buddy (Ving Rhames), but they are interrupted by FBI agent Karen Sisco (Jennifer Lopez).  Buddy and Jack accost her and steal the car with Jack and Karen stuffed in the trunk.

What follows is a strange scene in which they quietly drive away while the two leading actors flirt in the trunk, bathed in a romantic or violent red.  I mean, this is a prison escape, but there’s no real drama to it past a certain point.  The real driving force of the scene is the mutual attraction between Jack and Karen.  It’s a kind of Thomas Crown Affair romance, like the one in that movie between Steve McQueen and Faye Dunaway.

Anyways, Jack gets away partially because Karen lets him.  They are then on separate tracks, only briefly crossing paths.  Karen is shoved to the side by her male FBI cohorts, and Jack gets ready to rob a wealthy man he met in prison.

There is also another friend, Glen (Steve Zahn) who has all the information on their burglary target but who gives this same information to a rival ex-con, Maurice (Don Cheadle).  Okay, look, there’s a lot going on, and we jump backwards and forwards through time so that we learn why a character is doing something after we see them do it, at least for the most part.

Midway through the movie we learn why Jack was so frustrated at the start of the movie, for example.  That wealthy man Jack met in prison, Richard (Albert Brooks), had offered him a job, which Jack thought to be a cushy one but turns out to be for a security guard position.  Insulted, Jack impulsively robs a bank, goes to jail, then comes out the other side with a plant o rob Richard.

I never really cared about this plan, but I don’t think we’re supposed to.  The real focus is the romance between Jack and Karen, but again we only see them together in a. handful of scenes.  It’s the promise of romance that looms large over the course of the film.  She is mostly tracking him from a safe distance, then conferring with her father (Dennis Farina) about her attraction for the man.  It’s really odd.  Does anyone actually talk so openly with their father about such infatuation?  Particularly when it involves a convict?  The film mines some humor from these interactions, specifically by calling attention to her father’s knowledge of a previous relationship Karen had with a married man.  It’s all a way of acknowledging (or lampshading) the absurdity of this romance, between an FBI agent and a criminal on the run.

Basically everything leads to a showdown at Richard’s large mansion on a snowy night.  All the main characters are there, including the two rival groups who want to rob the wealthy man.  It’s a pretty terrific sequence if only because of the spectacle.  There’s a shootout, almost everyone is killed, and one henchman trips on the stairs and accidentally kills himself, the trigger pull a mistake as in that car scene from Pulp Fiction.

Okay, that’s it.  I don’t know what else to say.  This is a fun movie but it’s just so damn strange because of how much the characters play it straight.  I mean, what else are they supposed to do?  It’s a movie for everyone, I suppose.  You have the bank robbery, prison escape, armed robbery and general violence of a dude movie, and you have the sappy, melodramatic romance of a chick movie.  Dude + chick = money.  This movie was Soderbergh’s highest grossing one at this point in his career, and it seems to have been the first in a series of similar movies, mostly the Ocean’s Eleven movies.