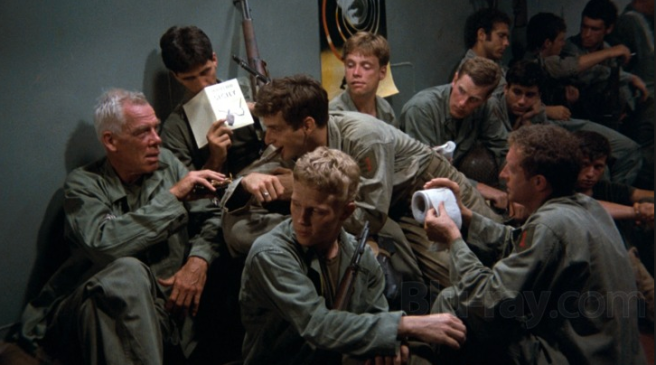 The Big Red One might be the strangest war movie I have ever seen.  It follows a group of young soldiers and their Sergeant (Lee Marvin).  The Sergeant, who is given no name, is an older, battle-tested man while his younger soldiers are like students, untested and cautious.  The movie is occasionally funny and feels like one of those old summer camp movies.  The Sergeant might as well be their school’s dean and the young men the lackluster remnants of The Breakfast Club.

It doesn’t quite make sense why they’re together.  The Sergeant, if he’s as legendary as he seems, should be in command of a much larger unit, but as it is he and his small group of soldiers trek around Europe with what feels like little rhyme or reason.

The story is narrated by one soldier who describes their journey and who serves as the surrogate character for director Sam Fuller himself.  This character is a novelist, and his recurring voice over provides the only real structure of the film.  This framing device similarly makes this film feel like a more adult version of Stand By Me.

The Big Red One is extremely innocent, even as it depicts some truly awful violence.  The narrator reminisces about the unit’s time together as if these were the good old days.  If other war movies mean to show the true horrors of war, this one shows the fraternal bond among men who survive the war.

Because of that tone, the film is surprisingly whimsical.  Characters bounce around from mission to mission, hopping from country to country.  The account of their journey is described from the point of view of someone years removed from the war, even as they’re currently experiencing it.  Again, this perspective comes from Fuller himself, and it gives the film a certain amount of wisdom, kind of like in a Richard Linklater movie.  His movies often depict the ups and downs of youth but come from the perspective of a man ten or more years removed from that time of his life.  In both cases that vantage point allows for a kind of calmness of the narrative, even as the men risk their lives here in The Big Red One.

You’re never really concerned that any of the main characters will die.  Men are introduced only to be killed off, as a way of demonstrating the cruelty of war, but the unpredictability it’s meant to imply instead works in reverse.  We expect these characters to be killed because they are just cameos in the story of our protagonist and his unit.  You can picture Fuller describing his experience of the war and mentioning certain soldiers only because they died.  Their purpose in this movie is to be killed and thus to demonstrate the consequences of war.

This allows our protagonists to march their way through much of Europe and live with a kind of whimsy.  They aren’t party animals, taking out their existential dread in bouts of binge drinking, and they aren’t militantly focused on the task at hand.  They just go about their duty as best they can, occasionally express fear and mostly talk about life away from the war.

It’s striking that the depiction of war in this movie feels like a depiction of summer camp.  We follow the characters through various important moments of the war, including D-Day and the eventual liberation of the concentration camps, but the story never really addresses the gravity of those situations.  Maybe that’s because they’ve only grown more grave with time.  As a soldier in these moments, perhaps it was hard or even impossible to grasp the severity of what was going on.  These were just kids, after all, and to them it might as well have been summer camp but with slightly different rules.

The looseness of the narrative allows us to jump quickly through time and hop among many locations.  It’s as if a kid is remembering all that happened in his last year of school, with little connecting each scene except for a brief narration catching us up to speed.  In one moment they’re in the deserts of North Africa and in another they mow down the Germans who have occupied a mental institution in France.  In another sequence they liberate a small town in Sicily and then enjoy a well-prepared meal by the thankful townsfolk.  There is as much a focus on the joyous times, between the horrors, as there is on the violence.

In other war movies the enemy might be rarely seen onscreen, in an effort to make you fear the unknown as much as the characters do, but in The Big Red One we meet the German soldiers before the Americans do.  They are meant to be intimidating, but between their boiler plate Nazi-ism and the fact that they’re speaking English, they hardly feel like anything to be scared of.  The result is that everything just feels a little watered down, but again maybe that’s what happens with the benefit of hindsight.

When you’re remembering something from your past, whether good or bad, there is a certain inevitability to what happens.  If you recall a particularly tumultuous year of your life, you might recall the specific events as destined to happen.  You remember how you handled it, but you don’t remember ever not expecting it.  Does that make sense?  Maybe I’m speaking out of my ass, but I get the feeling that our hindsight gives us a certain omniscience, and our memories become rigid and predictable.

If that’s the case, it might explain the nature and tone of this story.  There is little suspense as to what will happen to the main characters (even when the Sergeant is shot through the back you know he’ll return, and he does so triumphantly), and there isn’t much focus on the risks of war.  It’s just a fact of life, and it’s just something that happened.

The Big Red One, then, is a war movie that doesn’t seem to have lofty aims with this movie.  This isn’t an anti-war movie or even a political movie.  It’s just a story about the bonds made amongst these soldiers during trying times.  The movie ends with another voice over by our protagonist while we see clips of the men during happier times, already glimpsed throughout the movie.  There is a distinct nostalgia at play here, and that tone sometimes directly contradicts what we see onscreen.

This is why I found the film to be so strange.  It depicts some truly horrifying moments, but the characters never seen to grasp how dangerous they are.  They just live and let live, for the most part.  The unit’s journey ends with the liberation of the concentration camps, and it’s the most harrowing part of the movie.  The tone of this sequence reflects the horror of what the characters find, but it’s almost straight out of an entirely different movie.

One character (played by Luke Skywalker himself) finds the bones of a long-dead prisoner, and he’s appropriately horrified.  He then comes across a hiding German soldier and shoots him… repeatedly and slowly… a lot.  He’s mindless as he almost casually fires rounds into the man, one at a time and with plenty of time in between.  The soldier’s lonely gunfire echoes throughout the camp like a death knell.

The Sergeant finds a young boy, starved and near death, and he forces him to drink water before giving him an apple to eat.  They sit in the shade of a pleasant tree before the Sergeant gives the boy a ride on his shoulders.  It’s a nice moment, but then we see the boy slump over and die right there, and the narration returns to tell us that the Sergeant continued to walk around for thirty minutes before burying the boy.

This is a gut punch because it seems to come out of nowhere.  Yes the boy was near death to begin with, but he appears to get better, and the oddly innocent tone of the movie anticipates a similarly innocent ending.

In The Big Red One you’re more likely to find a scene of the men sitting around in leisure, discussing what’s happened and what might soon happen, than you are to find them stuck in battle.  This is a war movie that focuses on the bonding time in between the memorable battles, and it’s a war movie that celebrates the fraternal bond that was surely imperative to the survival of so many of the soldiers.  Without it they’d likely have gone mad.  Sam Fuller shows that the soldiers were fighting for each other because it’s all they had.  There is never any depiction of the war outside of their experience or of the politics or even of their lives before and after the fighting.  They might as well exist in their own vacuum, away from the rest of the world.