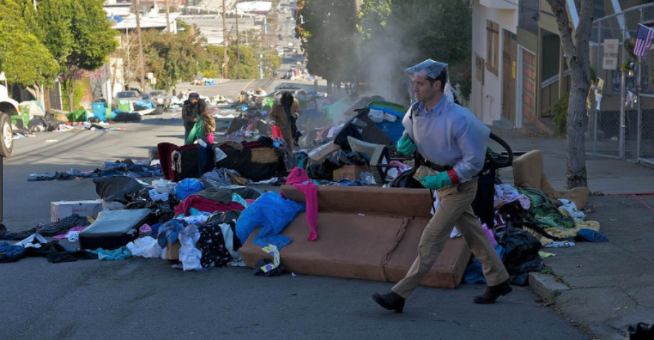 Contagion is an attempt at deadly realism, tracking a disease with about a 25% mortality rate over the course of a few months and through several different continents.  The film jumps between countries and characters, tracking those affected and those responsible for coming up with a cure to a virus which eventually takes the lives of over two million people.

This is a disaster film not too unlike The Day After Tomorrow or even Deep Impact except that the threat is invisible.  Contagion makes you want to wash your hands as much as Jaws made you want to stay out of the ocean.

In order to follow all the unique angles of a situation like this, the story keeps up with characters who are affected by the disease and seek to profit off of it.  We keep tabs on a family man in Minnesota (Matt Damon) after his wife (Gwyneth Paltrow) is the first known victim of the disease.  We observe the CDC’s rush to find a cure, a blogger’s attempts to profit off false cures (Jude Law) and the general mass panic as well as the government’s desperate attempts to stay ahead of that hysteria.

So though there are characters with whom we are meant to identify (everyman Matt Damon), the real focus is on humanity as a whole.  If there’s one antagonist, I suppose it’s mob mentality.  You know, it’s like any movie where the real villain is one waiting in the wings.  In Black Panther we’re made to believe that Ulysses Klaue is the villain until he’s killed, and Erik Killmonger takes the reigns.    Or like in Wonder Woman with General Erich Ludendorff giving way to Ares, or in Game Night with the thieves giving away, oddly, to Michael C. Hall or in Geostorm, you know what that’s enough of this sh*t.

The point is that the hook of the movie is the deadly virus and what that could do to humanity.   Though it is most certainly deadly, however, the virus is much more slow moving than we anticipate, given that this is a movie.  It’s extremely frightening in a real world circumstance, as if presented in the film, but we’ve watched movies, seen zombies, and plagues typically move faster than they do in Contagion.

Once news of the virus spreads, the real antagonist becomes mass panic.  There are riots, robberies, murder and fearmongering, showing that, I think, humans are themselves some kind of plague.  We are self-destructive as well as self-constructing (?).  We are Martin Shkreli as well as Tony Robbins, Adolf Hitler as well as anti-Adolf Hitler, Ferris Bueller as well as Lisa Simpson, early-career Robert De Niro and late-career Robert De Niro, reality tv as well as educational documentaries, John Wilkes Booth the shooter as well as Abraham Lincoln, Tommy Wiseau as well as John Wilkes Booth the stage actor (assuming he was a good stage actor), the Divergent series as well as the first Hunger Games movie, the dentist who shot a lion as well as the dentist who removes cavities and doesn’t overcharge you.

Contagion is a great movie.  It’s thrilling and dramatic, but there’s also something oddly silly about it.  I can’t really put a finger on it, because this is by no means a comedy and within the first fifteen or twenty minutes there is a dead child staring us in the face.  Still, the movie is told with a strange, delightful objectivity.  There’s something in all of this that tells me we deserve it, like this deadly virus is inevitable, just the price of doing business, meaning being alive and on earth.

The characters aren’t unlikeable, exactly, but Steven Soderbergh never works too hard to make us like them.  It doesn’t even really matter if we like them, and taking a step back, the ways in which we see these characters has little to say about who they were before the panic began.  This mass hysteria changes us and encourages people to resort to their more basic instincts.  Most of this is seen within the mob mentality, the group desperation to get vaccines, food and to turn on anyone they can blame.  We want not only to live but also to put someone else down.

This good/bad dynamic is shown through the CDC and the blogger.  Laurence Fishburne plays Dr. Ellis Cheever of the CDC.  He’s looking for a cure, but he also has so many hoops to jump through.  They need to recreate the virus in order to test possible vaccinations, then they have to go through multiple trials before the drug can be packaged and sent out for consumption.

His antithesis is Alan Krumwiede (Law), a San Francisco-based blogger who is all about questioning existing power structures.  He fakes his illness in order to suggest that he’s found a cure.  This causes an immediate demand for that ‘cure,’ and on national television he debates Cheever, calling him corrupt because Cheever jumped in front of a Chicago quarantine and warned his wife to get out.

It’s only later that we realize Krumwiede lied to millions os unique visitors to his site, profiting off of the alleged cure.  Cheever eventually comes out on top, simply by doing his job, but the stains on his reputation remain.

There are other characters we briefly meet and keep an eye on, but they don’t really seem to matter.  Soderbergh has a machine-like quality to how he shows these characters.  They show up, make their presence felt, and then we move on.  When Marion Cotillard is kidnapped by a man hoping to get the vaccine for his small village, we don’t return to her until she is freed, months later.  We similarly meet Roger (John Hawkes), a janitor at the CDC who hopes to get the vaccine because of his personal relationship with Cheever.  He does, and that’s that.  There’s Dr. Erin Mears (Kate Winslet) who is sent to Minnesota and Chicago to research the virus before she gets sick.  Because she’s ostensibly a main character, and because she’s Kate Winslet, we’re led to think that maybe she might survive.  In one subtle cut we watch as she is buried in a mass grave, no sentimentality in sight.

The effects of such a widespread deadly virus can only dehumanize us.  We’re told that over two million people died around the world, and it’s impossible to visualize that number.  Those are two million unique people dead, and we only see them as numbers.  Soderbergh manages to convey that same perspective over his characters.  They are vivid, but we often get to know them so briefly before moving on.  The movie will end with the only sentimental moment of the film, one which felt a little odd and out of place, in which everyman Matt Damon organizes an at home prom for his daughter and her boyfriend.

But then we quickly move on and finally witness how the deadly virus spread, from bat to pig to cook to Gwyneth Paltrow.

Between the cinematography, electronic and pulsating score, this feels like a David Fincher film.  His films too seem to emphasize style over substance, while not taking away from the content of the story.  In Fincher movies and in this one, the camera has a mind of its own.  Everything is sleek, and it helps add to this omniscience of the camera.  There is a storm brewing, and we move quietly through it.  This is why characters die without much commentary and everything plows forward even as the bodies pile up.  Sure, this is awful, but there’s no time to waste or to reflect.

Contagion, in its scope and tone, reduces us to numbers, because that’s all we really are.   It’s a haunting movie full of dread.  It isolates its characters before killing some of them off.  That being said, most of the recognizable cast survives the epidemic, and there are moments of quiet humanity between characters, whether father/daughter x2, husband/wife or boyfriend/girlfriend.