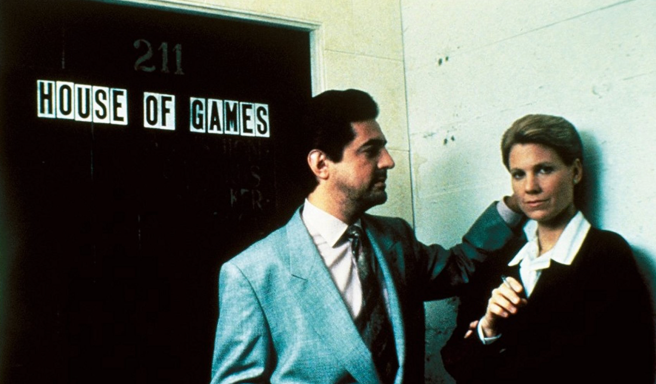 House of Games is one of those movies about a con man in which the audience itself is supposed to be fooled.  You see this in Christopher Nolan’s The Prestige and in a movie like Now You See It, and such sleight of hand is a tricky thing to pull off.  There are similarly huge twists in movies like The Sixth Sense that hinge on fooling the audience.  Sometimes these work brilliantly, but other times they don’t work at all and require an extreme dumbing down of characters and their behavior.  The best example would be Mark Ruffalo in Now You See It.

I can’t really tell if it worked in House of Games, but the movie kept me guessing.  So I suppose it worked.  I was much more intrigued as the story went on, and the continuous reveal that what we just saw was part of some complex plan made the story much more interesting.  I think it might’ve been because I found so much of the character behavior forced and the coincidences one too many.  When you realize all those coincidences were deliberate it makes much more sense, but then you catch yourself going over just how many genuine coincidences the con men were counting on to make the plan work.

It’s a complex plot but a simple story.

Margaret Ford (Lindsay Crouse) is an icy psychiatrist known for her recent book, “Driven.”  We meet her when a fan recognizes her and asks for an autograph.  It’s an innocent enough scene, but it’s filmed and acted in such a way that I was sure someone was about to die.

There’s something lurking underneath Margaret’s purposefully stoic exterior, like she’s struggling to hide something.  She is that closet door barely holding shut under the weight of a mess the teenager just “cleaned up” to please his parents, and in conversation with a colleague she elaborates on career and life frustrations.

Margaret wants to get involved in the lives of her patients.  She wants to help more than she already may be, and she’s feeling like she isn’t helping at all.  When one patient threatens to kill himself due to a $25,000 debt to a mafia-like guy, Margaret pays a visit to that mafia-like guy, Mike (Joe Mantegna).

We’re made to think that Mike might be something of a Tony Soprano, but he’s not.  The client Margaret is there on behalf of apparently lied about the $25,000 debt, so Mike, as a form of payment for Margaret’s baseless accusations, asks her to join him in a card game where she can spy on his opponent and see if he gives away his “tell,” thus helping Mike win a $6,000 hand.

She agrees, and what follows is a gripping sequence in which Mike loses, and Margaret is forced to pay his opponent, a gun-toting mad man, the money.  She pays close attention and sees water dripping out of the gun.  Recognizing it as a water gun, she confronts the man, and everyone involved reveals to her that it was a con, meant to get her money.

It’s one of those ‘pull the rug out from under you’ moments, and you have to stop and wonder just how in the hell they could pull of such a complex scheme.  Was it the work of genius, or did the film just overlook certain crucial details in the name of a good movie moment?  If you have trouble believing this elaborate scheme, well just wait for the rest of the movie.

Margaret becomes enamored with Mike, and he agrees to show her the ropes of the con game.  It seems she wants to write a book on Mike and his “confidence game,” but she’s also just infatuated with him.  He explains to her how he pulls off all these cons, and this leads to a scene in which she pleads to join him on his next one.  He tries to dissuade her, saying it’ll ruin the plan, but she forces her way in.

That con involves them pretending to find a briefcase with a stranger, ‘realizing’ there is $80,000 in it, and then conning the stranger out of $30,000 of his own money in exchange for a briefcase which will be exchanged with another briefcase, etc.

The plan lasts all night, and in the morning, when everything seems set to work, Margaret spies on the stranger and sees that he’s a cop.  She warns Mike and his co-conspirator, and they try to abandon the situation.  The stranger/cop shows up at just the right moment and tells them they’re under arrest, even pulling a gun on them.  Margaret becomes desperate to flee, and in her struggle the gun goes off, killing the cop in front of them.

Margaret, Mike and the other man then escape only to realize they left behind the briefcase with the $80,000 which was real money they borrowed from the mob.  Margaret offers to pay them the $80,000 of her money so that they can pay back the mob, mirroring that earlier card game scene and suggesting that maybe this is all a con too.

How the f*ck could they pull this all off?  It is a con, if you guessed it, it’s all a con.

Margaret tries to return to her normal life, missing $80,000 of her own money but not as concerned with that as she is that she more or less killed a cop.  She is distraught, tormented, drenched in his own blood.  Then a client visits her, the one from early on who threatened to kill himself and opened the wormhole through which Margaret crawled and got involved with Mike.

Margaret is confused as to why he would suddenly show up, only to explain that he has to cancel the next day’s appointment, so she follows him down the street and sees him get into the same red convertible which Margaret helped the other men escape from the con gone wrong.

She then goes down to a tavern at which she observes Mike and many familiar faces laughing about the successful con, all at Margaret’s expense.  She is livid, despondent, etc.  Margaret realizes her whole life has been a lie, everything from the day she was born—- or just the last couple of nights.  Yeah talk about a wild week, Jeeze.  She meets this guy and within two days she has fallen in love and had him steal $80,000 of her own money.

So Margaret is determined to get back at him, but because of how easily she eventually caught on to their lie, you wouldn’t be wrong to think that even this is somehow part of the con, that they want her to get riled up and seek revenge.  It all leads to the movie’s climax where Margaret tries her own con on Mike but he catches onto it.  She point a gun and asks him to beg for his life.  You might still be thinking that this is somehow part of Mike’s plan, but then she kills him.  And he’s definitely dead.  Right?

Damn, what the f*ck.

So when you zoom out, this is a story about a successful psychiatrist/writer who was fooled, and because she was so embarrassed and ashamed she killed the man who did it. It’s one of those endings that made me wonder if I’m supposed to be rooting for her.  I mean, I certainly wanted Mike to get his comeuppance, but that trade off between money and one’s life is kind of imbalanced, right?  He points out that she’s incredibly successful and that $80,000 won’t devastate her financially.  He’s right, so she kills him as payback not for the monetary loss but for what he did to her soul.

So it was all a con, and she was the fool, just as we were.  Again, I can’t tell if this was a genius con or just way too unbelievable.  There are so many moving parts, so many coincidences, so many layers to unravel.  Thinking back on the story there were so many things that had to happen perfectly for the plan to work… and yet somewhere along the way I was hooked.

These kinds of successive cons can be maddening.  In most movies you want to follow a character’s journey, to watch a story unfold and build upon itself.  In a movie such as this, though, the repeated cons might undermine the story itself.  There was no arc between Mike and Margaret, in other words, because everything was predetermined by his inane scheme.  We like Mike, and then we’re told it was all a lie.

So House of Games is thrilling in its own right, but it’s also a head scratcher.  I do admire how uncompromising it is.  David Mamet’s story doesn’t seem to ask that we root for Margaret.  When she kills Mike, it seems clear that we’re meant to realize she may have crossed a line.  The story ends with her deciding to forgive herself and then stealing a stranger’s lighter, suggesting much of Mike has rubbed off on her.  She remains as stoic as she once was, but whereas before it felt like she was looking for something, now it’s as though she’s found something else, and it’s rotting her soul.

So this isn’t necessarily a happy ending because of what it’s done to our protagonist.  In some ways it might be like a noir film.  She’s the jaded detective character drawn into some kind of dark underworld.  She falls in love with the femme fatale, who in this case is the dapper Mike, and in the end she realizes it was all a scheme, it was all a lie, and she goes back out there on her own, as jaded as she once was if not more.  The entire story, then, is meant to confirm her own world view.  In the case of House of Games, though, there is something sociopathic about Margaret in that final scene.  She’s not any kind of character I’d ever want to come into contact with, and the film maintains that eerily icy tone it had in the very first scene.