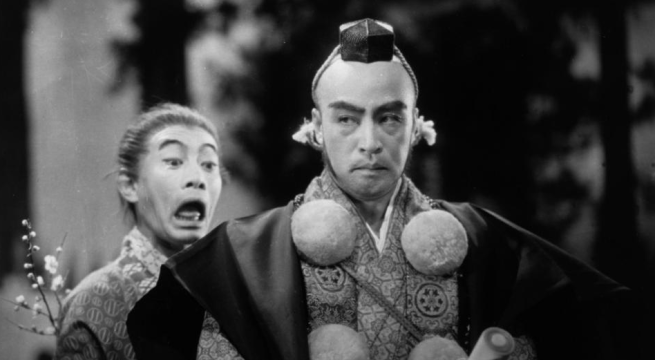 World War II ended before Akira Kurosawa finished shooting The Men Who Tread on the Tiger’s Tail.  The film was made to be short, cheap and suitable to Japanese censors, but when the Allied forces took over they brought with them American censors who considered the subject of feudal Japan to be taboo.  The film was then banned until about 1949 and even then not released until the end of 1952, near the end of American occupation.  It wasn’t until 1960 that the film was seen in America.

This is a story light on plot in which more action takes place in the initial text scrawl than it does in the rest of the film.  The Men Who Tread on the Tiger’s Tail is a retelling of a 12th Century conflict between two brothers, Yoshitsune and Yoritomo Minamoto.  They fought together in a campaign that would make Yoritomo to become the shogun, a sort of military dictator.  Yoritomo, however, began to suspect that his brother was plotting to overthrow him, so he ordered his imprisonment.  Yoshitsune, along with six men loyal to his cause, fled across the border to safety under the guise of traveling monks.

The film’s plot details only one real challenge.  A porter meets the group and volunteers to help lead them across the border.  There is a long, dramatic sequence in which one of Yoshitsune’s servants, Benkei, must lie to protect them, and then they cross the border.  The end.

Throughout the film Yoshitsune is hidden by a large hat, offering him a stoicism matched by his allies.  The group as a whole is on a mission, and there is nothing that will get in their way, and when the porter arrives, he becomes just about the only character in the entire film to show any real emotion.  The porter acts as something like a Greek chorus or just a helping hand for the audience.  While the others remain statue-like, hiding all emotion, the porter wears anything and everything on his sleeve.  In frequent close-ups, separating him from the rest of the group, the porter stretches his face in more ways than I thought possible.  He over-emotes every possible beat, sometimes even looking directly at the camera.

This character is clearly meant for comedic purposes, though the rest of the film is played with complete seriousness.  This is a dramatic film, one that strongly empathizes with the most active character, Benkei, one of Yoshitsune’s servants, and yet every moment seems to be interspersed with the porter’s reaction shots.

Maybe this made the film more accessible, a manner of bridging the gap between the feudal time period and present audiences.  The porter, played by a well-known comedian at the time, certainly has his moments, and he’s the only real emotion to latch onto during what would otherwise be quite the cinematic slog.  Even when the film thrives, enjoying a Hitchcock-like sense of tension conveyed exclusively through the cinematography and editing, we’re still just watching a group of self-serious characters who are trouble to empathize with.

This is a strange film.  The porter character doesn’t seem like he should be involved in the story at all, but because of how light the story is, we kind of need him to have any investment in the story.  If the story were longer, perhaps, with a first act that could show the conflict which forced Yoshitsune and his crew to flee for their lives, we might have the necessary connection to the characters and their plight which would make the porter character unnecessary.  The film could stick to a single tone, and it might just feel less sporadic as a result.

As it is the film feels like a compromise between story and practicality.  The best example of this might be that “because this film was made late in the war during many bombing raids, most of the female staff and actresses had been evacuated out of Tokyo, leaving almost none at Toho, and thus why there are no women in the film.

The Men Who Tread on the Tiger’s Tail is brief and unspectacular, but there is a moment of inspired filmmaking during the only consequential moment of the film, the border crossing.  It’s the only moment in the film where the story feels truly alive.  All the drama is conveyed visually, and it’s the only moment of character-building in the film.  The servant Benkei poses as the lead monk, and when he is pressed to reveal a deed for the Temple he claims they are raising funds to build, he produces a blank scrawl and recites from memory or flat out makes up a believable description of the deed, ensuring their safety.  They are about to get away when someone asks about the other “porter” who is Yoshitsune in disguise.  Benkei’s response is to assault Yoshitsune and chastise him for not carrying enough weight.  The border guards say that the man must not be Yoshitsune in disguise because a servant would never in good conscience beat his lord.

So the plan works, but in the end Benkei expresses the intense guilt he feels for striking his lord.  Yoshitsune tells him it’s all right, and they drink the night away in celebration.

Did I really call a Kurosawa scene “inspired filmmaking?”  Who am I to comment on his work?

The most interesting aspect of this film is the way it ends, with the characters celebrating victory.  The true story of Yoshitsune is that he was eventually captured, and from my limited research of the film it seems this would have been common knowledge amongst Japanese audiences.  I guess it would be like ending a story about Abraham Lincoln as he applauds the introduction of the play at Ford’s Theatre.

This structure adds a whole new lens through which to view the story.  The film would seem to celebrate the temporary peace felt by Yoshitsune and his men, emphasizing its meaning in the face of coming adversity and making everything feel just a little doomed.  The victory within the film, then, might start to feel all for naught.

There’s a bit of nihilism in there somewhere, and the porter character, whose comedic sensibilities might undermine the otherwise self-seriousness of the film, is a way of distancing us from the story.  So what are we supposed to feel?  Some people might feel for Yoshitsune, Benkei and the others while other viewers might instead look at the entire world of the story with mockery, seeing it as through the eyes of the comedian porter whose modern view of the story would reflect our own.