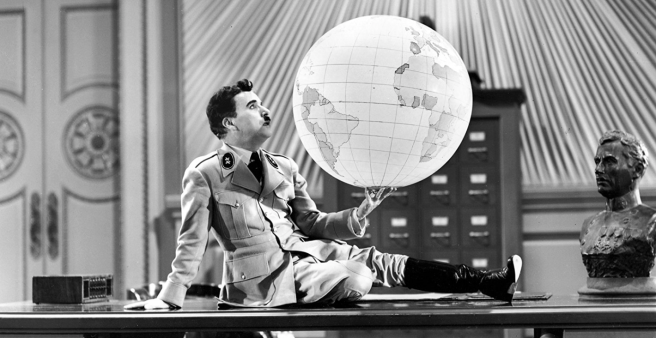 Film critic Stanley Kauffmann said of Charlie Chaplin that The Great Dictator made him the David to Hitler’s Goliath.  Chaplin’s first talkie film, with the last (possible) incarnation of The Tramp, started off as a parody of Hitler and became an act of defiance somewhere along the way.

The film was put into motion in 1938, before Hitler had graduated from a dictator to an outright monster.  When Chaplin announced the film’s production, using $1.5 million of his own money, it became immediately controversial.  Britain initially banned the film, and Hollywood producers discouraged Chaplin from making the film for fear it would anger Hitler.

But Chaplin wanted it to anger him.  He hoped to premiere the film in Berlin.  When President Roosevelt learned of the pushback to Chaplin’s production, he encouraged him to keep going, assuring him that the film would be released.  Production began on the film six days after Germany invaded Poland, starting World War II, and by the time it was released Britain had lifted the ban because, you know, they were at war with Germany too.

It’s hard to imagine just how much was at stake here for Charlie Chaplin.  He was already a legend, complete with the accompanying fame and fortune, and yet he was determined to make this movie.  Not only did he put his own money and possibly his reputation, but he again made use of his famous character, The Tramp.

Chaplin plays two characters in The Great Dictator, a Jewish barber and the dictator of Tomania, a fictional country, named Adenoid Hynkel.  the barber character is ostensibly The Tramp though some disagree, and Chaplin has said this is an entirely new character. Still, the barber dresses and moves like The Tramp, commanding the same empathy as the famous character.

Had this film not gone well it could easily have sullied the reputation of Chaplin’s most famous creation.  Beyond that this is a talkie, meaning Chaplin had the additional burden of translating a career of silent filmmaking to what could feel like an entirely new medium to him.

The Great Dictator is a good movie.  Let me start there.  It’s funny and tragic, both poignant and broad, but it’s also technically polished.  The movie looks more modern than any other Chaplin movie I’ve seen and deftly balances two stories which might feel in opposition to each other.

The story is split between the two Chaplin characters, the barber and the dictator.  The characters will overlap in the final fifteen minutes of the film when the barber is mistaken for the dictator, but for almost the whole movie they remain entirely separate.

The barber’s side of the story is the most heartbreaking.  We watch as the barber suffers under the military state that has become his ghetto before everyone the neighborhood is burned, and the barber is forced into a concentration camp.  There is still the requisite slapstick comedy and a romantic subplot between the barber and a woman named Hannah (played by Chaplin’s then wife Paulette Goddard), but the film doesn’t shy away from the mistreatment of the Jews at the hands of the Nazis.

The other half of the story makes a clown out of Adolf Hitler.  The dictator Hynkel has a Napoleon complex, and he struggles to intimidate those around him.  It’s hard to believe that a character as fickle as this one (at one point he pretty quickly decides not to exterminate the Jews before returning to that plan) could be capable of the horrors implied by the barber’s storyline, though of course Chaplin didn’t have to do much to connect the two stories considering they so closely traced real world events.

This half of the film mocks Adolf Hitler, and I imagine it must’ve been easier at the time to laugh at this section of the film than the other.  The point of the movie is to mock the Nazi dictator, and when we’re stuck in a single, large room of Hitler’s palace, we’re not forced to immediately acknowledge the horrors of what he was up to.  The pure destruction is at least off-screen for the time being, and that makes Chaplin’s customary physical comedy all the more funny.

And this is a funny movie.  There’s a scene in which Hynkel plays with an inflated globe like a cat batting around a ball (he even scurries up a curtain like a cat as well), and there are a number of amusing scenes as the small Henkel tries to one-up another visiting dictator (based on Italy’s Mussolini).  The film shies away from the pure evil demonstrated by Hitler and instead lampoons the leader as you would a President on Saturday Night Live.

The impact was not the way Chaplin mocked Hitler but just the fact he was willing to do it at all.

The film ends with a long speech delivered by the barber who is believed to be Hynkel.  The moment is heightened as if for comedy, but then the barber drops the guise, and he might as well just be Chaplin himself in the moment.  He delivers a long speech about humanity and the virtues of democracy, and the moment is meant to be anything but funny.  It’s a moment in which Chaplin drops the curtain for a moment, and you half expect the costume people to walk in and begin removing his make up as he speaks.

“I’m sorry, but I don’t want to be an emperor. That’s not my business. I don’t want to rule or conquer anyone. I should like to help everyone if possible; Jew, Gentile, black man, white. We all want to help one another. Human beings are like that. We want to live by each other’s happiness, not by each other’s misery. We don’t want to hate and despise one another. In this world there is room for everyone, and the good earth is rich and can provide for everyone. The way of life can be free and beautiful, but we have lost the way. Greed has poisoned men’s souls, has barricaded the world with hate, has goose-stepped us into misery and bloodshed. We have developed speed, but we have shut ourselves in. Machinery that gives abundance has left us in want. Our knowledge has made us cynical; our cleverness, hard and unkind. We think too much and feel too little. More than machinery, we need humanity. More than cleverness, we need kindness and gentleness. Without these qualities, life will be violent and all will be lost. The airplane and the radio have brought us closer together. The very nature of these inventions cries out for the goodness in men; cries out for universal brotherhood; for the unity of us all. Even now my voice is reaching millions throughout the world, millions of despairing men, women, and little children, victims of a system that makes men torture and imprison innocent people. To those who can hear me, I say, do not despair. The misery that is now upon us is but the passing of greed, the bitterness of men who fear the way of human progress. The hate of men will pass, and dictators die, and the power they took from the people will return to the people. And so long as men die, liberty will never perish. Soldiers! Don’t give yourselves to brutes, men who despise you, enslave you; who regiment your lives, tell you what to do, what to think and what to feel! Who drill you, diet you, treat you like cattle, use you as cannon fodder. Don’t give yourselves to these unnatural men – machine men with machine minds and machine hearts! You are not machines, you are not cattle, you are men! You have the love of humanity in your hearts! You don’t hate! Only the unloved hate; the unloved and the unnatural. Soldiers! Don’t fight for slavery! Fight for liberty! In the seventeenth chapter of St. Luke, it is written that the kingdom of God is within man, not one man nor a group of men, but in all men! In you! You, the people, have the power, the power to create machines, the power to create happiness! You, the people, have the power to make this life free and beautiful, to make this life a wonderful adventure. Then in the name of democracy, let us use that power. Let us all unite. Let us fight for a new world, a decent world that will give men a chance to work, that will give youth a future and old age a security. By the promise of these things, brutes have risen to power. But they lie! They do not fulfill that promise. They never will! Dictators free themselves but they enslave the people. Now let us fight to fulfill that promise. Let us fight to free the world! To do away with national barriers! To do away with greed, with hate and intolerance! Let us fight for a world of reason, a world where science and progress will lead to all men’s happiness. Soldiers, in the name of democracy, let us all unite!”

This wasn’t the original ending, but before filming ended Germany had invaded France, and Chaplin saw just how messed up this dictator was.  He would later say that if he had foreseen the full extent of Hitler’s evil, he might not have made the film.