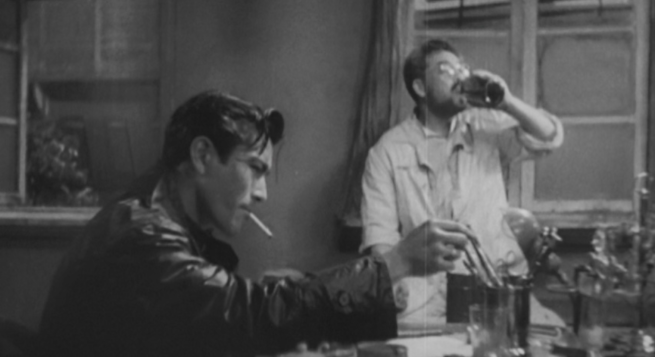 Drunken Angel has more heart than you typically see in a film noir.  It starts with a late night meeting between two alcoholics, one a doctor and the other a member of the yakuza (mafia).  When the doctor reveals that the gang member has tuberculosis, his prognosis doesn’t seem good.  By the time the film ends the sick man has died, and the doctor scoffs, noting that men of the yakuza never change.  Life then goes on as we assume it typically must in this world.

Laying out the broad strokes of the plot is not a spoiler for the movie (granted I spoil all of these reviews) because the real story happens in between the lines.

In the film noir we meet a jaded hero who has reasons to get his hopes up, but by the end something happens to crush his dreams and return his mindset to his status quo.  The jaded hero ends with much the same outlook on life as he had in the beginning.  Any happiness is either misleading or unsustainable, and life goes on with the same lack of joy as before.

I could try to delve into the origins of the film noir, though I only know so much about it, and I believe I may have tried to trace the origins in The Maltese Falcon (1941).  What I do know is that the genre originated with German expressionism and then carried forward by post-war circumstances that perpetuated a certain cultural weariness.  It’s the same kind of post-war circumstances that allowed for the growth of Italian Neorealism, a much different genre but one which captures a similar sentiment albeit through vastly different stylistic means.

Film Noir is a genre meant to capture the way people feel about the world though in a grand, elaborate manner.  Where something like Italian Neorealism sought to replicate life as people saw it (on-location shooting as one example), a film noir heightens and dramatizes aspects of the world perhaps once overlooked.  It’s like satire but for the more grim elements of society.

I think directors might adopt the film noir genre as just that, a genre, while other forms of filmmaking were looked to as the only means of communication.  There was never a film noir movement, as far as I know, in the same way as Italian Neorealism or the French New Wave.  Noirs have been made by directors who bounced amongst genres, like Billy Wilder (Double Indemnity), Howard Hawks (The Big Sleep), and here with Akira Kurosawa.  Before this film Kurosawa had directed a few samurai period pieces, a coming of age story and an intimate love story.  Nothing he had made to this point suggested any proclivity for a film as tonally sinister and bleak as this one.

Well, I suppose that’s not true, but I think it remains that were you to guess where his career was headed in real time you wouldn’t have seen this coming.  There are elements of the world of Drunken Angel in One Wonderful Sunday, and he had demonstrated an ability to capture sincere relationships within his stories.  Beyond the love stories there is an effective relationship between two men (a servant and a lord) in The Men Who Tread on the Tiger’s Tail, just as there is here.

The point is that there are similarities between Kurosawa’s earlier works and this one, but on the surface this is a very different movie.  I think there must’ve been a natural overlap between the noir genre and the story Kurosawa already wanted to tell.  He was living in Japan’s post-war era, after all, and the relative poverty in Drunken Angel is seen in One Wonderful Sunday and to some extent in No Regrets for Our Youth.

The jaded nature of a film noir captures some of what the characters in Kurosawa’s earlier films already felt.  The samurai of Tiger’s Tail surely feel the same dread as those in Drunken Angel, and Yuzo (One Wonderful Sunday) is outright depressed, much as the sick man in this film.

Alright, so you get what I’m trying to say, and it’s speculation anyways.

The doctor here is Sanada, and the yakuza dude is Matsunaga.  Through everything that happens, their relationship is the entire focus of the film.  Both of them are drunks, and they share the same initial impulse, to lash out at those around them, likely out of fear.

Because they’re so similar, they seem to see through the other’s facade.  Matsunaga goes to Sanada for a gunshot wound, but when the doctor observes that Matsunaga has tuberculosis, he takes a determined interest in the man, even as he recognizes his criminal lifestyle.

Sanada looks down upon the yakuza though not so much because of their violent ways as much as because he thinks anything with a supposed “code” is ridiculous.  Sanada is practical, and though he’s not entirely selfish, he certainly is looking out for his own needs and those immediately around him.  He acts based on his own personal instincts and memories.  If he has it in his mind to do something, you can bet he ran into a similar situation in the past which determines his behavior.

Matsunaga is younger and more hot-tempered.  He is glued to his yakuza code and the sense of honor he claims it gives him.  Because we’ve seen this character in other films and because of the character’s youth, we know that this commitment to the mafia was given to him, passed down by those above him.  In other words it wasn’t something he came to independently, and thus his behavior is determined by people outside of him, people whom we quickly learn don’t have his best interests at heart.

Like you’d expected in a genre movie there are elements of violence, romance and revenge.  Still, at its core this is a movie about two unlikely friends with conflicting world views.  It might be as much as what they stand for as much as the characters’ themselves, but I feel the reason the film works as well as it does is because of their friendship.

Look, this may be cheesy, but I fell for it.  There’s something so heartwarming about watching a gruff character let his or her guard down and embrace a new friend, lover or otherwise in their life.  And in Drunken Angel that goes both ways.

The title refers to Sanada, the drunken doctor whose kindness towards Matsunaga nearly saves his life.  The film as a whole was centered on Sanada, with Matsunaga as just a side character.  Akira Kurosawa liked the character’s performance so much that he made this a two-hander, bringing Matsunaga more into focus.  The film’s climax is centered on a brutal fight between Matsunaga and another member of the yakuza.

The mood is there from the start in this film.  Before we meet anyone we hear the ominous notes of a lonely guitar player.  The music might remind you of Wes Anderson’s Isle of Dogs, though that doesn’t say anything about this film except that it likely influenced Anderson, and I guess that could add weight to the legacy of this film.

So we meet that guitar player whose music echoes throughout the low-income neighborhood, giving everyone there an unwanted soundtrack.  When the movie’s villain enters the story long after he was first whispered about by the other characters, he makes his presence felt by grabbing the lonely man’s guitar and playing a new tune of his own.  The doctor’s assistant was this man’s old girlfriend before he went to prison, and the tune sends shivers down her spine.

Drunken Angel is a wonderful film.  It feels more accomplished than any other Kurosawa film up until this point in his career (granted that’s very subjective) mostly because the film commits to its tone.  Maybe the film only feels so self-assured because Kurosawa was borrowing the tone from other films, from the noir genre.  Perhaps he learned how to set the tone early on, and in future works he was more able to bring his own tone to the movie.  Maybe Drunken Angel is like Kurosawa trying on a hat then throwing it away and making a hat of his own.

It’s a good film, entertaining and sincere and worth the watch.