Overlord makes poetry out of existing war footage.  Around half of the 83 minute film pulls from sometimes grim but certainly striking footage of bombs, bodies and gunfire.  The other half patches together a brief narrative about a doomed young soldier named Tom.

These two halves are woven together in a way reminiscent of arthouse films like those of Andrei Tarkovsky.  There is breathy narration over dreamy imagery juxtaposed with moments more reminiscent of a documentary.  The film betrays any kind of conventional, narrative rhythm, but in doing so it creates one all its own.

It’s that sudden shift between moments in time and between reality, dream and Tom’s narrative reality which purposefully unsettles the viewer.  In doing so we are yanked along for the ride, and we learn how to experience this film on the fly like a child taking its first steps.

The film is a blender of two genres and their genre conventions.  We’ve seen war films, we’ve seen documentaries, and we know what to expect from both.  By combining these two, Overlord subverts any expectations we might have.  Tom’s journey is brief and ends suddenly before he can even get off the boat at the invasion of Normandy.  There is a minor love story, but any narrative momentum is quickly squashed.

The documentary footage of the war is often presented with little context (though none is necessary) and no narration.  The power of the image is enough, and the shots are often quite lengthy, forcing us to meditate on what we’re looking at, both to marvel and wince.

Many of these images come from the sky.  The camera films from the planes dropping bombs below, and because we don’t know who flies the plane or even what we’re flying over, the perspective feels omniscient, like the bombs are raining from God’s own fists.

This depersonalizes the war in a frightening manner, allowing the conflict to take on a personality of its own.  This isn’t about any one nationality or ideology, it’s just about the violence which, like the film, has its own momentum.  It doesn’t matter how it got started, just that it’s ongoing.

These aerial shots remind me of 2017’s Darkest Hour, the Joe Wright film about Winston Churchill and the looming German threat marching towards them.  That film makes Churchill into some kind of deity, the powerful central figure around which the storm roars.  In one memorable shot he scans the British streets from the safety of a luxury car, gazing in slow motion at people who can’t look back at him.  He is the omniscient point of view, the one with some kind of agency in an environment that makes powerless so many of the people involved.

I find it striking that Darkest Hour uses a similar visual motif as Overlord when its protagonist are in such different positions.  Ultimately they are both victims, under a similar pressure.  Though Churchill is in a position of power, Darkest Hour makes sure you understand that he’s sure as hell stuck between a rock and a hard place.  That’s why many of these aerial shots, many of which include warfare… 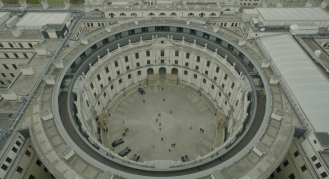 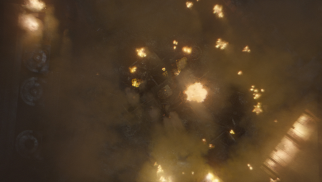 …culminate with Churchill looking up to the sky, as if acknowledging that which looms above him…

So Overlord is a different film, but it deals with the same sense of utter powerlessness and destruction, with characters attempting to quantify and maneuver around something with its own momentum.

In Overlord, Tom dies soon before the film ends, and the final shot is another aerial one, lifting up through the clouds from one of those bombing planes we saw earlier.  Surely documentary footage, the moment now carries narrative weight, meant to imply Tom’s soul floating off into the afterlife.

This is the first moment which explicitly combines the narrative and the real.  Before the two stories were connected in theme and tone, though now the practical realities of each melt into one.