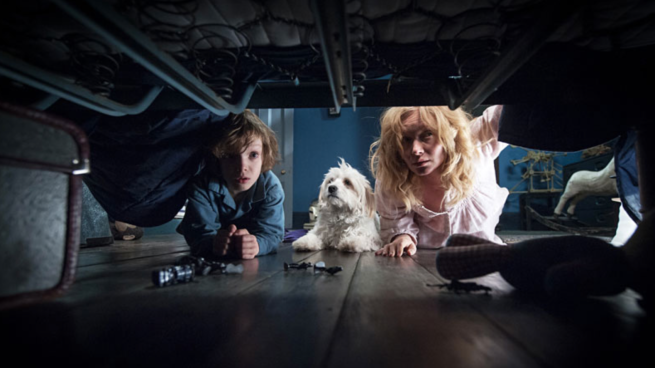 The Babadook takes place almost entirely inside the home shared by Amelia (Essie Davis) and her 6 year old son Samuel (Noah Wiseman).  They are isolated from the world when the story begins, and the ‘babadook’ only makes things worse.

The monster whose name gives the film it’s title comes from a children’s book Amelia reads to Noah early in the movie.  Amelia quickly discards the disturbing book, but Noah becomes concerned that the babadook is real and present.  Already at her wit’s end in regards to her son’s upcoming birthday and the painful memory of losing her husband on the day of his birth, Amelia’s mind begins to fray.

Because this is a horror movie, and because you likely know something about the story going into it, you know there is indeed a monster.  We keep waiting for it to show up, but the film is a slow burn, with much of the tension coming from moments that disregard conventional jump-scares.

Instead there is a feeling of intense dread throughout the whole film.  The monster never quite shows up in the form we initially expect, but Amelia’s fear soon becomes weaponized, and before we know it she is the problem.

I should have known something was off from the moment the story began.  Even casting aside the expected horror elements of the movie, Amelia and Samuel, isolated in that creepy estate, have a sort of Norma and Norman Bates vibe.  They are in their own bubble, each pushing away those around them when they act out due to a deep-seated paranoia.

Amelia alienates her sister as her fear that she’s being stalked continues to mount, and Samuel gets in trouble when he pushes his taunting cousin out of a tree house, breaking her nose in two places.

This kind of solitary confinement is not much of a surprise for this genre, but this isolation feels like it has much more to do with the characters than it does with the horror qualities of the movie.  In other words this is a movie about Amelia and Samuel that is so dreadful and frightening that it has to be a horror movie as opposed to a horror movie that contrives to put characters in situations for maximum suspense and shock.

Samuel is scared of the babadook, and his fear pushes Amelia to the edge, though it’s clear she is afraid as well.  The discarded book shows back up on their front step, accompanied by a mysterious knocking sound and an ominous phone call from a withered voice uttering the phrase repeated in the children’s book, “baba-dook-dook-dook.”

Everything that happens in the movie is laid out within this book.  It makes it clear that Amelia will become a danger to her own son, and before we know it her understandable fear has morphed into something else entirely, and she becomes the ostensible villain.

Samuel cowers from her as Amelia loses her grip on reality.  She is possessed by the babadook who appeals to her to bring the monster “the boy,” and by the end of the movie she will, with her brave son’s help, exercise the demon from her.

The Babadook is effectively the story of The Exorcist but told from the possessed person’s perspective.  We watch Amelia’s descent into madness, starting with a bubbling sense of apprehension to madness.  She becomes a danger to herself and her son and willfully alienates them from the rest of the world.

This is a creepy, sinister movie thanks mostly to Essie Davis’ performance.  Our relationship to her pivots continually throughout the film, going from the empathetic hero whose personal challenges endear us to her, to outright monster.  When she becomes the threat, the baton passes to Samuel as the hero for whom we root.

By the end we’re made to admire Amelia, and the final beat of the movie, one that is a victory but more than just a simple coda to the story, suggests the babadook might be a personification (or monster-ification) of Amelia’s depression.

There are clues that suggest Amelia wrote the children’s book which so torments her and her son, and Samuel’s fear of the monster is really just a fear of his mother’s illness.  We see Amelia snap at Samuel before she quickly tries to make up for it.  The point is made, however, that her despair leads to anger and isolates her from those around her.

By the end Amelia doesn’t defeat her depression so much as learn how to manage it.  The monster remains, but it remains under control, kept at a distance.